After a 30 year hiatus, the 2016 Bloomberg New Contemporaries has returned to the Bluecoat, Liverpool. The space works well with the installation heavy selection of art which has come mainly from the UK’s leading art schools. This year’s exhibition is again forming part of Liverpool’s Biennial 2016, of which New Contemporaries has been a partner since 1999, the annual touring exhibition will run from 9 July to 16 October 2016 before travelling to ICA, London, from 23 November 2016. 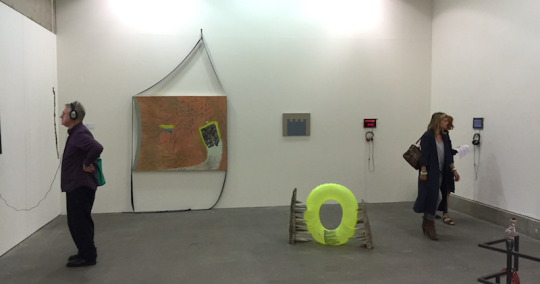 New Contemporaries is the leading UK organisation supporting emergent art practice from British art schools. Since 1949 it has consistently provided a critical platform for final year undergraduates, postgraduates and artists one year out of postgraduate study, primarily by means of an annual, nationally touring exhibition. Independent of place and democratic to the core, New Contemporaries is open to all. Participants are selected by a panel comprising influential artists and art figures, often including artists who themselves have previously been a part of New Contemporaries. This rigorous selection process considers the work within a broad cultural context. Byzantia Harlow ‘What You Know About Fresh!’ 2015 This year’s Bloomberg New Contemporaries brings together artists working across a range of media with traditional techniques and materials used alongside digital applications and processes. Themes including the mass-produced, socio-economics, gender equality and cultural identity feature, with the resulting exhibition being both a social commentary and an indication of this emerging generations’ preoccupations. 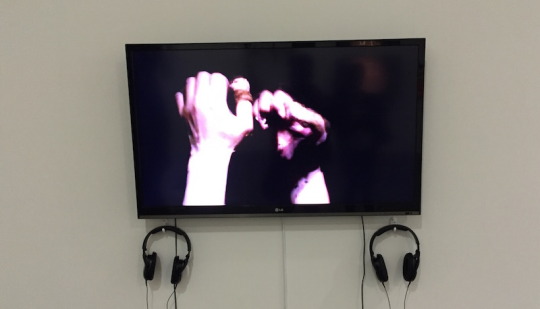 James Berrington explores social critique through the medium of photography. His still life photographs including Whitburn Orange Multi, (2015) are a response to the current housing crisis in the UK, reflecting Berringtonʼs own experience working in social housing for over 25 years. In his work Aylesbury, (2015) Michael Cox describes the contemporary landscape of London, a city in constant flux and renewal. In particular, he focuses on council estates on the brink of demolition, places with an architectural frailty, despite being made of materials optimistically used to defy the effects of time (concrete, steel, glass etc). Deliberately omitting the portrayal of people, Coxʼs paintings convey an eerie sense of suspense and emptiness. Both Kate Fahey and Mary Furniss illustrate the proliferation of the mass-produced digital image, with Fahey engaging with landscape through the possibilities offered by contemporary mass surveillance to create images, whilst Furniss, through her blend of collage, painting, dying and Photoshop explores mass production, distribution, digital technology and sub-cultural aesthetics.

Technology and social media’s effect on human-to-human communications and the potential to help or hinder gender equality is addressed by Ruth Spencer Jolly. We Can Work it Out, (2014) is a rewrite of the familiar Beatles tune of the same name. Spencer Jolly’s version speaks of online arguments and the unconstructive nature of aggressive debates on social media sites. 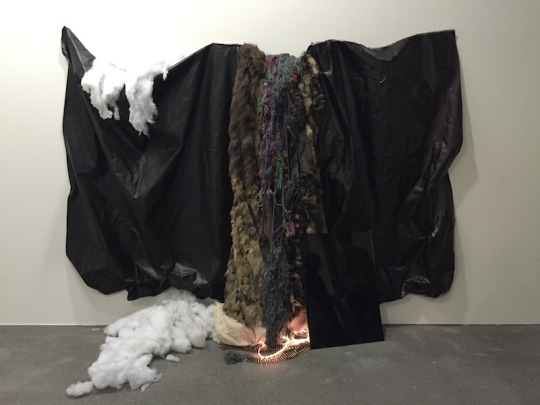 Identity and memory also play a role in this year’s exhibition with works by Alicia Reyes McNamara addressing the changing identity of the Latino diaspora within the United States, and the fine line between the collective memory of a homeland and personal and cultural mythologies. In turn, Zsofia Schweger explores notions of home and belonging, local identity, and the emigrant experience. Her first home in Sandorfalva becomes a motif in her paintings to explore memory, time and place. While Georgia Lucas-Goingʼs videos, installations and performances confront how identity and ethics are shaped by socio-economic and cultural disparities. Using humour, Lucas-Going draws from her personal experiences of growing up and living in her hometown of Luton.

This year’s Bloomberg New Contemporaries Director, Kirsty Ogg said; “Providing a professional platform for emerging artists’ work to be seen and discussed, this year’s exhibition demonstrates the continuing strength of work emerging from British art schools today. We are delighted to be showcasing this year’s New Contemporaries at Bluecoat after 30 years, with Liverpool Biennial providing an international platform for artists to be seen alongside the most cutting-edge contemporary art from around the world.” Adam Smythe, Curator at Bluecoat, said “This is a particularly significant moment for Bluecoat to welcome Bloomberg New Contemporaries, 30 years since the exhibition was last held here. Our partnership marks a shared commitment to championing emerging artists, and to working with them throughout their careers.  The impact of the 1986 New Contemporaries (formerly Young Contemporaries) still resonates; later this year Bluecoat will feature new work by Keith Piper, selected for this earlier edition. We look forward to following the progression of this year’s selected artists.”

With support from Bloomberg Philanthropies, this year’s participants will also benefit from access to a number of professional development opportunities intended to make their practice more sustainable in the long term. These include one-to-one and peer mentoring delivered in partnership with Artquest; a national network of studio bursaries; the shaping of elements of the public programme at ICA; and access to other partner projects such as Stop Play Record and Syllabus II. Bloomberg Philanthropies has supported New Contemporaries since 2000.