Right by White Cube in Mason’s Yard is the ancient green door, with the brass plate Jack Bell Gallery. Buzz, and the stale smelling but plush carpeted stairs lead up to the simple room with wonderfully large windows where the latest work by Boris Nzebo has been hung.

This is a plain, unpretentious exhibition – JCM

As I am the type of person, who can be averse to an over-gallerified atmosphere, so I’m happy to come here to see Nzebo’s work. The bright, cheerily coloured work looks fine in a house-sized room. 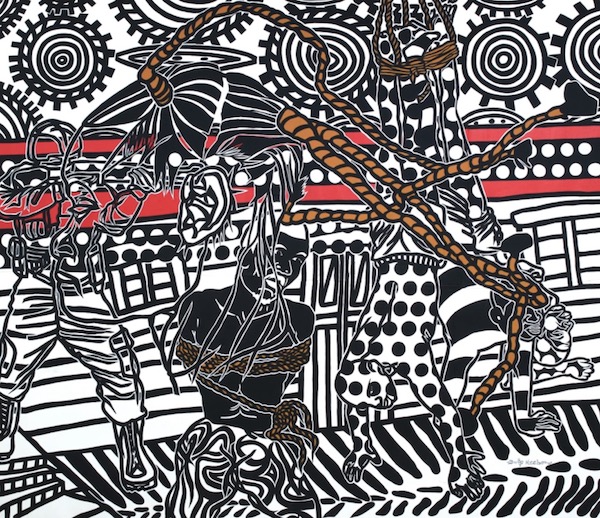 To the left there are signature paintings in his confident hand drawn brush strokes to my left, and to the right, three new pieces created by laser cut from his line. They use graphic patterns to fill in the toning, suggesting the form of the figure. Otherwise, these cutouts give outlines of figures. There are no faces, but they are not inhuman, or even creepy. They resonant talismans, powerful and clean, without the warm human feeling burned out of them.

The paintings use scenes from violent street events. Soldiers, war, knives, blood, vicious human on human encounter. On the surface, his acrylic canvases are bright and comforting. The more you look at them, the more disturbing they become. The tension works, but it takes a strong stomach to own pieces. However, why not? As someone who worked on the Reuters television archive for ten years, this imagery is familiar. But isn’t it familiar to every consumer of news, these days?

Boris Nzebo is from Douala, Cameroon’s largest city and capital of the Littoral region. It’s a modern coastal city with a tropical climate, and it sits on the estuary of the Wouri River. It’s a trading city, growing with a bright energy, its industry and population outstripping services. Nzebo paints this clustering of colour, figures working, sitting, sitting, talking hanging, trying to get money, supporting families, figures on the street consuming, hustling without an overwhelming presence of goods or the signifiers of modern wealth. The fire of people transformed into the rainbow colours of the acrylic palette.

In the early 1990s, Douala was the centre of the civil disobedience campaign called the ville morte in which economic activities were shut to make the country ungovernable. This was an attempt to force the government to allow multi-partitism and freedom of expression.

Is it wishful thinking on my part to see something of that in how Nzebo is working. The force of street-level economic activity within art, visualising the energy and therefore power of people in small shops and services, the garage, the cook, the painter. The language of Nzebo’s work draws on small business, I read. His style draws on painted haircut signs found outside barbers, and he appropriates tropes from advertising. I can see the influence of murals, I think, of wall art.

His style feeds from layering. The painting of a partly transparent image over another in a style we have learned from Photoshop and other software. This reminds me of another artist I know who creates large-scale murals in India. Poormina Sukumar who recently has been using computer-altered portraits of women as the source material for her inspiring paintings with a feminist message. Poormina’s wall art addresses the passerby in multi-coloured joy from a base of urban concrete. Look at us. We are here and full of human effort. We’re sparkling. I would like to see murals from Douala and see what the city is saying as well as witness Nzebo’s art here in the London Gallery.

The Jack Bell Gallery has been presenting Boris’s work since 2013. They have been committed to bringing his work to the British and international art market and supported his development through their longterm relationship with the artist. This may only be a small exhibition, a focused show, but it goes far further, with roots of acrylic paint digging into what is really happening today in a city in Cameroon.