Here, lumped together for the sake of convenience in an overcrowded Autumn season, are four London galleries. Three of them are part of the worldwide Gagosian empire. The other, situated in the West End, is Luxembourg and Dayan. Oddly enough, it isn’t Luxembourg and Dayan that ranks as the odd man out. What you can see there has a lot in common with what is on view at Gagosian Britannia Street and in the window at Gagosian Davies Street.

Basically, what the two Gagosian spaces just named have to offer is trophy objects. Three-dimensional items on a large or largish scale that are not quite sculpture in any traditional sense of that word. They command – one might say demand – dedicated spaces of their own. You might conceivably want to buy them – Gagosian is one of the most powerful dealers in the world of contemporary art and certainly knows everything there is to know about the market he is addressing – but it’s hard to imagine anyone wanting to live with them on a day-to-day basis. Being known to own these artworks would be a different matter: possession is power. 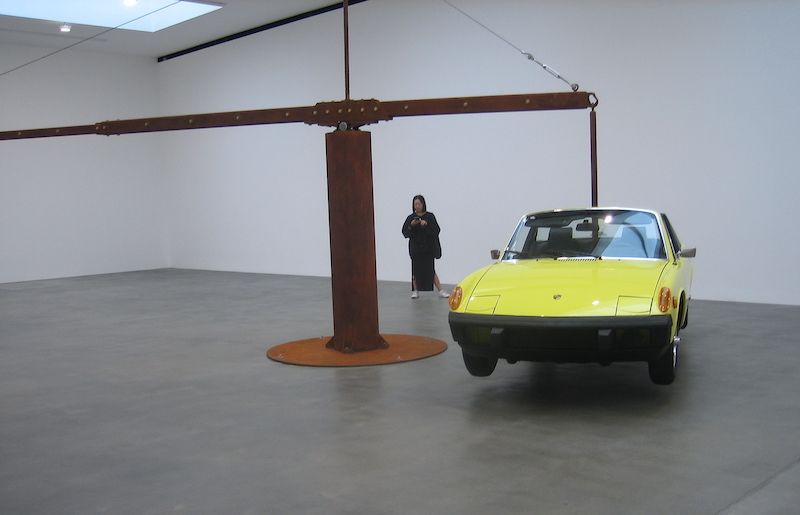 What do these displays consist of? At Gagosian Britannia Street there are two works by Chris Burden. One consists of a yellow Porsche sports car tethered to a beam and suspended off the ground. The suspension is dependent on a large meteorite, dangling off the other end of the beam and acting as a counterpoise. The beam itself pivots freely on a pillar. You marvel at the fact that the rock is so much smaller visually than the automobile.

In a twin space connecting to this one, there is a 1964 F350 Ford crane-truck. From its rear platform dangles a 1-ton weight, clearly marked as such. Chris Burden is no longer with us with us. He died in 2015, but he is still very much an icon in the world of Conceptual Art.

Meanwhile, in the window of Gagosian’s much smaller space in Davies Street, you can see a life-size wax figure of the Russian art dealer Dasha Zhukova, wearing a glamorous pink evening dress (Top Photo). The figure is, in fact, a huge candle, with a lit wick at the crown of its head, gradually melting away from inside. A purchaser will have the right, for an additional fee, to have the figure regularly renewed.

Currently, Luxembourg and Dyan are basically presenting two artists (there are also a couple of add-ons), in a show entitled Sublime Hardware. They are Dan Flavin (American) and Pino Pascali (Italian). ‘The American and the Italian artists,’ so the gallery tells us,’ both shared a particular sensibility towards the relationship between common, everyday materials and their unconventional expressions of sublimity.’

Flavin’s works made of clustered neon tubes are familiar enough, though new and improved methods of lighting are rapidly overtaking this particular kind of technology. Pino Pascali offers a life-size field gun from his series Armi – realistic artillery weapons made from wood and cardboard scraps. 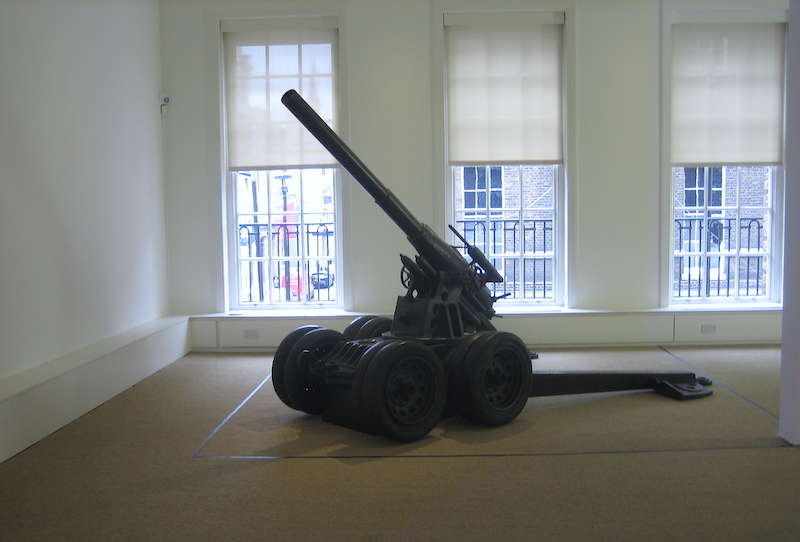 Sublime Hardware, so, the gallery web-site tells one, ‘considers how these two radical artists pushed the Duchampian notion of the Objet Trouvé (found object) into a new realm, namely that of the Monument Trouvé (found monument).’

Really Piascali’s aesthetic is not so far apart from Burden’s ‘found’ Porsche and ‘found’ Ford truck. And in his case too, the life-size field gun would as difficult to house in any kind of domestic setting.

To some extent at least, all but one works described qualifying as historical monuments – things not entirely of the present moment. Conceptual Art seems to have passed its peak. The exception – the figure of Zhukova – is busy melting away. That seems like a statement in itself. 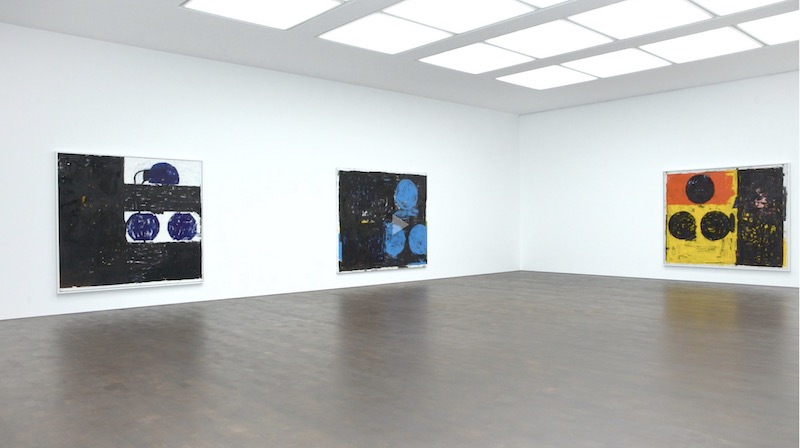 This is not the case with the artist currently on view at the third Gagosian space, the one on Grosvenor Hill, with a show called Day World. Artnet tells one that:
‘Joe Bradley is a contemporary American painter. In an eclectic studio practice, he explores notions of taste and skill through works often painted on commercial canvases, fluctuating between Twombly-esque scribbles, kitschy iconography, and hard-edge abstraction.’

In fairness, it must be said that there’s no kitsch here, whatever the artist may have done in the past. These are strong, handsome abstract compositions, ready to go over the fireplace or behind the sofa in any solvent art-lover’s living room.

The trouble is, quite simply, that these paintings don’t look in any way new. In fact, they look a lot less new than the struggles to escape from the established narrative of western art described above. Those may now look silly. These others alas, look stagnant.