BRAFA is known for its welcoming atmosphere, eclecticism and elegance

Reviewer at large Paul Carey-Kent reports on BRAFA Brussels Antiques & Fine Arts fair, which ran from 27 Jan – 4 Feb 2018. The Brafa Art Fair, created in 1956, is one of the world’s oldest and most prestigious art fairs, The first major art event of the year, it is considered a reliable barometer of the art market. The fair is known for its welcoming atmosphere, eclecticism and elegance. 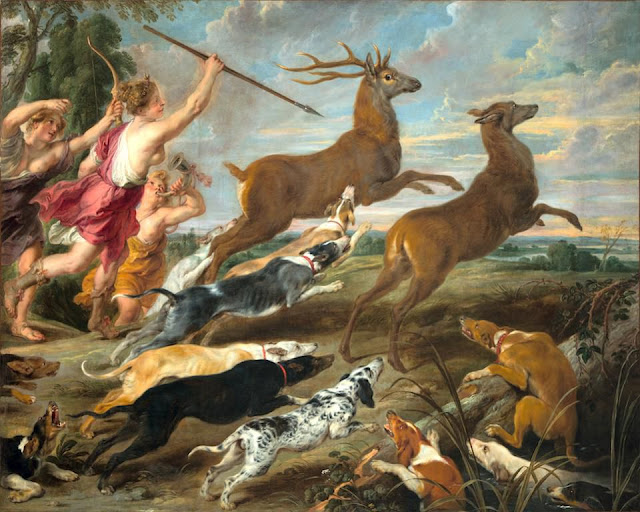 The Belgians have a strong collecting culture, so it makes sense that one of the leading fairs of antiquities and fine art is in Brussels, with 134 substantial stands ranging from ancient to tribal to renaissance and modern art with such specialisms as comics, tapestry and glass also represented, and a rediscovered Rubens collaboration as the star item (he commissioned a landscape from Jan Wildens and animals from Paul de Vos to go with his figures). The closest London equivalent would be Masterpiece, but BRAFA (Brussels Antiques & Fine Arts fair) – which has been running since 1956 – is double the size. French and Belgian galleries predominate, but fourteen other countries are represented. And it looks good, with a different carpet 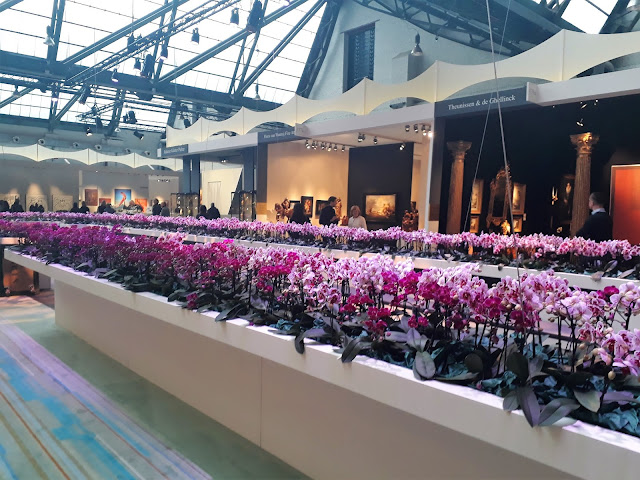 Designed each year following a competition for relevant students, and architectural installations of massed flowers.

In light of the ongoing Brexit saga, such a Eurofest might raise the question of whether we’ve lost out collective British heads. Here are a dozen picks from isolated heads to their absence, to various other bodily curiosities with leg, gut and even navel prominent. I’ve tried to reflect the considerable variety of the offerings under the restored warehouse complex of Tour & Taxis just north of the centre of Brussels. Africa, in line with Belgian tastes, features strongly. 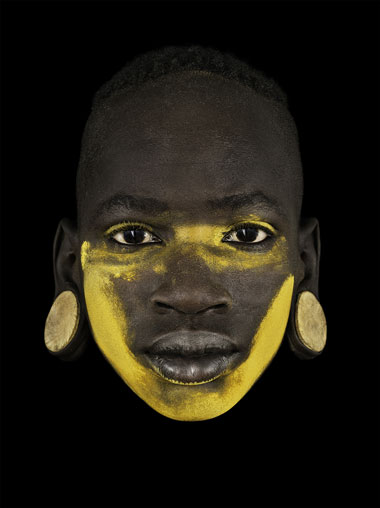 Antoine Schneck: Nakama, 2012 at Galerie A B, Paris

The French photographer Antoine Schneck has travelled to Burkina Faso, Mali, Ethiopia and Sudan with a white tent, to which he adds a black background, asks the subject to wear a black scarf, and triggers the photograph from outside to isolate the character in identical light without distraction. Digitally enhanced and blown up to over a metre high, Nakama made quite an impact. 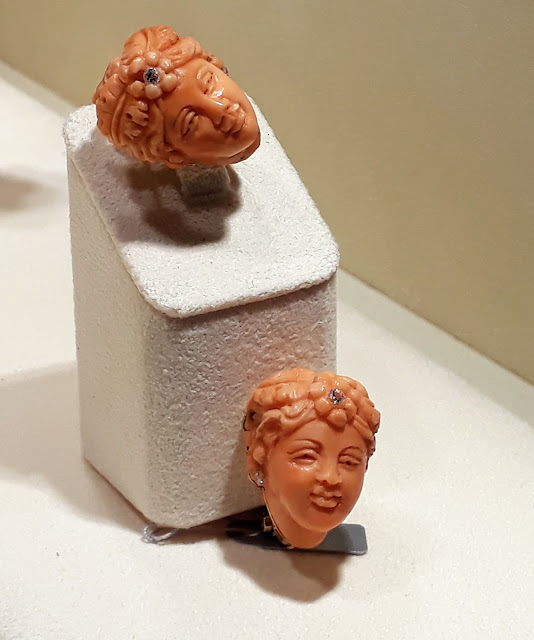 Jewellery was well represented, and as my wife likes earrings the curious idea of a coral head on each ear, both with their own diamond earrings in turn, was one of the more appealing possible purchases – though not quite to the extent of €4,900, cheap as that was by BRAFA’s standards. The piece is actually a 1950’s reconfiguration of parts taken from a 19th century Italian necklace. 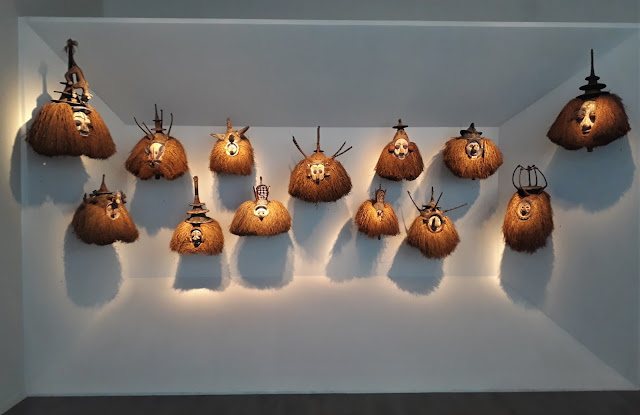 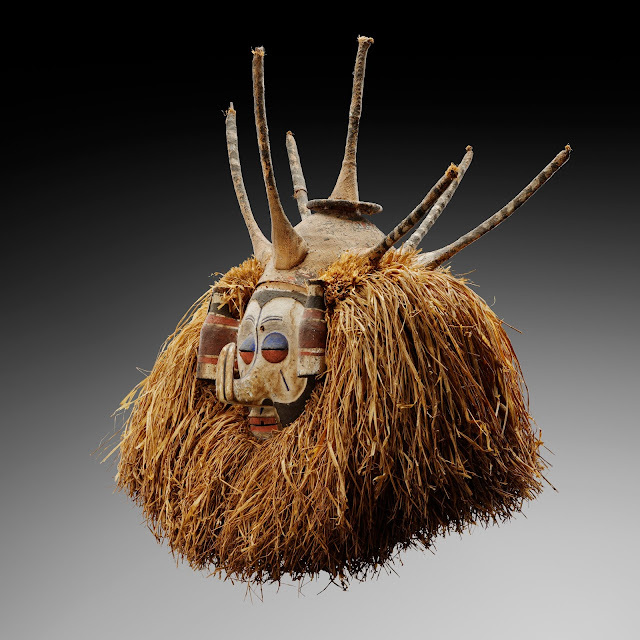 BRAFA has no ‘best stand’ prize, but a strong contender would have been Didier Claes for sourcing a dozen impressive Yaka masks from the Congo, all at least 50 years old yet complete with raffia fibres. They’re used for the ritual dances associated with circumcision and coming of age, hence the phallic-tending noses and the variety of sizes, different masks with differing powers being worn as the ceremony progresses. They sold out at around €15-20,000 each. 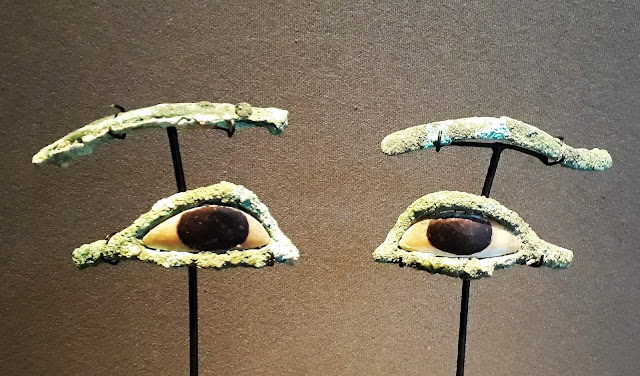 Here the head, or rather its mask, is merely implied: although precious metals were used for the long-lasting Tutankhamun, the masks buried in Egyptian tombs were often made of wood (but with bronze or stone eyes – which are now often all that remains). They were intended to resemble the deceased subject, albeit with the eyes slightly enlarged, so that the soul could recognise the body and return to it. 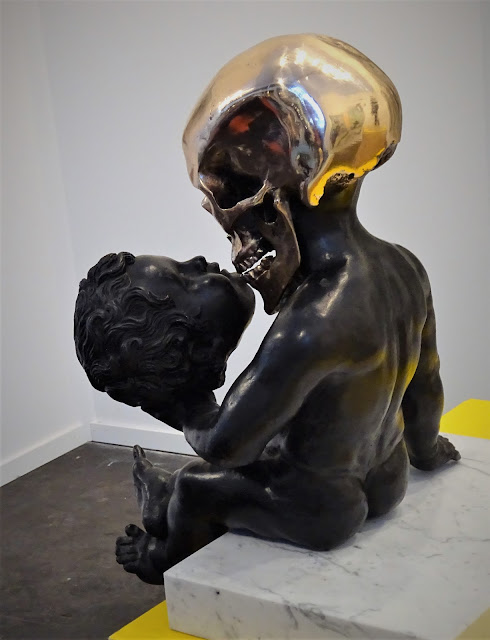 Irreverent Belgian artist Thomas Lerooy seemed to be suggesting end times for a certain vision of Belgium, judged by a series in which he out the piss out the Manneken Pis by replacing the iconic child’s head, in various poses, with a skull. This was at its most effective when the skull-headed child head his former head in a sort of reverse vanitas, consistent with Lerooy’s frequent interest in how, though aware of the briefness of mortal life, many seek to quicken its pace with such questionable choices as heavy drinking, 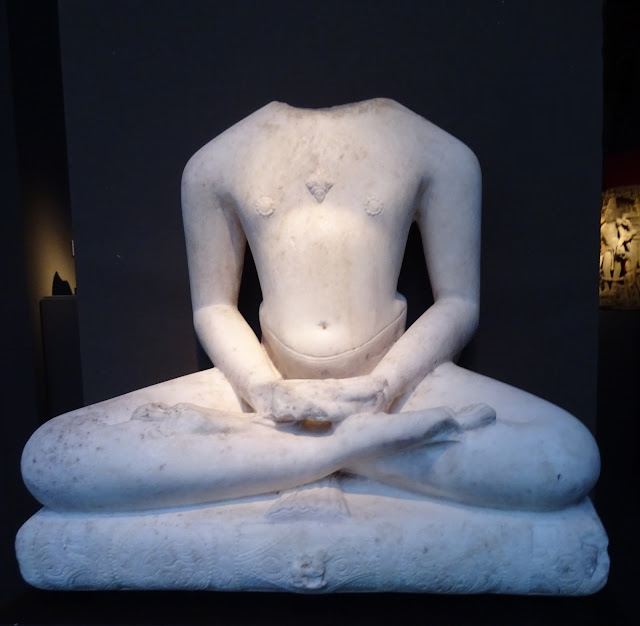 Ancient statues are often fragmented over time to poetic effect, and there were plenty of examples at BRAFA, This Janist figure stood out though: first, the removal of the head appears deliberate, perhaps the result of thieves hacking away the most easily transportable part of value. Less seriously, one might read the absence as the most radical means, beyond any possible meditation, of emptying the mind… 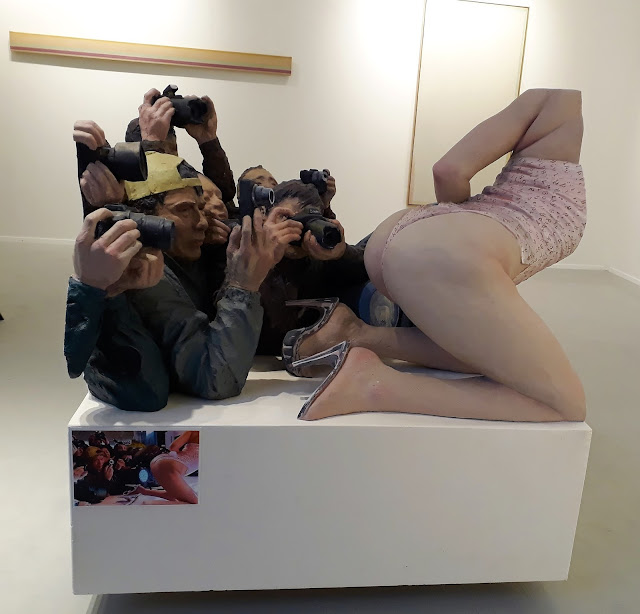 One of the crowd pullers was this apparently weird sculpture, which actually has its logic on display: rather as you / see figures cut off in Degas under the influence of photography, Wang Du has made his life-size tableau from a photograph of photographs being taken. It looks much less ‘natural’ than in the source, not being a language we’re used to seeing; and, as the model’s head is sheared away the most prominently, suggests a critique of the photographers’ focus. 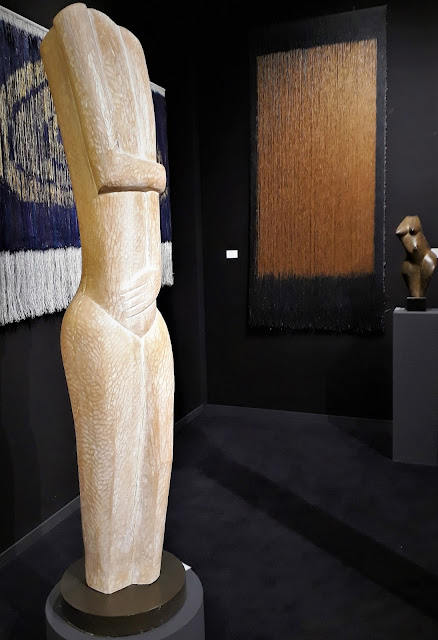 The Patinoire Royale’s backdrop was of three sculptures by the not especially famous Belgian sculptor André Eijberg (1929-2012) against weavings by the veteran Colombian Olga de Amaral (born 1932). Here you can see Secrète, 2000 (bleached beech wood) and Mater,1993 (bronze). Eijberg spoke of releasing his figures from tree trunks or blocks of stone rather than creating them, which makes it all the more curious that all eight examples I found at BRAFA were headless… 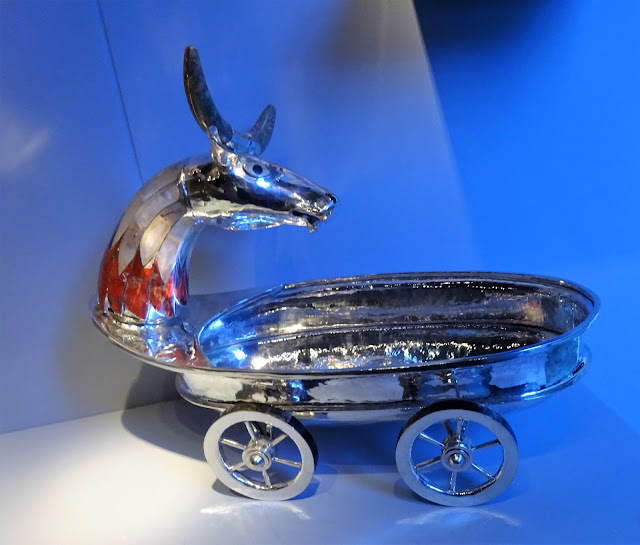 Now for a head unexpectedly present. Goudji is a Georgian metalsmith and sculptor who married the French ambassador’s daughter and, after a few years’ Cold War stresses, was allowed to emigrate to France in 1974. His striking productions are all usable, even if there’s no obvious reason for a fruit bowl to have a head or wheels, at least you know which way to roll it down the long aristocratic table. 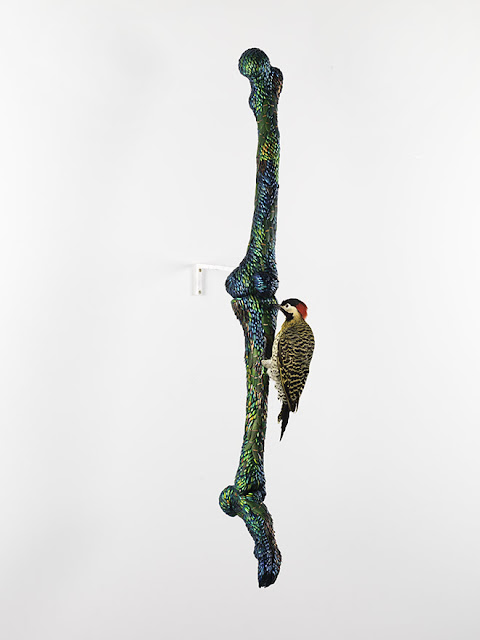 It’s no surprise to see the Belgian artist using iridescent jewel beetle shields – they’re his signature material over three decades, often in allegorical works pointing up the transformational effects of colonialism and the breaking free of it. Here the title points more towards natural cycles, with quite what effect I’m not sure, but the image of a woodpecker at work on a free-floating leg was one of the most memorable at the fair. 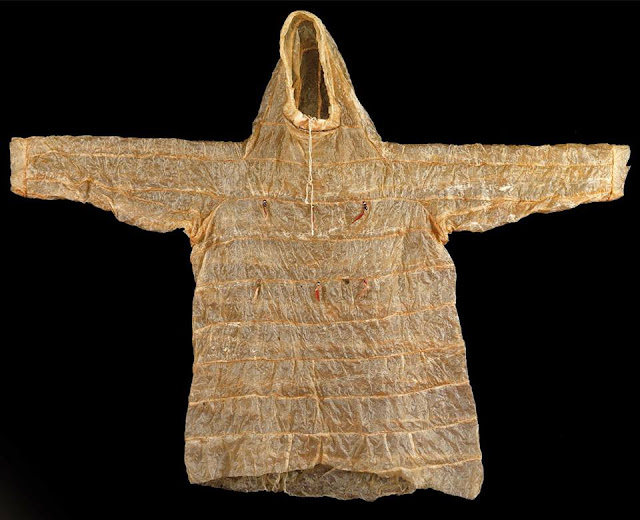 This protection from arctic extremes results from a month’s Inuit work: the seal’s large intestine had to be washed, scraped inside and out, then inflated and tied at both ends until completely dry before being cut longitudinally and rolled into tight bundles until ready to be sewn into very light waterproof clothing, big enough to fit over a fur parka. Could that crinkled look, presumably from years spent folded in a pocket, inspire a fashion some day? 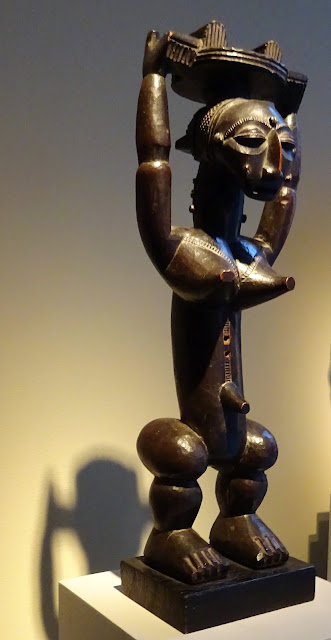 Moving on from the head, this 19th century wooden statuette from the Ivory Coast is attributed to the ‘master of the pretty breasts’, but I was more struck by the prominence of the belly button, which reflects both its symbolic role a font of family and the local tendency, exaggerated here, to cut the umbilical cord ‘long’ for exactly that reason. In my end was the beginning.