Two exhibitions of modest size – Bridget Riley at Lindsey Ingram, and Rebecca Parker at Huxley-Parlour – both at the very centre of the West End art district. They have one thing in common: the fact both artists are female. Plus real divergences, which symbolise the lack of any real direction in British art right now.

The Riley show consists mostly of black-and-whites from the 1960s – that is, just from the time when she first made her impact of the British art world, and indeed on the art world in general. There are also a few more works, from slightly later in the same decade, in shades of blue-grey. They are all prints, from small editions. What they demonstrate is the extremely sophisticated was in which Riley deployed the Op Art idiom she had found for herself. They are all very strictly abstract, though the compositions often suggest vertiginous motion. For example, one print, Untitled (based on Blaze), presents the eye with a whirling vortex, so violent that, having looked you have to look away, for fear of being drawn into its threatening core.

In this context, the fragments of classical sculpture scattered here and there in the exhibition seem a little beside the point Better to compare these prints to Damien Hirst’s Mandalas, on view in another London gallery, not far away from this one.

At a time when purely abstract art is increasingly under siege, frequently seen not, as it once was, as a statement about the future of the visual arts but as something that has reached a dead-end, these challenge ideas about abstraction’s irrelevance. They resonate with ideas about what the universe we live in is like – ideas that become more relevant as our knowledge about the cosmos advances. 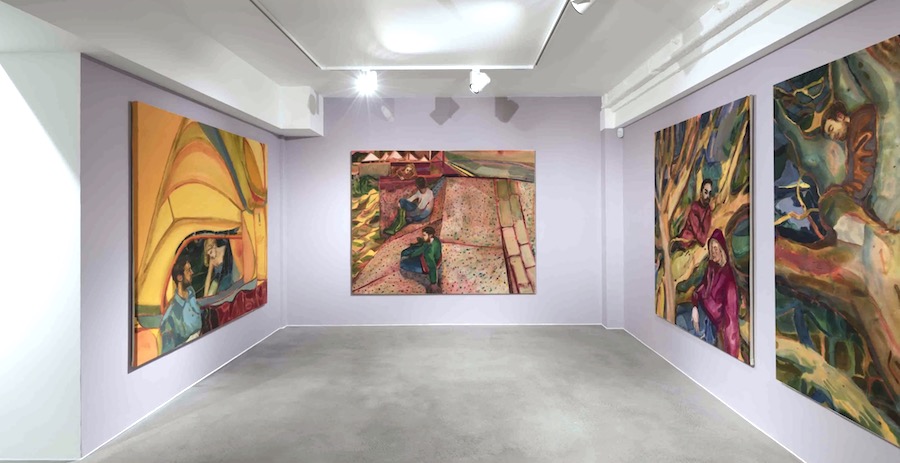 Rebecca Parker’s show, large figurative paintings jammed into a small basement space at Huxley-Parkour in Swallow Street, symbolises the generation gap in current British art, though this is not a comment that I mean in any way unkindly. Bridget Riley is now in her eighties, Huxley was born in 1989. She is, like Riley, British, and received her artistic education here in Britain. She has received a couple of prestigious awards, including a residency in Tuscany.

In other words, if Riley’s compositions sometimes set you adrift in one way, these do so in quite another. It’s lack of anchorage in social relationships that they explore, not lack of anchorage in an infinitely expanding universe. In these more limited terms, they do a good job.

What they do, however, symbolise for me is the lack of stylistic anchorage in a great deal of the art being made now. In terms of the actual language of representation – how, for example, the human figures within them are represented, they might have been made at almost any time in the last forty or fifty years. What is shown in interesting, but the visual language is not new. Given the current situation in the visual arts, maybe I am asking for too much when I say that.

The NPG has returned, more or less, to its traditional mission with its Elizabeth Peyton show Aire and Angels. The show spreads outward, with a series of additional displays within the primary collection. For example, “contemporary figures including David Hockney and Kurt Cobain will be displayed alongside figures such as Queen Elizabeth I in the Tudor galleries.” All very well meant, I’m sure. There’s also another kind of bow to history, with portraits ‘after’ Michelangelo, Delacroix and Burne-Jones. Plus, in the main exhibition, a contemporary likeness by an Unknown English Artist of John Donne. The contrast between this brooding, shadowy likeness of the poet, who seems to be receding back into his own time as one gazes at him, and the contemporary images around him, certainly makes one think.

There are two situations here. One is that contemporary – of their own time and place – portraits of the great dead tell one not only about qhat they looked like but also about how their contemporaries reacted to them. This is often true even if the portrait itself is not very good, regarded merely as art. Posthumous likenesses made a long time after the sitters are dead, are a somewhat different matter from these, even if the artist who makes them has lifetime images to help. Many later likenesses are the equivalents of religious icons, resonant with the legends that surround the personality portrayed. Though maybe a bit closer to the real appearance of their subjects than all those devotional images of Christ.

The other situation is this: that the artist who makes portraits today, cannot – even when he or she is making portraits of his or her contemporaries – escape from the insidious effects, both of contemporary ways of seeing and also of contemporary technology. If one looks, for example, at Elizabeth Peyton’s portrait of a youthful Napoleon Bonaparte, which happens to be placed side-by-side in an NG press release with her equally youthful image of Liam Gallagher, one immediately notes contrasting details, which in turn signal different approaches to the act of making a portrait. The image of Napoleon is presented in monochrome on a deliberately aged and ragged sheet of paper. It shows the whole of the subject’s head. Given that this is the work of a contemporary artist, we know from these hints that we are being asked to look at historical fiction.

The portrait of Gallagher is quite different in atmosphere. In full colour, it is cropped at the top of the head. This kind of cropping, in portrait images, is distinctively photographic. It signals that the viewer is being presented with a ‘slice of life’ – unedited and raw. It also indicates that the artist concerned has had an immediate confrontation with the sitter. Though this, of course, maybe a fiction, mediated by the use of a photograph. At any rate, we know, when we look at images of this sort, that they are from our own time, typical products of our own epoch.

While this is undoubtedly an entertaining show, with much to look at and think about, it also tends to signal that portraiture, painted or drawn, is now at crisis point. If we look at the past, there are many convincing images that have come down to us, which portray individuals who lived in that past, often in ways that seem to offer not only accurate information concerning what they looked like but also about their inner existences. In contemporary art, this skill seems to have fallen away. It has been replaced, at least in part, by photography, which not only gives a more reliably accurate record of human appearances, but also – dare one say it? – of the personality the camera records.