The new Bridget Riley show at David Zwirner is a knockout, and very much on trend, in the sense that it is yet another celebration – hot on the heels of Philip Pearlstein at Saatchi and Rose Wylie at Serpentine Sackler – of an artist of (ahem!) mature years.

One of the truly impressive things about Riley’s career in the sense of unhurried progression one gets from her work. One thing leads to another. Riley speaks of what she does as being a dialogue. First of all, her dialogue with the painting – the painted surface. Then the communication from the evolving image to herself, as she works on that image, exploring what it wants to do. There is a sense, when one looks at what is now at the Zwirner gallery that the paintings have willed themselves into existence, have employed the painter as their willing servant, to give them life, to make them come into the world. 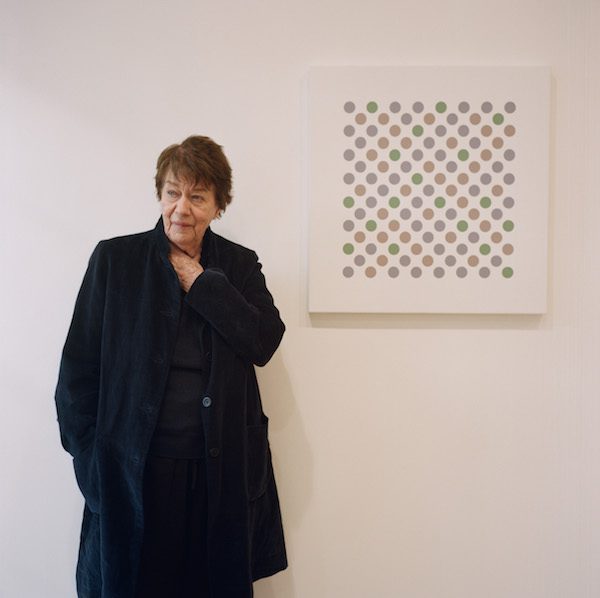 Every visual statement you meet in the show is very complete, uncompromisingly present. In an art world increasingly given up to autobiography – “the only subject I can think of for my art is myself – if not my actual physical appearance, then my psychology” (think Chuck Close and quite a number of leading German contemporary artists – they seem at first sight impersonal. Yet the fact is that nobody else could have made them. In this sense, the story of Riley’s art is that of autobiography raised to a higher plane.

When what is at Zwirner is compared to the artist’s earlier work, three differences seem to declare themselves, The first of these might be thought of as being a step backwards. There are quite a number of paintings in black-and-white monochrome, in this sense resembling some of Riley’s earliest Op Art pieces. But there are large differences from those earlier compositions. They are very big. The eyes move laterally across then, and it seems as if the patterns they offer could be prolonged at will. This differs from the earlier black-and-white works, which tend to be tightly centred. This effect is enhanced by the fact that the black and white patterns are not on canvas, but are painted directly on the wall, after the manner of the wall drawings of the American Minimalist Sol LeWitt. The change seems to emphasise the fact that the painting is to be regarded, not as an object, but simply the embodiment of an idea, whose ‘reality’, if one can actually use this word in the context offered, is metaphysical. As you look at it, it exists in two places: in the artist’s head, and in your sensibility as you look at it. Your reaction shifts as you move in relation to the very large works, experiencing from different angles. This shift as accentuated by the fact that the building blocks, the small forms from which the composition is made up, are triangular, but one side of each triangle is not a straight line but a curve. 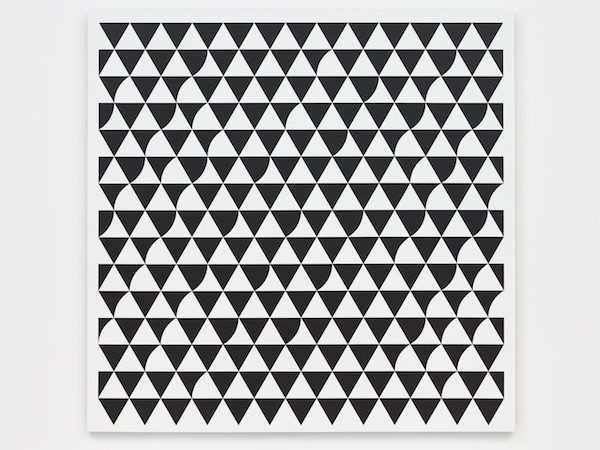 The third difference manifests itself in the paintings where colour is used. These consist of regular rows of small circular forms, in this sense resembling some of Damien Hirst’s Spot Paintings. The hues employed are muted, often not immediately identifiable by a specific colour name. The way in which the spots ae organised is firmly geometric. You can read them as horizontal or vertical lines, but also, even more easily, as criss-crossing diagonals. Some of the lines – diagonal ones, not many – are all of the same colour. The patterning as a whole is not random, or in any way capricious, but it takes quite a lot of looking to work it out.

Once again, as you look, you find yourself involved in an act of collaboration. Bridget Riley is an artist who comes out to meet you, and then she draws you in.