Few in the West will have been to Tehran. We are either likely to think of an exotic Persia full of sultans and hareems – the sort of orientalism debunked by Edward Said in his celebrated essay – or a modern-day Iran, a strict theocracy run by repressive Ayatollahs not too keen on our western ways. In fact, during the last century, few societies have experienced such a period of rapid modernisation as Iran. This is demonstrated by the rich flow of artistic ideas from within and without the country.

In 2014 AB-ANBAR was set up in Tehran to create a platform for emerging cutting-edge artists and serve as a conduit between Iran and a broader global culture. The aim was not just to give voice to these artists but to create a dialogue with their occidental counterparts. In Tehran, the gallery’s primary audience consists of local artists and collectors, so the aim here is to introduce contemporary Iranian art to a wider world.
Situated at 4 Cromwell Place, AB-ANBAR’s current exhibition Cacophony is a showcase for four contemporary and modern Iranian artists, Sonia Balassanian, Majid, Fathizadeh, Mohsen Vaziri Moghaddam and Timo Nasseri. The underlying concept is the inherent chaos and turmoil embedded within contemporary societies—the white noise of conflicting values and points of view. The wide range of work, from the chaotic painterly scenes of Fathizadeh to the experimental films of Balassanian and the modernist compositions of Timo and Vaziri, emphasise this diversity. 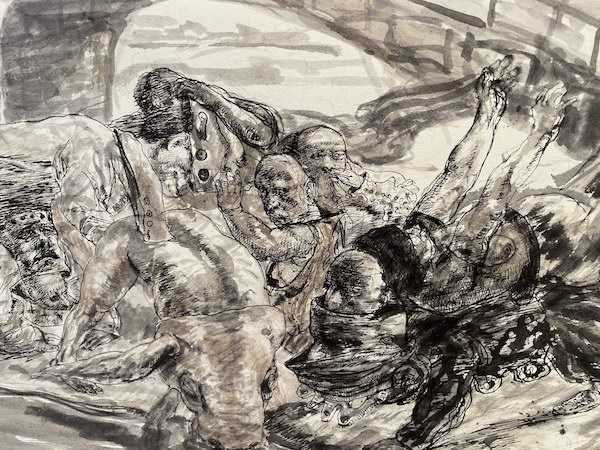 Sonia  Balassanian is a multimedia artist living and working between New York and Armenia whose practice took a dramatic turn after the 1979 events in Iran, turning an abstract painter into a political activist whose work has evolved to address issues of identity, gender and cultural contradiction. Here, her work consists of two diametrically opposed forms: video and abstract paintings made up of layers of acrylic paint or mixed media marks on photographic paper that contain echoes of Agnes Martin. But whereas Martin or  Balassanian ’s compatriot, the painter Shirazeh Houshiary explore the spiritual sublime and the ineffable, there’s a sense that Sonia Balassanian ’s marks are more an act of erasure, a cancellation of something much darker. A deliberate deletion or form of emotional redaction of what is unsayable. The stanza structure of her lines references her practice as a poet, implying both rhythm and metre. Alongside these are three powerful videos: Chain, 1995 that emphasises her interest in ritual with a tough black and white close up of a Shia adherent engaged in the repetitive act of flagellation; 1555, 2009 a cacophony of three intoning voices that speak of the Armenian genocide in Farsi, Armenian and English and Haghpat 2, 1999, a stark, grainy video of naked bodies emerging from deep ceramic pots buried in the ground that seems to imply disappearance and re-emergence.

The modernist works of Mohsen Vaziri Moghaddam stand in stark contrast to this psychodynamic output. The large aluminium, wood and painted wall construct, Untitled 1968-2015, conjures the fenders of shiny American Cadillacs and speaks of the ubiquitous optimism of modernity during that period. It evokes a world of shiny skyscrapers, American diners and jukeboxes, of new buildings and new possibilities. In contrast, his aluminium and yellow-painted wall sculpture, with its Fontana-like slashes, castes subtle ribbons of shadow in the negative spaces, playing with notions of inside and out to create a severe minimal beauty.
Born in Berlin in 1972, the son of a German mother and an Iranian father, Timo Nasseri grew up between two radically different cultures. Living and working in Berlin, drawing lies at the heart of his practice. He uses the influence of Islamic art, mathematics and geometry to explore systems of patterning and the architectural structures within infinity and chaos. A series of small black magnetic cut-outs – the silhouettes of frogs, axe heads and bats – displayed in a group on a white wall have something of the ethnographic museum about them. Entitled The Order of Everything, it suggests some sort of arcane hieroglyphic language which, if only the code could be cracked, might reveal the mysteries of the universe. Repetition is a strong aesthetic stimulus in Nasseri’s work reflected in his steel towers held together only by magnets, one of which is suitably entitled Babel #3. While his ‘totemic’ paintings in flat blacks, blues and reds take their inspiration from the ‘dazzle’ camouflage used for warships in World War I.

Majid Fathizadeh is based in Iran and employs the language of European Old Masters to explore not only the disasters of war but of the destruction of the biosphere. Pool Table 2021 is a painting full of dark sepia tones and tenebrous shadows. At once, absurdist and bleak, his cast of Goyaesque characters crawl around upturned, broken pool tables wearing strange masks and what appears to be a dunce’s cap. While Tendon shows a rabble of figures – refugees or outlaws, it’s hard to say – huddled on a hilltop overlooking a benighted landscape that appears to be the city of Tehran. A highly skilful painter and draughtsman, he encapsulates the diversity and reaches of contemporary Iranian art.

Cacophony AB-ANBAR June 2, 2021 – June 13, 2021 An exhibition featuring the work of four contemporary and modern artists from their gallery programme; Sonia Balassanian, Majid Fathizadeh, Mohsen Vaziri Moghaddam, and Timo Nasseri. Founded in 2014, AB-ANBAR is one of the leading independent galleries in Tehran