Upstairs, on the third floor of the Ashmolean, is a show that will quietly break your heart. Entitled Pissarro: Father of Impressionism (12 June 2022), this major exhibition of works drawn from the Ashmolean’s collections as well as international loans, spans Pissarro’s entire career. Incorporating works from all the major figures of his generation – Corot, Monet, van Gogh, Degas, Cassat, Seurat, Signac – it casts Pissarro as the creative anchor to a group of radical visionaries, most significantly Cézanne.

We understand that kindness – and not painting – was his primary talent.

Exhibition curator, Colin Harrison, says: ‘Camille Pissarro is unique among the Impressionists. His work rewards close and careful attention that reveals a hugely sympathetic and humane artist.’ In highlighting the congenial generosity and selfless enthusiasm of the man behind the paintings, Harrison underlines how this fatherly figure influenced the history of art – a galvanising force of his generation. And yet, seeing Pissarro’s paintings in dialogue with major works of art from the era’s star players, one cannot help but compare. We understand that kindness – and not painting – was his primary talent. 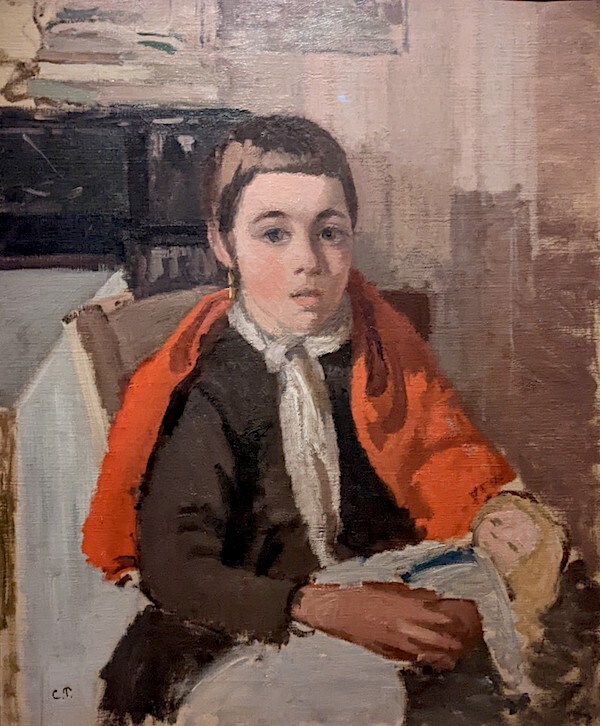 Portrait of Jeanne 1874 by Camille Pissarro

This is most keenly felt in the third room of the exhibition where Pissaro’s The Cote des Boeufs, l’Hermitage, Pontoise, 1877 hangs next to a painting of the same title, painted in the same year by Cézanne, clearly the superior of the two for its innovative brushwork and compositional balance. The wall text next to the paintings tells us that the artists met at informal classes held at the Académie Suisse in 1861, and remained friends throughout their lives. “Cézanne frequently walked from his house at Auvers-Sur-Oise to spend the day working side by side with Pissarro at Pontoise… Both artists are working with short, staccato brushstrokes, creating an almost abstract effect. Towards the end of his life, Cézanne said that it was from Pissarro that he learned to work properly. ‘Old Pissaro was a father to me. He was someone to go to for advice and something like the good Lord.”

Less of a stylistic leader and more of an enthusiastic champion of the era’s greatest artists, one might see Pissarro as a father to the impressionists rather than father of any specific ‘ism’.

As if to reinforce this, next to these two works is Cézanne’s masterpiece Milk Can and Apples, 1879, which represents a step beyond Impressionism – capturing momentary and transient effects of sunlight en Plein air – in exploring how the mind intervenes in what we perceive. “Cézanne shows the table as if seen simultaneously from the side and from above, which is impossible in a single moment but does correspond with how we might experience looking at a table of objects.” All other works around this painting only serve to frame its superiority, and yet to understand the exhibition as a comparison would be to miss the point. In showing these works together, Harrison asks the viewer a straightforward question: what would the art world be without its patrons, teachers, and champions?

Perhaps art historian John Rewald’s description of Pissarro as the “dean of the Impressionist painters” is more fitting, not only because he was the oldest of the group but also “by virtue of his wisdom and his balanced, kind, and warmhearted personality”. In 1873, Pissarro helped establish a collective society of fifteen aspiring artists, becoming the “pivotal” figure in holding the group together and encouraging the other members. What gave him this enormous capacity for insight and empathy might have something to do with his formative years.

Born in 1830 on the island of St. Thomas (Danish West Indies), his father, Frederick Abraham Gabriel Pissarro, was of Portuguese Jewish descent and his mother, Rachel Manzano-Pomié, was from a French-Jewish family on the island. After attending the local primary school, at 12, his father sent him to the Savary Academy in Passy, outside Paris. Monsieur Savary proved his first mentor, giving Pissarro a firm grounding in drawing and painting, then encouraged Pissarro to draw from nature when he returned to St. Thomas. Those early works show a remarkable sensitivity to local colour and fluctuation of light. At twenty-one, Pissarro befriended the Danish artist Fritz Melbye, living on St. Thomas, who inspired him to start painting full-time. Pissarro then followed Melbye to Venezuela, where he spent the next two years filling up sketchbooks of landscapes, village scenes and local characters in Caracas and La Guaira. This experience would not only prove fortuitous later in his relationship with the artist Gaugin but gave him a practical introduction to the fundamentals of Impressionism and an expanded view of the world beyond the strict codes of the Salons in France.

In 1855 he returned to Paris as assistant to Fritz Melbye’s brother, Anton, and enrolled in various classes taught by masters at schools such as École des Beaux-Arts and Académie Suisse. But Pissarro eventually found their teaching methods “stifling,” according to Rewald. This prompted him to search for alternative instruction, which he requested and received from Corot. Through this, Pissarro had his first painting accepted at the Paris Salon. Still, it also reinforced his belief in expressing on canvas the beauties of nature without adulteration. Increasingly, he would leave the city to paint scenes in the countryside, trying to capture the daily reality of village life.

In 1971, after the outbreak of the Franco-Prussian War, he moved to England. It was there, in Croydon, that he married his mother’s maid Julie Vellay, with whom he would have seven children (all six surviving would become painters). They lived in the village of Norwood before returning to Pontoise in France until 1884. Tragically, when Pissarro returned to his home in France after the war, he discovered that only 40 of the 1,500 paintings he had done over 20 years remained. Might we have found proof in this loss of his fathering of style? One cannot know, but Pissarro soon reestablished his friendships with the other Impressionist artists of his earlier group, including Cézanne, Monet, Manet, Renoir, and Degas. It was here that the real ‘Salon’ of Impressionism existed. Consequently, Pissarro suggested an alternative to the Salon so their group could display their own unique styles. In 1873 he helped establish a separate collective, called the “Société Anonyme des Artistes, Peintres, Sculpteurs et Graveurs,”.

One of the highlights of this exhibition is how it draws on the Ashmolean’s Pissarro archive, revealing intimate and fascinating details about Pissarro, his artist-friends and relatives. Through numerous works on paper, we can admire Pissarro’s draughtsmanship and gain a rare insight into his character in the small detail of a stamp. Pissarro and his contemporaries made etchings in the print studio of their friend Dr Paul Gachet, who had set up a press in his attic. Each artist chose a personal symbol to sign their work: Gachet chose a duck, Guillaumin a cat, Cézanne a hanged man and Pissarro a small flower. Like his stamp, Pissarro’s role in the Impressionist movement was “less that of the great man of ideas than that of the good counsellor and appeaser …”

So why did Pierre-Auguste Renoir refer to Pissarro’s work as “revolutionary”? Pissarro insisted on painting individuals in natural settings without “artifice or grandeur”, and it is in his artistic portrayals of the “common man” we find our answer. This is most powerfully evidenced in a portrait of a young girl in the second room of the exhibition. Dark hair cropped short serves to emphasise wide innocent eyes staring straight out and through you; the doll she holds limply looks like it might slide off her knees. Painted in 1874, it depicts his daughter Jeanne (known as Minette), who died of a fever aged just nine. Her hair had been cut short to keep her cool. Her parents were devastated by her death, yet this loss only enhanced Pissarro’s nurturing, paternal instincts.

This heartbreaking revelation underscores Harrison’s aim to show Pissarro “as the galvanising force that propelled modern art forward and without whom there would have been no Impressionism.” However, what this exhibition makes manifestly clear is that Pissarro was not the father of a style but had the vision to appreciate the greatest talents of his generation and so enabled them to flourish. Importantly, in opening with works by Corot, this retrospective also honours the artists and mentors that helped shape Pissarro’s creative life. The success of this exhibition rests not in the qualification of individual greatness but in the question its title raises: does anyone achieve greatness alone? One thing is certain, without the kindness of a collective spirit, we may never have seen the many extraordinary paintings on display at the Ashmolean.