Two current exhibitions seem to suggest that it can. Nature Morte at the Guildhall Art Gallery London explores both the history of the still life and contemporary applications to invite viewers to pause, look anew at the human condition, and confront what it means to be human. Coming Out: Sexuality, Gender & Identity, at Birmingham Museum and Art Gallery, explores the contribution of art to documented change in relation to social attitudes towards the LGBT+ community.

Michael Petry, ‘possess a mortal edge but not a moral one.

Nature Morte displays a visually enticing selection of artworks that, in the words of curator Michael Petry, ‘possess a mortal edge (but not a moral one), often velvet-covered and not usually obvious at first sight, but one that hints at death – always around the corner, in the next mark, or slightly out of frame.’ 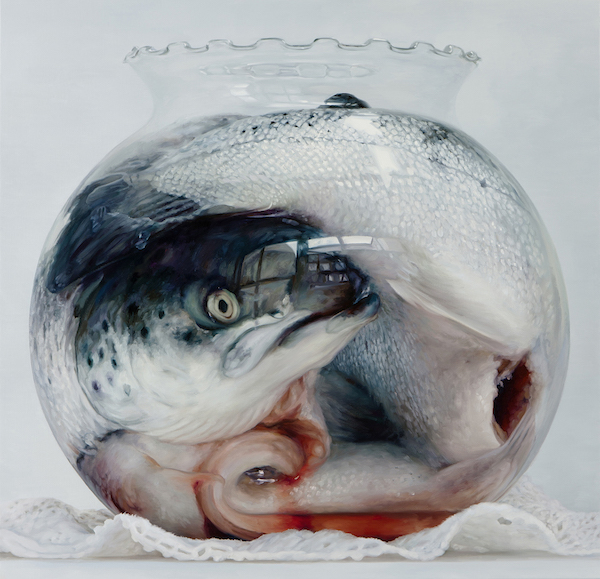 Exhibition viewers are confronted with the questions, what is real and what is representative. Cindy Wright’s paintings of food challenge the viewer with the reality that eating meat and fish comes at a cost, the death of once-living creatures. The bloody, gutted fish coiled within a goldfish bowl stares out of the frame in an accusatory fashion. Meanwhile, Nancy Fouts incorporates taxidermy animals into her surreal works; Still life + real life (2011) is a seemingly classic still life of a flower arrangement yet on closer inspection a painterly collage with butterflies emerges. This exhibition also includes prominent British artists such as Mat Collishaw; his startling photograph Last Meal on Death Row, Texas (Juan Soria), (2011) is part of a series staged to resemble seventeenth-century depictions of food or lavish spreads. In actual fact, it documents the last meals requested by prisoners on death row in the United States. Each work is named after the prisoner who asked for the featured dish for their last meal. So, the contemporary works included in Nature Morte explore the timeless themes of life, death and the irrevocable passing of time in our modern world thereby putting a new spin on the traditional topics of still-life – flora, fauna, the domestic object, food and Vanitas. These are contemporary artworks that seek to use the language of the past for modern audiences.

As such, they draw heavily on the Christian, and more generally religious, origins and development of still life. Paintings of mounds of fruit and other foodstuffs adorn the walls of ancient Egyptian tombs to illustrate the bounty that will greet the dead in the afterlife. In Greek and Roman dwelling such painted or mosaic displays illustrate the wealth of the buildings’ owners and the bounty of life. From the late fifteenth century onwards, such paintings became popular in the context of Christianity utilising the once-secret language of symbolism that the Early Church had developed in periods of persecution. 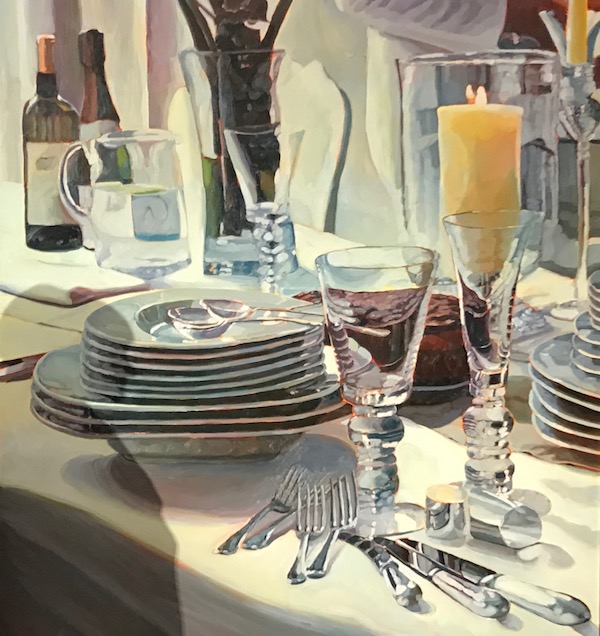 As an independent genre of painting, the still life came into its own in the mid-seventeenth century when the Flemish term stilleven first came to be applied to oil paintings characterised by their tight focus on an assortment of objects sitting on a flat surface. Yet, as Petry notes in his book Nature Morte (Thames & Hudson, 2016), it ‘would be left to the French, some one hundred years later, to coin the name most suggestive of the layered symbolism of the genre and its poignant reminders of the transience of life and the ever-present threat of death: the still life became known as the nature morte, literally ‘dead nature’. The vanitas still life was one result, where a skull, watch, hourglass or burning candle reminded viewers of their own mortality and the need to uphold their integrity in this world before facing the judgement of God in the next. At the time, these coded meanings could be read as easily as the Biblical scenes viewed in church or cathedral.

Nature Morte is, therefore, an argument for understanding our Christian and, more generally religious, beliefs, traditions and practices in order to continue to confront in contemporary forms the reality of mortality and the impact that this reality has on our understandings of both the human condition itself and the impact human beings have on the world we inhabit. Coming Out marks 50 years since the partial decriminalisation of male homosexual acts was passed in England and Wales (1967 Sexual Offences Act), on 27 July 1967. Curator of British Art at National Museums Liverpool, Charlotte Keenan McDonald notes that: ‘In 1965, shortly before some of the first artworks in this exhibition were made, 93% of those surveyed in an opinion poll said they saw homosexuality as a form of illness requiring medical treatment (Weeks, 1977, p.30). Fifty years later, in 2015, 23% of British people chose something other than 100% heterosexual to define their sexuality, with the figure rising to 49% among 18 to 24-year-olds (Dahlgreen, 2015). These statistics reflect how social attitudes have changed and reveal the shift towards a more fluid understanding of sexuality in the 21st century.’

The exhibition explores the contribution of art to this change in social attitudes. Keenan McDonald states that Coming Out showcases the results of several years of research to ‘make visible the themes of sexuality, gender identity and queerness that lie at the heart of some of Britain’s most significant contemporary works.’ She says that, both at Birmingham Museum and Art Gallery and in its earlier form at the Walker Gallery Liverpool, the exhibition forms part of a greater ambition; ‘to make queer British art and its importance to art history permanently visible within our galleries.’ As such, visitors to the Birmingham exhibition can also see new interpretations within the permanent displays (through the Coming Out Gallery Trail) in order to show, through the collection, ‘that LGBT+ history is everybody’s history.’ 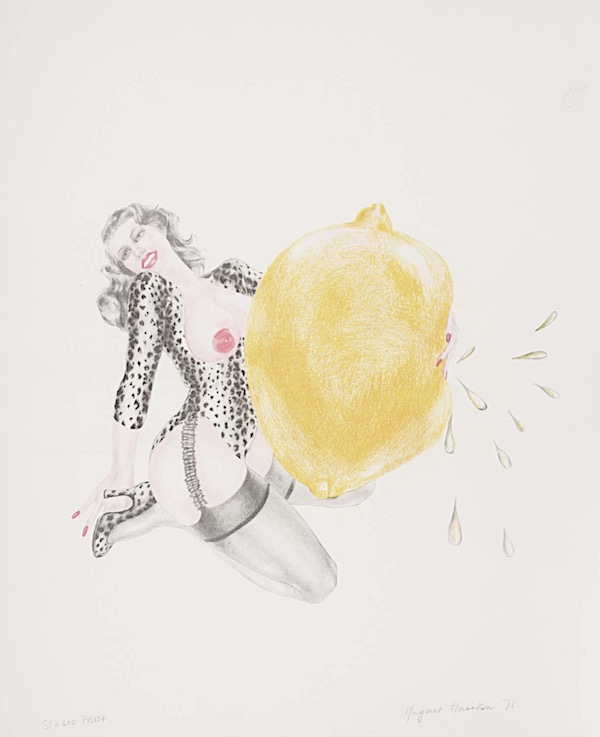 Works on display in Coming Out include feminist art by Margaret Harrison, provocative works by Linder and Marvin Gaye Chetwynd, arresting photography by Sunil Gupta and Maud Sulter, along with a number of audio-visual works by artists including Isaac Julien, Hilary Lloyd and James Richards. A striking Arts Council Collection installation piece by Anya Gallaccio, titled Can Love Remember the Question and the Answer (2003), is included. The work comprises a pair of mahogany doors. Prior to display, 60 gerbera flowers are inserted within the window panes of the doors. During the run of Coming Out, the gerberas will decompose.

The exhibition also provides an opportunity to see a number of new acquisitions for the Walker Gallery, recently acquired through Art Fund’s New Collecting Awards. These include part of John Walter’s Alien Sex Club, designed to encourage conversation and raise awareness around HIV and its transmission, and UK Gay Bar Directory by Hannah Quinlan and Rosie Hastings, an AV piece presenting footage of 180 gay bars across the UK, intended as a response to the gentrification of the gay scene in London, and the closure of many historic and popular venues.
Two works by Turner-prize winning artist Grayson Perry are presented together for the first time – Claire’s Coming Out Dress (2000), and his ceramic pot Who Am I? (1996). Both artworks provide an important insight into Grayson’s exploration of his own identity. From the coded symbols and personal dialogue in his ceramic pot of 1996 to the declaration of his transvestite public persona, Claire, in the intricately designed party dress from 2000, which he wore to mark his emergence as a transvestite to the art world.

Coming Out also has a strong representation of female artists, including iconic works from Sarah Lucas. Lucas’ works explore her identity as a woman and sharply critique gendered stereotypes and two of her satirical and striking sculptures, for which she is best known, feature alongside her iconic Self-Portrait Series (1990-98).

Keenan McDonald ends her essay by noting that the ‘artworks in this exhibition do more than tell a history’. The something more that these artworks do is what the works in Nature Morte also seek to achieve; ‘invite us to question and reflect on our own identity.’ Therefore, she argues while ‘art can help us understand how society has changed … it can also enable us to see the world differently, offering insights into personal experiences beyond our own.’ These exhibitions suggest, therefore, that for the transformative power of art to be fully unleashed, we need to understand the histories, stories and traditions (both recent and past) on which it draws.