It is easy to dismiss the world of the ancestors and appeasing gods in a post-scientific Western society.  Less so when burdened with a culture and history as oppressive as that of the white South African.  Our shared past cannot simply be ignored, even if we were mere witnesses to it and can nurse a new narrative response to it. In a small selection of works currently on view at Ma-Wah, Continent, by artist Carla Raffinetti, invites us to reflect on the past as we suckle, forging our way out of the abyss.

Here is an art firmly referencing in tribal tradition yet liberating it into the new age.  Autobiography of a Continent is suggesting a life where servants are hidden in cages within the halls of privileged white; while the eyes of the child are lost to the joys of the wonders around her they are also protected from the crumbling opulence.  Aksum (ax ‘em) hints at the reality of the darker narrative: tried, tortured and murdered; Darkness renders the white wife systematically subjugated. 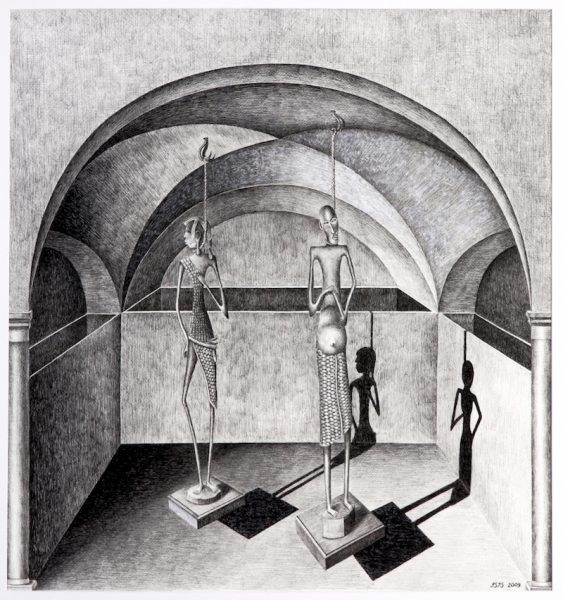 But what if we could appease the gods?  Proudly rising, Life, a year later reminds us that we are not hostage to our past.  Erotico suggests that the same subjugated women could break the cage, albeit carrying scars; keenly aware of her own history, set out not to apologise but rather liberate the feminist from the oppressors.  The fertility casts Ninavanhu-Ma and Eroticon could not be better matched: mother nurturer, oppressed in a caged, mother liberator, carrying the scars of her making.

The technical beauty of the drawings (Aksum (ax ‘em) and Autobiography …) demands a viewing.  These works explore the paths tracked by society’s quest for healing and restitution with skill and subtle complexity. Due to its placement, the two sculptures, unfortunately, lose their engagement.  These would have been better served raised to eye level.

The Artist states; “ A large part of my art practice is rooted in social commentary. The backdrop to this is that I grew up in South Africa during the Apartheid era. Being raised as part of a coloniser community left me with some profound questions about the meaning of identity and my place in this world. This experience also prompted me to query other metanarratives more generally – those grand beliefs that so many of us take for granted – whether they be about the supremacy of a particular race, a continent or a religion.”