May you live in interesting times is the overarching theme of this year’s Biennale. Dystopia and dissonance are everywhere played out in the themes of climate change and post-human CGI that take us to some dark places. This 2019 Biennale could well be the last when Great Britain (as we are still called in the Biennale catalogue) is a part of Europe. So the choice for this year’s Pavilion being a Northern Irish artist, who lives in Scotland, is interesting. Working across the media of sculpture, painting and installation Cathy Wilkes was nominated for the Turner Prize in 2008, won the inaugural Maria Lassnig Prize in 2017 and has already represented Scotland at the Venice Biennale in 2005.

In contrast to the big political statements of many of the other pavilions, she has stuck with determinedly autobiographical themes. There is no mention of Brexit, of global warming or the rise of the far right. Instead, using the most fragile of materials, she returns to that creative well-spring, which has fed artists and writers from Louise Bourgeois to Proust, childhood. Her uncanny installations evoke places of loss transformed through the prism of memory. Often they are occupied by beings of unspecified age or gender. 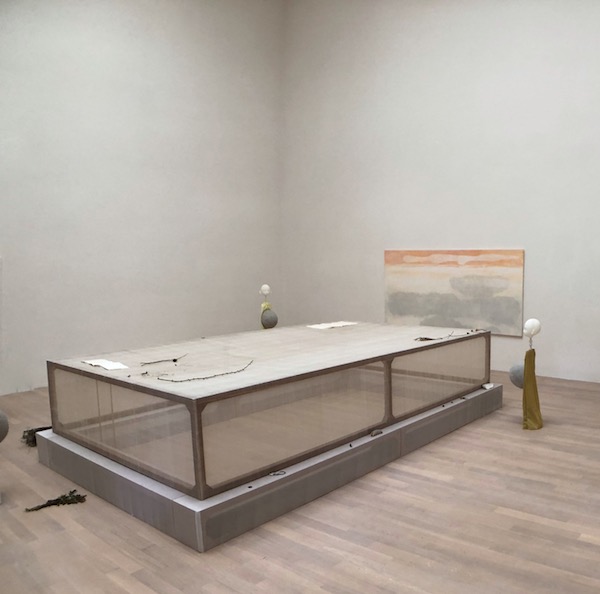 Constructed with ‘non-art’ materials, in the tradition of arte povera, her sculptures are distinctive and personal. In the first gallery, the viewer is confronted by a wooden frame covered in thin white muslin. Placed on and around this are tiny objects: a dried grasshopper, a twist of silver paper, a two pence coin, an empty toilet roll, and a grubby hair band. This is the sort of detritus found when cleaning out the kitchen drawer. The discards of the domestic, the things we forget. Strewn over the muslin are sprigs of dried flowers and grasses that conjure Ophelia’s offerings of rue and daisies to Hamlet, “withered all when my father died.” Small tokens of memento mori not, here, for a lost father but for a past self. Also surrounding this empty muslin tomb are several enigmatic figures who, with their bald-baby ET heads and clip-on pregnant stomachs, appear like a chorus of detached, yet observant witnesses. 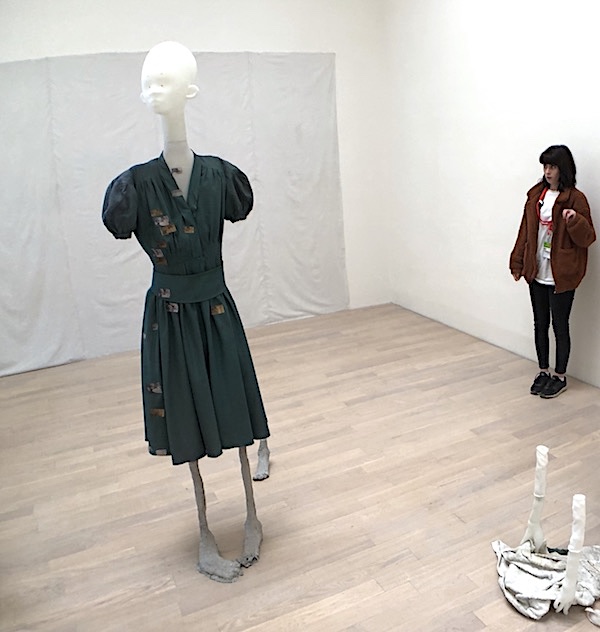 Elsewhere a pair of amputated arms clutch a dirty white towel. They might be mopping up a muddy kitchen floor after a stream of children, or the dog has just marched in from the rain. Another arm pokes from a cheap washing up bowl. In its hand is a well-used Brillo pad. This mirrors the daily ritual and oppression of women’s work, creating a reflection of the unsung actions that make up domestic life. A vintage green dress sits on a tailor’s dummy in the centre of the gallery covered in small photos. They show a child in a handmade knitted hat sipping soup. The same image appears on the wall opposite, a homage perhaps, to the relentless nurturing of the feminine.

Throughout the pavilion, the props and ephemera of suburban life: cheap crystal jugs and bowls, flowered crockery and grubby net curtains, a broken sheet of glass reminiscent of the kind to be found in many a modest suburban front door, have been decontextualised and used to invoke the melancholy of nostalgia. The past, this work seems to imply is, indeed, another country where they do things differently.

Wilkes own statements concerning her practice are somewhat gnomic. She’s said that “I solemnise and dignify the ghosts of interference which proceed from their origin and whip themselves up before me. I observe, they nucleate and propagate. If I could disappear, how fluid, how graceful and unending, how undisturbed and unpredictable would be the changing patterns thereabout.”

I’d very much hoped to interview her as her subject matter is close to my own heart as a poet, but she does not give interviews. This is a pity. For exploring the thought processes of an artist through mutual dialogue can often provide a deeper understanding of their practice. I did, however, manage to catch up with Emma Dexter, Director of Visual Arts at British Council for a quick word in a quiet spot behind the pavilion. Did she, I wondered, feel that the sense of personal loss implicit in Wilkes’ work could be read as a wider metaphor for the national losses of Brexit? In response, she insisted, the British Council’s role was not political and that Wilkes was chosen by a team of curators solely for ‘the urgency of the work’. Her elected mutism could, she suggested, be considered as an extension of her ‘non-hierarchical’ practice, in which she is concerned with ‘the erasure of information’. ‘There is,’ she added’, a certain musical quality in the different registers of her found objects’. 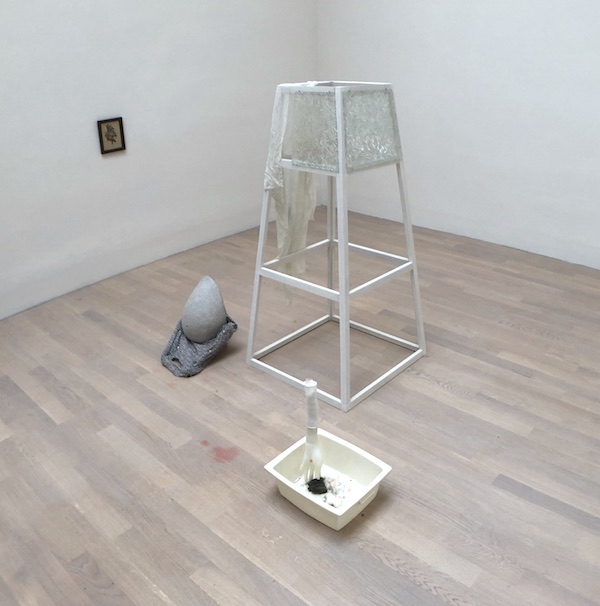 At her best Wilkes brings a nostalgic resonance to the ephemera she appropriates from daily life, giving voice to what has been discarded and ignored. In her hands, the Brillo pad becomes a madeleine that resurrects the forgotten, and half-remembered. In contrast, the paintings included here seem unnecessary and a bit laboured. This is a mixed show. There are, indeed, some quiet, reflective, poetic moments but they would probably be more suited to the intimacy of a smaller space. Over six rooms, the whole is spread too thin and never quite gets to grip with the architectural scale of the pavilion.

Sue Hubbard is an award-winning poet, novelist and freelance art critic. Girl in White Cinnamon Press:
Her latest novel Rainsongs is published by Duckworth. Her fourth collection of poetry is due from Salmon Press in 2020.