The Cezanne portrait show at the National Portrait Gallery follows hot on the heels of the show of portraits by Soutine currently on view at the Courtauld. In many ways these two shows are apparently much more conventional than other current London exhibitions, such as the major panorama of work by contemporary artists represented by the Lisson Gallery, now available at the Vinyl Factory, or the, in some ways rather similar, Age of Terror: Art Since 9/11, just opened at the Imperial War Museum. Yet both the Cezanne portrait show, and the Soutine exhibition, represent a paradigm shift in attitudes to art. Part of this shift is due to the artist themselves. The rest has been due to us – the audience.

The Cezanne exhibition shifts attitudes in two ways. Until very recently, the NPG was pretty much a place where you knew what you were going to get – second, third or fourth-rate likenesses of British worthies, painted by people of much less importance culturally (or otherwise) than the people whose portraits they made. Now that has changed – the emphasis at the Cezanne show is on the word ‘portrait’ – what a portrait is and what it does. It has nothing particularly to do with the adjective ‘national’. It’s not remotely about anything British. The show will, in fact, go on to two other venues, both arguably more important internationally than this one: the National Gallery of Art in Washington, and the Musée d’Orsay in Paris. In other words, the NPG is determined to break out of the narrow role that was once automatically assigned to it. 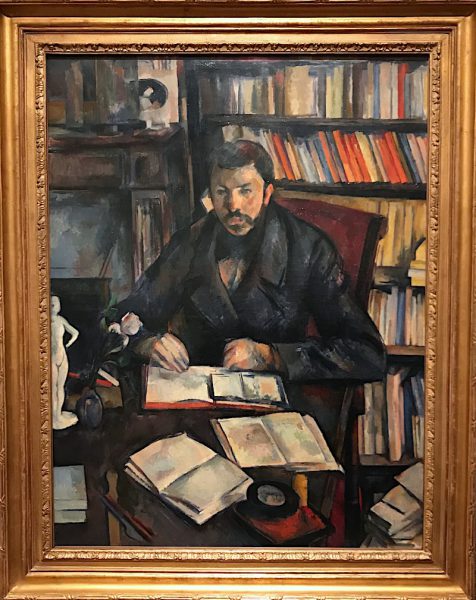 This comes at a time when there has also been a change in attitude to portraiture. For a long time, certainly from the early 16th century until well into the 19th, making portraits was one of the chief ways in which artists made a living. With the arrival of the Modern Movement, making portraits fell out of favour. Photography increasingly became the preferred way of making a likeness. The fact that the professional portrait painter remained very much tied to the wants and wishes of people who paid him to make their likenesses more or less ruled him out as contender for Modernist honours.

Portraiture increasingly became a minor genre – a kind of side-issue. This was reinforced by the rise of abstraction in art. An abstract picture could perhaps be a representation of a state of mind, even of a psyche, but it could never claim to offer a human likeness that, even in general terms, the lay audience would immediately and unequivocally recognise.

Without intending to do so, the recent Howard Hodgkin exhibition at the NPG exposed this problem. With the late, very unspecific paintings in that show, the situation was that you were told by the exhibition labelling and also by the catalogue about the personalities they supposedly represented, but all you could do was to murmur: ‘I believe you – thousands wouldn’t’. The works themselves offered no proof.

The NPG Cezanne exhibition, with paintings dating from a time when Modernist attitudes were already subversively in motion, but before they had fully established themselves, demonstrates how solutions were found. Artists and audiences alike remained interested in paintings that directly rendered human essences – recognisably, in figurative form. Artists, however, increasingly insisted that the focus should be on their own perception of the relationship between artist and sitter, but not necessarily, or sometimes at all, on the declared subject of the work, or, indeed on that subject’s possible reaction to the way in which they had been portrayed. The painting showed a figure. This is how the artist saw him or her. That was justification enough for the labour creating the image.

What is noticeable about the Cezanne show – reinforced if one has seen the Soutine show immediately previously – is the issue of class. The portraits by Soutine at the Courtauld are of hotel personnel: cooks, waiters, page-boys, valets de chambre. Cezanne gradually moved through making portraits of friends, then of his wife and son, to the late, often anonymous portraits, made at a time when he was a comparatively wealthy man, thanks to the inheritance he received from his father. We seem to know the name of only one of the sitters who falls into this late category – Vallier (no forename), who, the catalogue tells one. ‘helped Cezanne in the garden and around the studio’. Other works from this phase are often described, in the catalogue and on museum labels, simply as ‘peasants’.

‘There is a tendency,’ the catalogue note tells one, ‘to see these paintings [of Vallier] as a final statement. A last gasp from the painter before he dies. They are also read with unusually autobiographical references, a kind of conflation of the crusty old gardener and the increasingly unsocial, cranky old painter.’ This seems to me wishful thinking.

It’s clear that neither Vallier, nor any of the other anonymous sitters who fall into this category, had any say in how Cezanne chose to portray them. The paintings are not reciprocal. This is not democratic art, any more than are Soutine’s likenesses of hotel employees.

Somewhat before this final phase, Cezanne made a long series of paintings of his wife, Hortense Fiquet. The earliest of these date from the late 1870s. The latest was made in 1888-1890. In all, the subject seems in varying degrees closed in on herself, deliberately blank. Cezanne and Hortense were together (at least in a sense – they often lived apart) for a long time – they met in 1869, just before the Franco-Prussian War, and finally married in 1886. She long survived him, dying in 1922. In later years, living not with her but with his mother and sister, Cezanne remarked: ‘My wife cares only for Switzerland and lemonade.’ He nevertheless made no fewer than 27 portraits of her. Several groups of these can be seen at the NPG exhibition. Hortense haunts the exhibition like a sphinx, a tribute to the unknowability of other human beings.