Chantal Joffe Victoria Miro London: In his seminal 1972 book Ways of Seeing, the late John Berger claimed that: ‘A woman must continually watch herself…From earliest childhood, she has been taught and persuaded to survey herself…She has to survey everything she is and everything she does because of how she appears to men, is of crucial importance for what is normally thought of as the success of her life. Her own sense of being in herself is supplanted by a sense of being appreciated as herself by another…One might simplify this by saying: men act and women appear. Men look at women. Women watch themselves being looked at…Thus she turns herself into an object — and most particularly an object of vision: a sight.’

Joffe asserts her right to be herself, someone who inhabits her unique presence, her own skin not for another, least of all for a man – SH

Berger argued that the ongoing connection between post-Renaissance European painting of women and contemporary sexualised posters and images in girly magazines determined our understanding of femininity. The contemporary woman portrait painter, therefore, has to deal not only with the mechanistic and aesthetic problems of paint and picture surface but with the weight of this legacy. She has to ask who and what she is painting and who that painting is for. 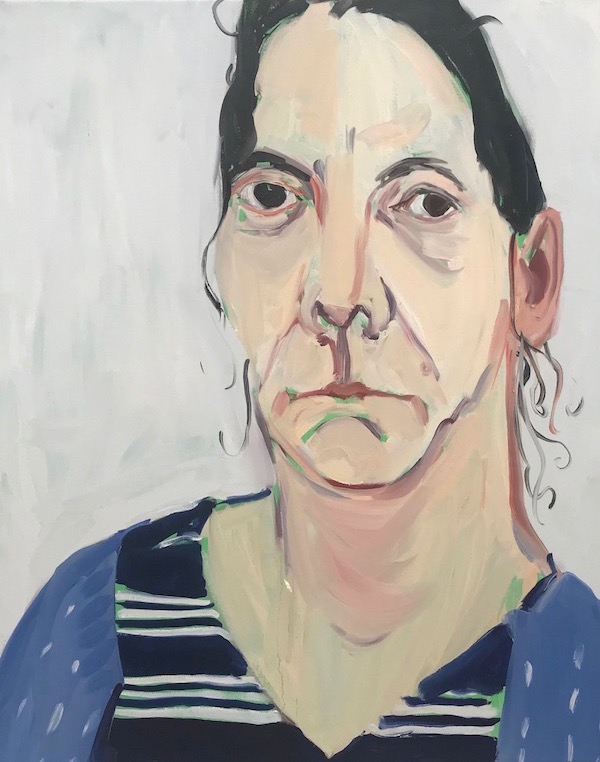 The artist Chantal Joffe takes this conundrum by the painterly horns in her two new Victoria Miro exhibitions, held across both galleries, in Mayfair and Islington. The Front of My Face in the West End presents a series of self-portraits in all their unflattering, existential angst. Looking at them reminded me of Martin Luther’s proclamation at the 1521 Diet of Worms: ‘Here I stand, I can do no other’. Whilst Luther was asserting his Christian faith, Joffe a 21st-century woman painter, asserts her right to be herself, someone who inhabits her unique presence, her own skin, not for another, least of all for a man. She is simply there. Being. Thinking. Feeling. Even for a male painter such as Freud, in his defiant Painter Working 1993, where he stands with his old man’s body, naked in a pair of unlaced boots, artist’s palette in hand, such candidness is rare.

Chantal Joffe documents her face and its changing moods. She lurks behind the sculptural slabs of paint, the eyes both sad and watchful, confrontational yet fearful. The mouth is downturned. The lips sealed as if in a refusal to give anything away. She appears to be collapsing under the weight of herself. Her flesh sags. There are deep grooves around her nose, imperfections and bags beneath her eyes. At times, as in Self-Portrait V January, she seems to transmogrify into a man. This is not some gender-bending exercise but a refusal to conform to perceived notions of prettiness and femininity. She presents us with uncensored versions of how she feels on any particular day: sad, wistful, fearful, anxious, ugly, defiant. Each of her paintings is a meditation of sorts, her face a barometer of fleeting and ever-changing moods. There’s also a defiant humour as she presents herself against the grain of the ubiquitous self-enhancing selfie that always attempts to show its subject in the most flattering light. There’s a refusal to glamorise, titillate or flatter. 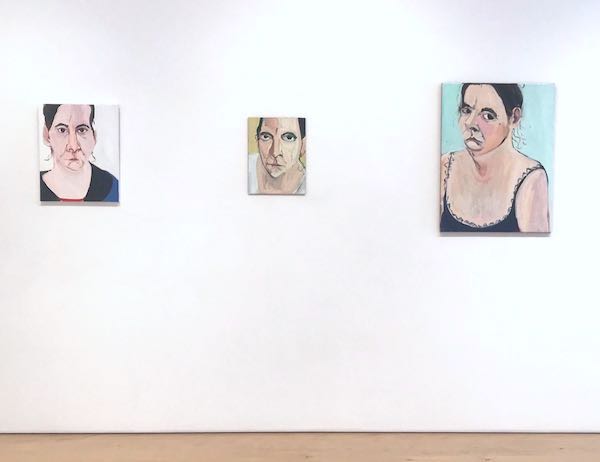 Having interviewed her in the past, I know that we share a common interest in the work of the early 20th-century German Expressionist artist, Paula Modersohn-Becker, about whom I wrote a novel. Modersohn-Becker, both in her self-portraits and depictions of peasants from the north German moors, sought truth over conventional beauty, psychological insight and empathy over aestheticism. Her influence on Chantal Joffe, who has many postcards of her paintings around her studio, has been considerable. As has the work of the American painter, Alice Neel, not only in the way Neel loosely applies paint but in how she empathises and identifies with her subject.

Over in Wharf Road, Joffe presents a series of large-scale paintings of teenagers that document their mixture of vulnerability and insouciant, ‘whatever’ cool. The gaze of these young women is not so uncompromising as those of the self-portraits. They glance sideways or look at the floor from beneath heavy-lidded almond eyes. In a full-length portrait of a girl (her daughter) in a white shirt and grey mini-skirt, her arms hang awkwardly by her sides as though she’d much prefer to be elsewhere. The large horizontal portrait with plaits, lying on a dark grey sofa, chunky legs exposed beneath a checked green mini-dress, presents her as part sexualised odalisque and part vulnerable bolshie teenager. It’s in the portrait on the beach, hands on hips, dressed in a checked skirt like the grid from a Modernist painting, carrying a black handbag and wearing a little round, rather 1950s hat, that we sense her defiance. Ironically, the most vulnerable portrait is the single painting of a young man. With his hairless baby-pink chest and brown nipples, he looks uncomfortably at the floor with a sidelong stare.

The subject of Joffe’s painting is always life, which she gives us warts, anxiety and all. She charts the process of living and ageing, tracing the difficulties, disappointments and small victories it throws up like a series of maps on the landscape of the faces she paints. Few do so with such disarming honesty.