I’m just back from the opening of Charles March photography show at Palazzo Borghese in Rome. His work, often on a very large scale, is well suited to the grandeur of Italian palace rooms. I write about it here because it answers some of the questions raised by Shape of Light, Tate Modern’s current show of abstract, or abstracted, photographic images. My own response to the Tate show was moderately enthusiastic – unlike, it must be said, that of some other commentators, who often gush more than I am prepared to do about current Tate enterprises.

I did note two problems. One was the question of scale. The Tate show covers quite a long period, and more most of that time, photographic images were, for technical reasons, on a dinky scale, while paintings could be pretty much any size you wanted them to be. Another was confusion about definitions. In covering recent technical developments in photography (an art form wedded to technology from its very beginnings), the Tate show veered away into things which had nothing to do with cameras or lenses, but which were entirely concerned with what could be produced on paper using light-sensitive chemicals.

This development was due to a desire to make what was still called photography into something entirely independent of the external, visible world. This impulse is understandable. It arises from a desire to give photography the same status as painting, much of which – the whole history of purely abstract Modernist art, starting with the likes of Malevich and Mondrian – has asserted its right to complete independence from anything observed. The paradox is that this impulse arose in the photographic world just as it was hitting the buffers in supposedly radical painting and sculpture. The Minimalist movement in art that flourished in the 1970s, desperately trying to escape from any possible link with figurative representation, was essentially a reaction to the vulgar success of Pop Art. It pretty much crashed and burned in the following decade, though some remnants of the impulse do indeed survive today. 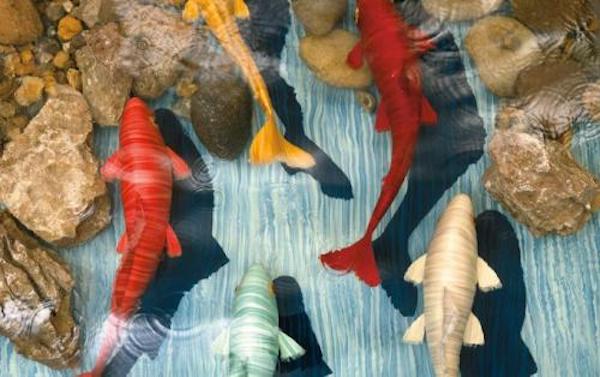 Charles March’s panoramic photographs of landscape, though it contained other things as well, formed the core of this impressive show, spaciously installed in big palace rooms. They took full advantage of developments in digital photography. No constraints here on physical size. What was even more interesting about them that they discarded other presuppositions as well. For example, that the camera needs to remain still, in order to produce a satisfactory image. Still photographs, as the designation suggests, are moments frozen in time. That was not the case here – the camera moves, rather like a painter’s brush, as the pictures are made.

As the sequence of images showed, March’s panoramas, since he embraced this counter-intuitive way of working, have grown more and more apparently ‘abstract’ as his experimentation with this techne have developed. What the photographs often resemble, though on a much larger scale, are JMW Turner’s late work, his self-styled ‘colour beginnings’. They plunge the viewer into direct experience of the natural world yet remain poetically unspecific.

What one has here are images of the photographer’s Goodwood Estate in Sussex, of the countryside around the tsarist palaces on the outskirts of St Petersburg under snow, of beaches in the Bahamas, and of other beach scenes on the Isle of Jura in the Inner Hebrides.

There is a progression in time. The images gradually grow more drastically abstract as one moves from earlier sequences to later ones. In certain cases, for example, a huge image of a beach at Eleuthera entitled simply with the date when it was made and the time – 2015.03.31 – 14.20.04 – one might, at first glance, read the result as entirely abstract, entirely detached from anything seen in nature. It consists essentially of four bands of colour – dark blue, green, white, and a pearly shade of grey. At a second glance, the eye detects subtleties: a still darker line in blue that marks the horizon, ripples in the white that tell one that one that one is looking at waves, breaking gently on a shore.

I think these big photographs tell one perhaps contradictory things. One is that radical Modernist Abstraction, of the Malevich variety, has in the course of the last hundred years, taught us to look in a new way. The other is that direct visual experience of the world is inextricably linked to the way we look at art, whether the artist wishes us to do so or not. For example, Malevich’s Black Square, painted in 1913, and now in the State Tretyakov Galley in Moscow, inevitable reads like a window in a very which wall, looking out at a night sky. The more so because the cracking of the black paint now suggests a tattered curtain of coarse netting, impeding our view.

As it happens the Tate Gallery offers on the Web a site entitled Five Ways to look at Malevich’s Black Square.

And the way of looking I’ve just offered isn’t one of them. Why not? It’s there, sure enough. Art lives through looking. Listening to the blah-blah isn’t enough. I think that’s what I took away from Charles March’s show.

Rome – 25 May to 30 June, Galleria del Cembalo in Palazzo Borghese will be hosting an exhibition with photographs by Charles March, Duke of Richmond, for the first time in Italy.