The new show at Charlie Smith London celebrates, as the handout tells you, “a full decade’s operations in Shoreditch”. Within that period, the gallery has presented 88 exhibitions and has participated in more than 30 art fairs in Germany, Italy, the Netherlands, Switzerland, the USA and here in the UK. Although the gallery has strong connections abroad and quite often shows the work of non-British artists, the large majority of those included in this celebratory show are British or live and work here. So the show can be regarded as a snapshot of what is happening in British art right now – much more accurate, in its own modest way, than anything offered recently by, for example, the Tates, and not shrouded in that aura of self-satisfaction which has increasingly become a Tate characteristic.

In many ways, the message at Charlie Smith is a cheerful one, and also in other ways, it isn’t

There are just over 30 works on view. Most of the participants are represented by a single work. Understandable, as this – two rooms above a pub – is not a big space. There is little sculpture. And many of the exhibits are small. One or two are very small – for example, a drawing by Paul Chiappe that measures 5 x 6.85 cm. Nicholas Hilliard come home – all is forgiven! 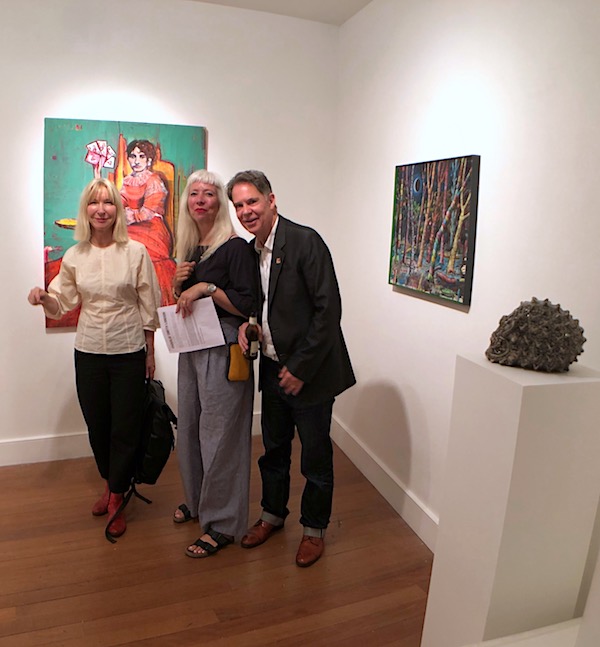 These are things you can buy, take away, find a place for in your house. The very opposite of most of what you’ll encounter at the huge Olafur Eliasson show that has just opened at Tate Modern, though if you look around, there are also some small-scale Eliasson products included in that. You can even purchase examples in the Tate Modern shop as you depart. On this other occasion, however, you are not being offered ‘art as an experience’, but art as a possible possession. That goes against the current of grandiose official exhibitions – supposedly drastically populist, but with those, the paradox is that you still have to pay to go in. At Charlie Smith’s 10-year celebration, you only pay if you like it enough to want to own it.

The work on view is good. Some items have a romantic quality. For example, I particularly liked Simon Keenleyside’s I was made to love magic, a night-time woodland scene with a crescent moon, very much in the tradition of Samuel Palmer. I also liked Adam Dix’s triptych Silent Servitude, which seemed to cross-reference the space-age with the work of Salvador Dali. There are two pictures by Hugh Mendes, who regularly exhibits at Charlie Smith London. One is an Obituary for Jan van Eyck. The other is an Obituary for James Ensor. These four examples are enough to demonstrate that this is an exhibition reverberating with savvy cultural references.

And here’s where one encounters a problem. At the moment British art, and most particularly perhaps the kind of art you hang on walls, isn’t going anywhere in particular. It’s chasing its own tail – going round and round. When is it going to be able to break out of its magic circle?