Chris Ofili’s big tapestry, commissioned by the Clothworkers’ Company and now on view at the Sunley Room at the National Gallery, doesn’t seem to have attracted nearly as much attention as it should have done. It’s a pretty spectacular object, and in addition to that, it ticks all sorts of boxes.

British-born, of Nigerian, origin, Ofili is a prominent member of the so-called YBA generation, a winner of the Turner Prize when that really meant much more than it does now. He has moved out of Britain and lives in Trinidad. If memory serves, he was the first artist of African origin to be represented in the NG. His work has appeared there previously, in a 2012 show called Metamorphosis: Titian shared with Conrad Shawcross and Mark Wallinger. I don’t think there have been any other African artists at the NG since then, till Ofili’s current re-appearance.

His big tapestry is not the product of machine weaving, as is the case with Grayson Perry’s ventures into the same field. It was already created by hand, with a specialist firm based in Scotland, and took three years to create. 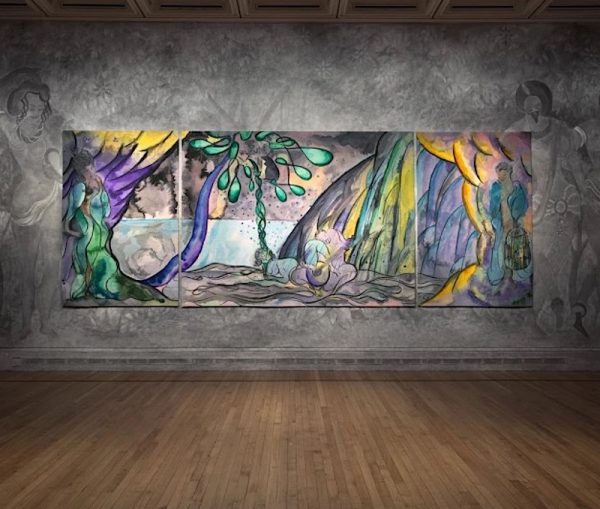 The show is handsomely presented. There are preliminary drawings. There is an explanatory video. The main space, in which the tapestry hangs, has been frescoed throughout in monochrome with huge figures of dancers.

The tapestry itself is entitled ‘The Caged Bird’s Song’ paying homage to the famous book by the African-American writer Maya Angelou, “I know why the caged bird sings” with the show itself is called Weaving Magic.

The idea that this is a sacred, magical event is reinforced by the fact that the tapestry itself is triptych – a format revived in our own time by none other than that confirmed-atheist-hankering-for-God Francis Bacon.

In this case, however, the atmosphere is a good deal less fraught. Ofili’s composition is a hymn to nature, and the great Modernist it tends to recall is Matisse (who, after all, decorated at least one church himself). It says a lot for Ofili that his tapestry stands up well to the comparison.

It belongs to what seems to be an increasing tendency. Now that people no longer go to church as much as they once did, museums, or parts of them, are being turned into sacred spaces, dedicated to no particular creed or denomination, but simply to unspecific upsurges of religious feeling. ‘Lord, I believe – help Thou mine unbelief.’ In this case, it works rather well.