World War 1, was one of the bloodiest wars in all history, with a total of 41 million dead. The UK suffered over a million deaths with nearly 2 million injured. With 6% of the population affected, almost every street in Britain knew blood, gore, grief and loss.

“Borland’s work is at first sight slight, reductive, and bleak but also full of a strange innocent comfort and love.”

Impossible to imagine, so how to create a quiet, thoughtful, gentle yet memorable comment on the war’s centenary? Christine BORLAND has done just that, at Mount Stuart on the beautiful Scottish island of Bute.

During WW1 this huge idiosyncratic Victorian Neo-Gothic mansion set in 300 glorious acres beside the water, was converted into a naval hospital. This commission, part of Mount Stuart’s now 17-year imaginative Contemporary Visual Arts Programme, highlights in subtle ways not just the impact of bombs and mines, but the day to day repercussions: lack of medicines, shortage of wound dressings, the terrible and common loss of limbs. 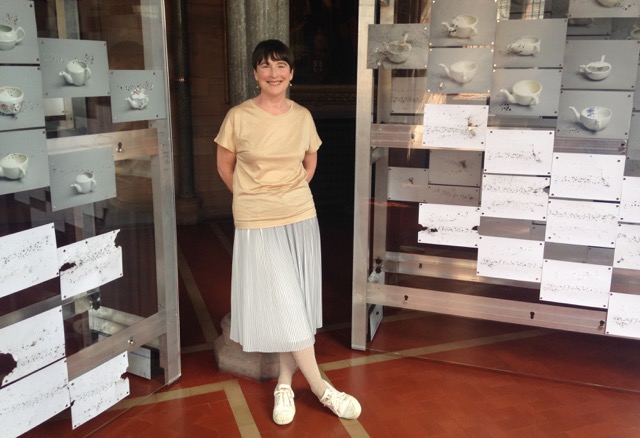 Borland has an academic side and researched extensively. “Every year, spring and autumn, farmers plough up war remains which they call ‘The Iron Harvest'”, she told me. “The Belgian Bomb Disposal Unit operates daily along the Western Front, in Belgium and France.”

In Borland’s moving retelling, 144 feeder-cups then used in the nursing of invalids, fragmented by the unit in a controlled explosion, are displayed across the vast Mount Stuart dining table under the gaze of family portraits by Reynolds, Ramsay, Raeburn and Gainsborough, a beautiful white sea of modest shattered misery under the gaze of male power.

A pink parachute hangs forlornly in the Conservatory. It is stuffed with dried sphagnum moss, used in 1914-18 as a substitute wound dressing & its shape and colour echo the shape of a moss fruit. Ironically, tragically, parachutes were not allowed in WW1, in case they encourage cowardice.

For any artist, Mount Stuart’s imposing Marble Hall with its stained glass windows and soaring 80 ft vaulted ceiling of star constellations, is a challenge, met here with aplomb. In WW1 it accommodated 50 beds. Borland has filled it with a ‘pool’ of 444 hand-blown glass globes surrounded by a pink hem cut from the parachute. Reflecting the warm pink glow from marble and zodiac stained glass, it shimmers and smiles, yet replicates a 1/12th scale crater, one of the biggest in Flanders. 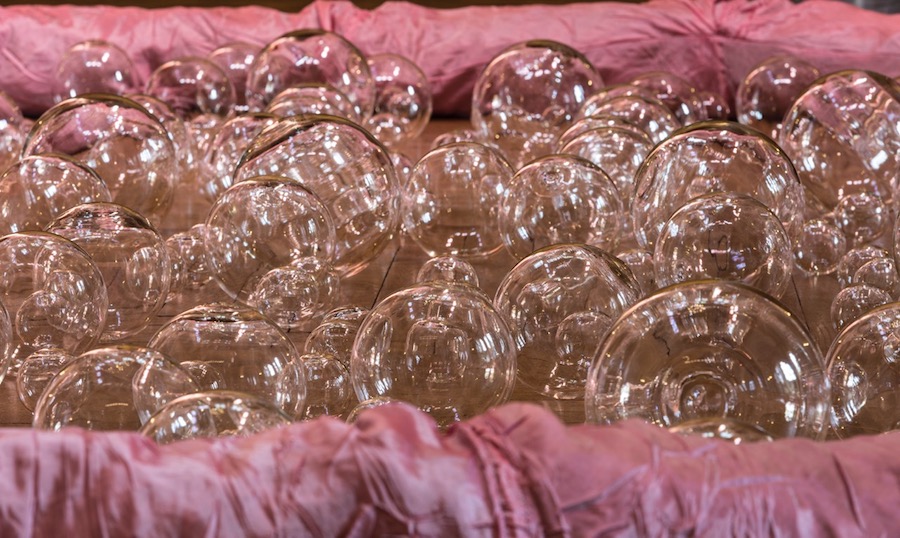 Astrology, zodiacal decoration and the number twelve recur throughout Mount Stuart and Borland has followed this lead in various ways, some perhaps confusing to the average visitor. Twelve “Floating Groins” in the indoor heated swimming pool (the world’s first) also the result of research in the house’s vast archives, make for intriguing structures which need further explanation.

However, two collages from a series of 12 prints, are plain enough. Developed from archival photographs, they show a nurse and surgeon operating at Mount Stuart together with a Glasgow statue of War, which lost its arm during a 1941 bombing raid. Borland has created 12 superb images where the limb endlessly changes form. They are a moving tribute to veterans everywhere.

Borland has long eschewed the melodramatic or sensational. Her passion for biology, anatomy, medicine, forensic science, began at school. MA study in Belfast 1988-89 during the worst years of the Troubles opened her eyes to the reality of war. Now a professor with an honorary degree, this Turner Prize nominee still researches deeply, then attacks modestly. Back in 1993, I wrote, “Borland’s work is at first sight slight, reductive, and bleak but also full of a strange innocent comfort and love.” This still applies today.

CHRISTINE BORLAND – To The Power of Twelve, Mount Stuart, Bute – until November 18th. Mount Stuart is open every day. www.mountstuart.com

Read More By This writer