The Cindy Sherman retrospective just opened at the National Portrait Gallery is a major blockbuster, illustrating all aspects of a very prolific career. It stands on much more solid foundations than the Michael Jackson exhibition recently on view at the same institution and ticks several boxes relevant to the current situation in the visual arts.

For example, while portraiture as an art form has declined, self-portraiture remains a big deal in contemporary art. Think of Tracey Emin, who nowadays seems to produce little else. Alternatively, think of Georg Baselitz’s versions, not only of his appearance but of self-portraits made by leading artists in the past. A recent show of these – it closed on March 29th- was held by Gagosian in New York.

There is also the fact that Sherman’s medium is not paint but photography. The NPG exhibition gives, perhaps without intending to do so, an excellent narrative of the way in which making images has risen to the prevailing situation in our culture that it now occupies. The first half of the show is a mass of dinky little black-and-whites, chief among them the Untitled Film Stills – a series that the then young artist began to make shortly after she moved to New York in 1977. These images, as the press release tells one, were already, even at that moment, retardataire: “With Sherman herself as a model, wearing a range of costumes and hairstyles, her black and white images captured the look of 1950s and 60s Hollywood, film noir, B movies and European art-house films.” Dear dead days! 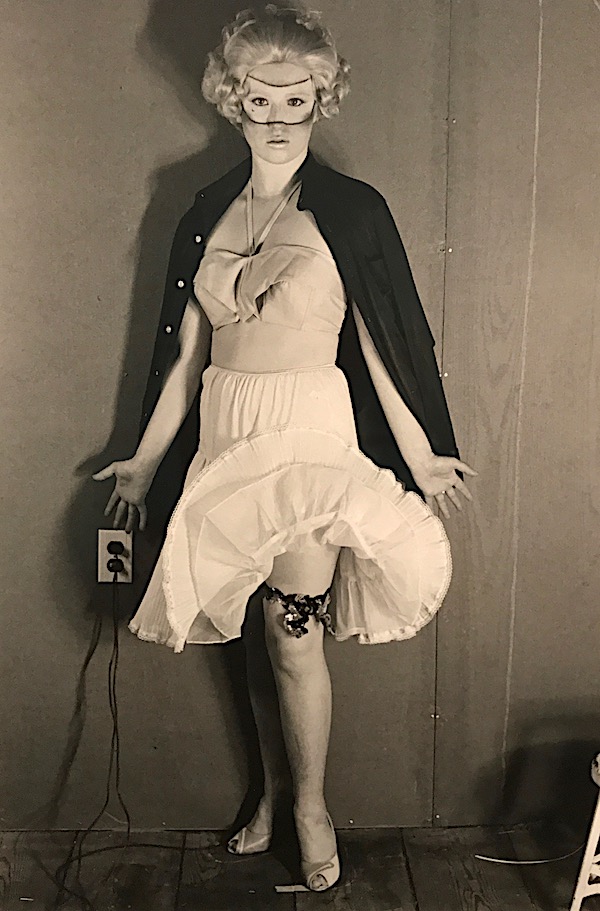 This fixation on the past has remained a feature of Sherman’s work. She looks at society portraits – formidable dowagers and also flappers from the 1920s. She has made a series paraphrasing Old Master paintings. She has looked at the covers of glossy magazines, more perhaps as these used to be rather than as they are right now. Her images, thanks to rapid advances in photographic technology, are now large and in colour. In most, but not quite all of them, some version of her likeness is present. To be fair, there are also a few homages to Surrealism, and some cautious sex pictures, in neither of which is she portrayed. Her photographic techniques have moved in step with advances in technology. A recent image, Untitled #577 – 2016/2018 – features no less than four different Cindy Shermans, clustered together. Impossible to do this convincingly without Photoshop – the image goes a long way beyond ‘cut-and-paste’.

Within certain limits, here is a formidably impressive show, which offers the visitor a great deal both to look at and also to think about. It resonates with commentaries on society and on the position of women within that society. The nearest parallel I can think of are the self-portraits made by Frida Kahlo, the bulk of whose paintings were images of herself. Sherman’s range of social and his historical reference is however much broader, and her engagement with both social and historical themes is more fully worked out.

There are, inevitably, moments when she fails. I doubt, for example, if any visitor to the exhibition is going to look closely at every one of the dinky black-and-whites presented in serried ranks in the first part of the show. One’s rebellious subconscious soon murmurs: “Thank you, my dear – I think you have entertained us sufficiently.” Her paraphrases of Old Master paintings seem feeble when confronted, as they are here, with a famous portrait by Ingres, borrowed from the National Gallery next door. The biggest problem is the view of modern society the exhibition presents. As the hand-out, I have quoted indicates, Sherman’s view of what this society is like was already somewhat nostalgic when she started her career in the 1970s with the Untitled Film Stills. From time to time thereafter, she masqueraded in her art as a male. Occasionally she even presents herself in full masculine clown makeup – Untitled #413 dated 2003 – at a time when personages of this kind seen historical rather than actual. For most of what is on view, she lives in a mono-cultural white female world. The glossy magazines she subverts are now a good deal more hip to what our current society is like that she herself seems to be.