The National Gallery’s splendid new show, Monet & Architecture, caps a very rich Spring 2018 season of exhibitions in London, arriving as it does hot on the heels of the Charles I show at the Royal Academy and the Picasso 1932 show at Tate Modern.

The only thing one can perhaps quarrel with is the title. While some splendid architectural masterpieces take a bow – Rouen Cathedral, Santa Maria della Salute in Venice – there are plenty of constructions here of little or no architectural distinction. For example, the Gare Saint-Lazare in Paris, and Charing Cross Bridge here in London, utilitarian constructions without much, or indeed any, panache.

“Monet’s images of Rouen, Paris, and London have become part of the visual landscapes of our imagination.” – Dr Gabriele Finaldi NG Director

Monet’s primary concerns are infinitely subtle variations in light and weather, and how these, from moment to moment, transform the landscapes, and in this case very largely the cityscapes, we look at.

One of the most interesting things about the show, at a time when social and political virtue-signalling have become primary subjects for art, is that, where themes of this kind are concerned, Monet is studiously neutral. It never seems to cross his mind that the two famous churches I have just named are religious buildings. Any elements of Christian iconography in the intricate Gothic façade of Rouen’s west front are subtly obliterated.

He is equally neutral about the effects of industry on 19th-century city life. Turner, in the famous Rain, Steam and Speed, which is in some respects a precursor of Monet’s series of paintings of the Houses of Parliament, does seem to tell us that the 19th century Industrial Revolution had an apocalyptic side. There is no hint of such an apocalypse here. The pollution that veils London’s Thameside buildings and bridges is, for Monet, a fascinating phenomenon, not least because it was something visually novel, something that invited an entirely new range of visual effects, of a kind unknown to the landscape painters of earlier centuries than his own. Yet his attitude towards these effects is sedulously neutral.

There is just one painting in the show that seems to have any kind of political message. It has a fairly elaborate title: The rue Montorgueil, Paris. Fête do 30 juin, 1878. It shows, from the kind of high viewpoint typical of Monet’s other cityscapes, a narrow Paris street which is a mass of waving tricolour flags, and, at ground level, a swarming crowd of minuscule human beings.

The festival held in 1878 celebrated the success of the Parisian Exposition of the same year which, in turn, celebrated France’s recovery from the humiliating defeat of the Franco-Prussian War of 1870-1. The event also served as a tactful substitute for the traditional commemoration of the 1789 Fall of the Bastille, held in France on 14th July from the time of the French Revolution onwards. This was something that the right-wing French government of the day wished to avoid. It’s a wonderful painting, but, in the context offered by the rest of the N.G.’s show, it sticks out like the proverbial sore thumb. 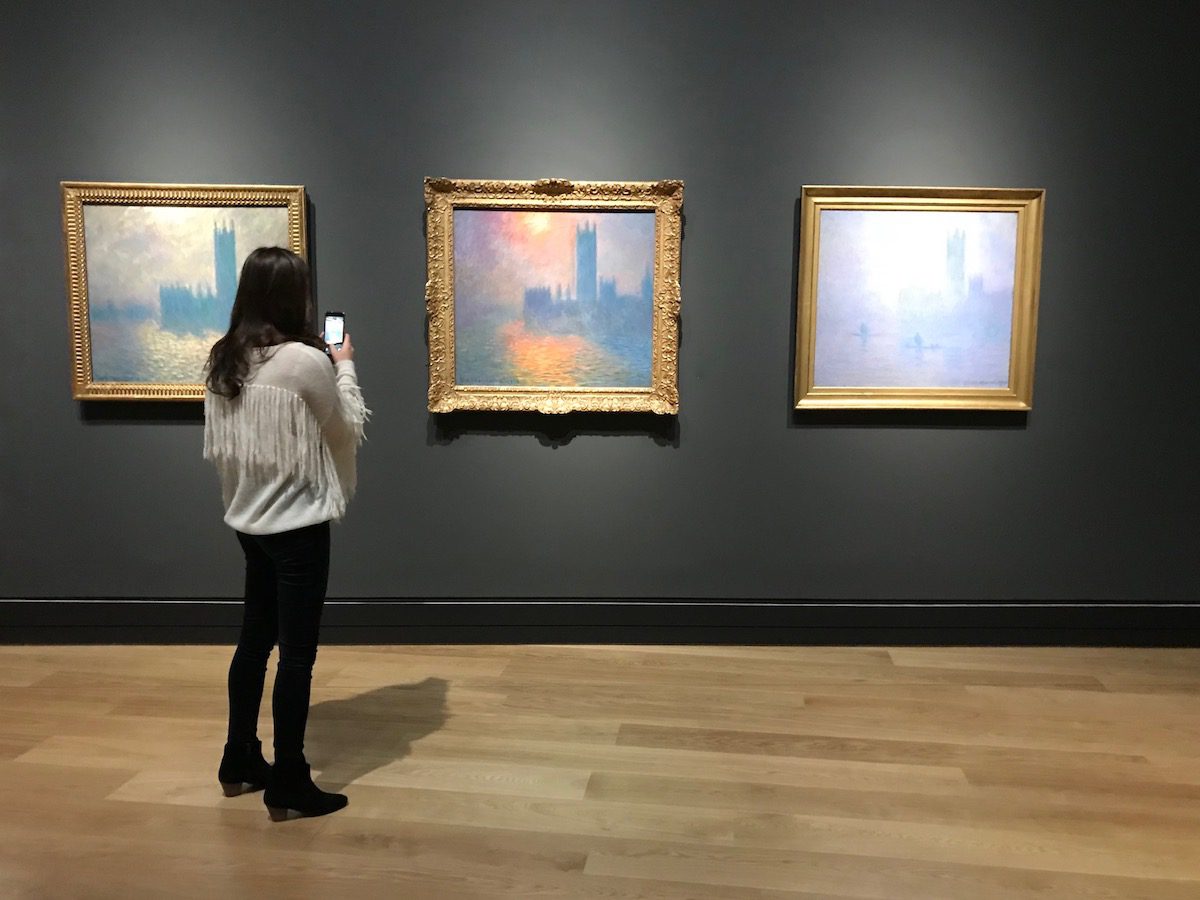 Monet, of course, was a revolutionary in his own right, but the revolution he wished to bring about was strictly a revolution in seeing. With the success of the Impressionist Movement, in which he was perhaps the most radically important participant, ways of looking at art changed. So did ways of looking at the surrounding physical world. Impressionism, however, also implied a rejection of the kind of stridently political art that had dominated French painting from J-L David to Gustave Courbet.

Without intending it, this exhibition carries, in today’s context, its own quasi-political message. How does it run? ‘Seeing is better than believing.’