Two London shows from big commercial galleries reflect different but related aspects of the current international scene. One, at Gagosian Grosvenor Hill, is for the internationally known American artist Cy Twombly. The other, at Pace, is for Song Dong, a Chinese artist now in his early 50s. For me, the Chinese artist is the more impressive of the two. At the pair of private views that I attended, both held on the same pouring wet London evening; there was a marked difference of bustle and enthusiasm. What I mean by this is that the Song Dong preview was jammed with people, a large proportion of whom seemed to be Song’s fellow-Chinese, while the Twombly event was not so well attended, and seemed to arouse its audience much less.

The main feature of the Song Dong show was a vast cityscape, constructed entirely of things to eat. This is apparently the latest in a series of installations that the artist has been making since the early 2000s. Similar works have been seen previously here in London, and also in Barcelona, Beijing, Hong Kong, Oxford and Shanghai.

What the artist has to say about them this is: “The purpose … is for the city I build to be destroyed … As cities in Asia grow, old buildings are knocked down and new ones built, almost every day … My city [is] tempting and delicious. When we are eating the city, we are using our desire to taste it, but at the same time we are demolishing the city and turning it into a ruin.” 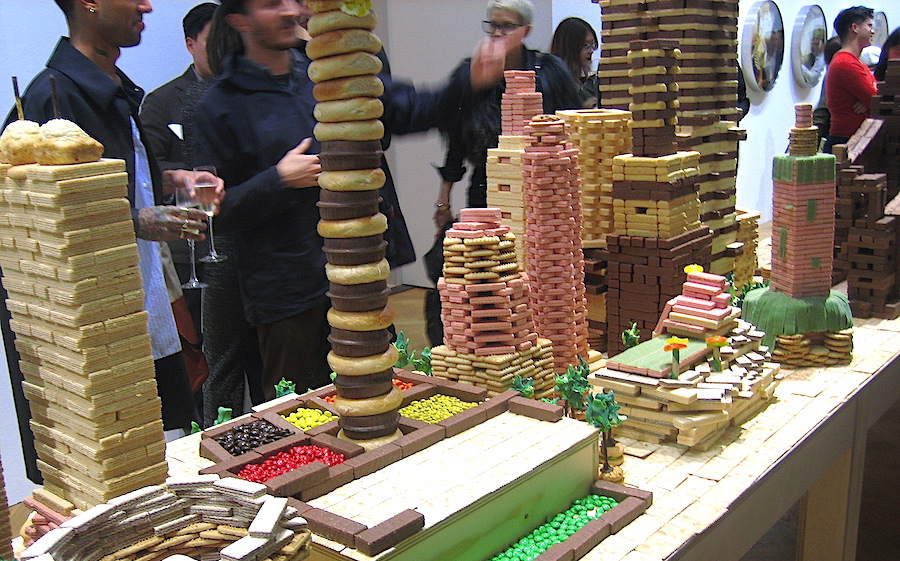 A great deal of today’s art is, in fact, ephemeral, both because of the material from which it is made and also because of the situations in which it is shown. In this case, the fragility is intentional, and part of the message. Other items in the show offer the same warnings about the fragility of the urban world in which we live, subject to continual processes of change.

Cy Twombly is no longer with us. An American artist, who belonged to the generation of Jasper Johns and Robert Rauschenberg, he died in Rome in 2011. Twombly had lived and worked there since 1957. He is perhaps better known for his large-scale paintings than he is for the sculptural objects now on view at the Gagosian Gallery just of Berkeley Square.

What struck me about this display of three-dimensional works was how much the energy seemed to have gone out of them, if indeed they had once offered any degree of this in the previous contexts within which Twombly’s work has been shown.

They didn’t seem like the offerings of an established contemporary master. Sometimes candidly figurative, as is the case, for example of a piece called Chariot of Triumph (1990-98), which looks like a toy cart, but more often seemingly hesitant between figuration and abstraction, these sculptures are mostly modest in scale, and nearly always pale in colour. Just occasionally colour asserts itself, as in the green and red piece called Turkish Delight (2000), which might indeed be two big lumps of the sweet in question. Had it been made of real Turkish Delight and not from ‘wood, plaster, acrylic and brass’, it would seem quite at home in the Song Dong show a few streets away.

In more ways than one, the Twombly show seems emblematic of the ephemeral nature of contemporary art. Song Dong embraces the ephemeral. He even goes so far as to lecture us about it. Dong piles up his bad-for-you-comestibles to create tottering cityscapes. Though nothing will remain of his constructions, very soon, except perhaps in the snapshots that he, his dealers, and we ourselves (in the era of the smartphone) choose to make of them, they linger in the mind. Like much current art, they aspire to being’ moral objects’. I don’t think one can credibly make such a claim for Twombly’s sculptures. They exist, blankly. You gaze at them, equally blank.