Daniel Richter has shaped painting in Germany as few others have done, since the 1990s.  He slots in well with important painters such as Peter Doig and Billy Childish but adds a twist of ‘Street’ savvy to the mix. Now his latest public gallery show at the Camden Arts Centre displays together paintings from the 1990s to the present.

Richter began his career as a graphic designer and later moved on to creating Punk record sleeve designs. With this in mind, you can understand much of his compositional language. His paintings often react to the political, social and media realities of today and serve as a starting point for his artistic work. Through the intersection of art historical, mass media and popular culture clichés, Richter creates idiosyncratic worlds and images of unstable realities. His later work seems to reference De Kooning and Rothko and to me is more successful than earlier works.

Peter Doig, on the other hand, derives much of his imagery in the same way as a film maker composes the frame. Doig is a much better painter than Richter. His imagery is far more sequential and refined although both deploy a certain crudeness that is endearing. 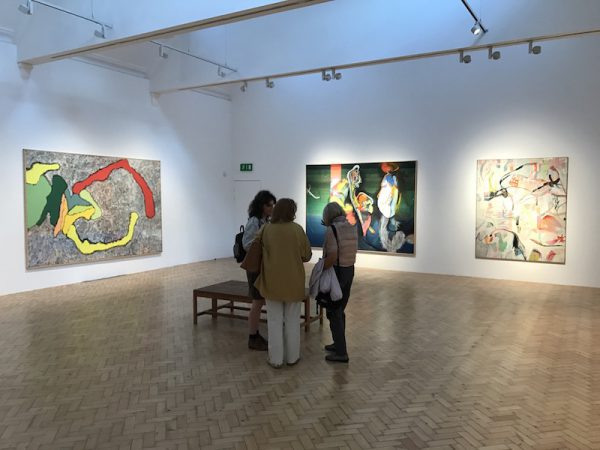 ‘Lonely Old Slogans’ traces Richter’s earliest, colour-intensive abstract improvisations through to his figurative works, described by the artist as a new form of history painting. Since 2000, he has painted narrative scenes filled with figures, often inspired by reproductions from newspapers or history books. These works convey the complex atmosphere of a moment, rather than depicting historical events or celebrating political utopias, foregrounding the contradictions and complexities of our times.