Lost+ Found is David LaChapelle’s first solo show in Venice. The exhibition expanding over four floors presents a survey of LaChapelle’s work from his early career till today.

Walking through the extensive exhibit the viewers are met with his iconic imagery of fantasy/ dream-like narratives adorned by magnificent explosions of colours such as in Once in the Garden, 2014.

“After the Deluge: Museum”, 2007, depicts breathtaking photographs of old masters paintings in museum settings submerged in water flooding, whilst in “After the Deluge- Cathedral” 2007, desperate worshipers drowning in flooded church lifting their hands to the broken window’s light still in hope of salvation. 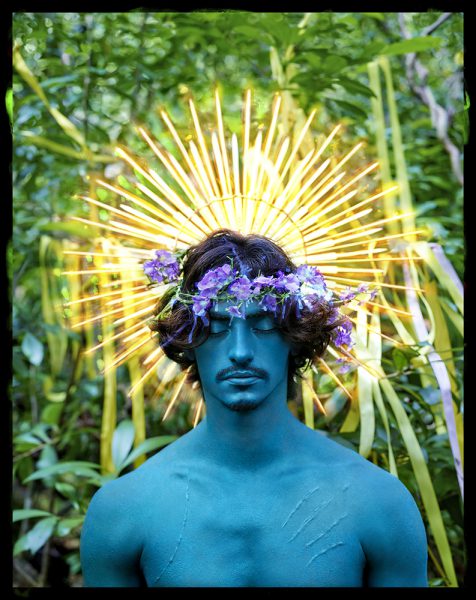 LaChapelle, as always, cleverly uses beauty and humour to attract the viewers whilst on second –deeper view- delivers the punch line with a reflective substance. However, LaChapelle is not a critic, he does not attempt to exempt himself standing on the side pointing fingers but rather joins in self-admittance for his own humanity and mortality, his sexual fantasies and modern indulgence and desire for the materialistic beauty and everlasting youth.

The reference to religion and religious iconography also threads nearly throughout all his work: “ Nativity” “Black Friday at the Mall- Apocalypse ” (presenting the Kardashians in a gold plated crumbling down shopping mall) and “ Jesus is my home boy”, 2003, are only a few examples of the LaChapelle’s fixation with god-and the loss (or shift) of faith. This might be influenced by his painful loss of many friends to HIV in New York in the 80s, and the stigmatisation of society at the time (and perhaps somewhat currently) of the LGBTQ community.

Contrary to some views, David LaChapelle’s work is anything but “poppy” or shallow, it is a reflection of society in its entirety – the good the bad and the ugly.