In 1983 David Mach burst upon the media stage with his London Southbank giant Polaris car tyre submarine installation. Installation was not a common thing back then. In fact, it was rare. Mach went on to make it his own with enormous but fiddly & detailed constructions, creating a perfect giant wave or swirl with 60 tons of newspaper, or even 165 tonnes of coloured magazines. His triumph was 1990 when he transformed Glasgow’s Tramway into a majestic, memorable Parthenon of pillars – and all with old Herald newspapers. Tramway has never ever looked better.

“I have a desire for extravagance, for epic” – David Mach

Since then he has proceeded to create sculptures with everything from match heads and wire coat hangers to pianos and full-size billiard tables, dalmatian to dishwashers, fire and ice. The newspapers lay idle. Now after a break of 25 years he’s at it again. “And I just love it!” Mach is at CASS Art, in the heart of Glasgow a few feet from GoMA Art Gallery.

This installation, Against the Tide, a mere five tones, is a comment on the abundance of information we receive daily and the questions this raises about our contemporary lives. Mach explains, “Here the newspapers are laid down and built in layers – one newspaper at a time. That process is quite extreme in its effort, but it affords a control of movement and form that is quite elegant and sexy. The newspapers need to be built with speed and precision, there’s no nailing or screwing or glueing, no fixing to slow the process down so the engineering, the applied mechanics of the piece, needs to be clever enough to hold the whole thing together as a permanently fixed work.” 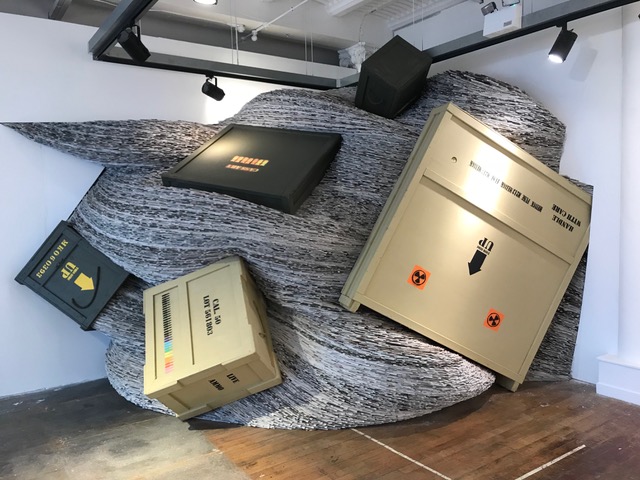 David Mach “Against The Tide”

“I want my art to involve work”, he says. “I’m suspicious when things become too easy. I have a desire for extravagance, for epic. I don’t want to be reasonable. I don’t want what I do to make sense, I don’t want to be conservative. I want to be exciting, annoying, irritating even and especially, I don’t want it to be easy.” He says the huge installations were a reaction to being nagged by galleries asking for small, convenient, saleable things that wouldn’t cause too much bother. “I wanted to do the exact opposite. I wanted mess and serious inconvenience. I wanted the effort of building, construction and engineering. I wanted, and still do that these installations take over the space they’re in with tsunami-like energy and speed, carrying all before them.”

Glasgow benefitted from the performance aspect, as visitors could go and watch the process, ask questions, speak to Mach. Mach has an easy open manner and likes to engage with his viewers.

My archive tells me I have written about him over 40 times covering his exploits and exhibitions from Warsaw to Paris, Bonn to Leith. I first saw his work and even took a photo of it, in 1982 in Dundee. Mach, a Dundee graduate, had just finished his Royal College postgrad and was showing in his home town. Then came massive installations involving trucks in Warsaw, flying pianos in Paris and Bonn, levitating washing machines and Venus on a stag, a two-seater plane for Cincinnati, 101 dalmatians at the Tate and in Sarajevo, a life-size train (185,000 bricks) in Darlington.

Thirty-six years later as he enters his 60s, his energy level has not slowed, his ideas are richer, his work load increased. “I have three careers now, he says. This, my band and my writing.” One feeds off the other, and one series of ideas breeds another.

He is currently in demand by cathedrals, making work for Chester, Salisbury, Southwark. “Sounds strange” he laughs. “But they even want installations along with heavy nail-encrusted, organic shaped driftwood. “I seem to choose the most labour-intensive fiddly, repetitive work, banging thousands of nails, weaving hundreds of silver coat hangers or scraps of comic, placing millions of magazines, just to create art. Crazy!”
But the results are gorgeous, impressive, unique, and created in Mach’s distinctive visual language, honed over many years. The ‘nail’ pieces have already appeared in Chester Cathedral, and the next, a huge tree trunk dragged from the ocean, shimmers like a sequinned Dior-McQueen gown. 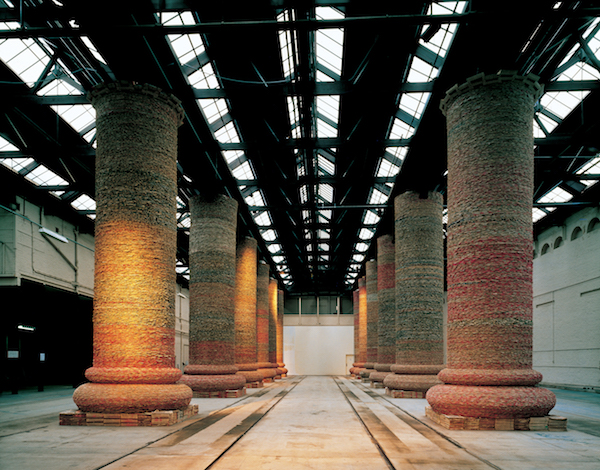 The CASS Art exhibition benefits from an array of small collages, the first time he has done this. Using tiny details cut from popular DC Thomson Commando Comics, books he and his brother Robert collected as kids in Fife, Mach has constructed a whole world of surreal events, weird stories, hilarious happenings and crazy adventures. These famous 7×5 inch books were launched in 1961 when Mach was five. Did he buy them with his pocket money I asked? “No NO! Robert & I entered all their competitions, and we usually won enough free copies to see us through the year! We used to cheat, reduce our ages! But you know the drawing in these comics was spectacularly good! ”

Mach has long made large complex, expensive award-winning collages. In comparison these 70+ tiny, intriguing monochromes at Cass are cheap. “Art for the people. And we even sold out at a show at Stowe! It takes a team months to create the big collages. I can do these at home.” Mach has been making these tiny intense collages for years but has never shown them as a series to stand on their own.

The themes come directly from the comics, which focused originally on World War 2, later the Falklands, Korea, Vietnam. The stories are stereotyped – about courage, cowardice, patriotism, dying for the sake of one’s country, noble actions, and enmity turned into friendship when the going gets tough. Commando Comics glorified Allied soldiers but also showed them as a mixture of good and evil. The scenarios were especially full of wonderful Bombs Away expletives: AAH!!. URGHHH!, AARGH! WHAARGH! EUGH! OUCH! OH NO! AW, NO! GOSH! EH? YOW! WHAT THE … !!!? ARGGGHHHH!

Attacking animals, tigers, wolfs, dogs, make up one series, another features “a shitload” of swear words swept into a corner or literally carted off on a rag and bone man’s dray. Boy meets Girl is classic Mach, while there are Cliffhangers of all sorts. A present for a friend’s golden anniversary made up of a collaged “Cloudburst of Material Possessions” led onto a shower of useful objects, then a rain of useless objects … the list goes on.

Mach’s daughter’s requests have also led him into exploring DC Thomson’s Bunty comics. These and the boyhood Commando comics plus magazines like the National Geographic have long fed Mach’s imagination and desire to use common images and themes in multiples of ordinary material. He says, “I like my audience to know what I’m up to. There’s a recognition factor I try to have in my work to that end so that people know something about it – whether they like it or not.”

This rebel artist whose band ’27 Zeros’ plays live across London and elsewhere, is of course also Professor of Sculpture at the Royal Academy. So we all await his new departure, writing, with anticipation. With his track record, It’s bound to be a hit.