So it falls to me to review “Death” so soon after the death of someone I knew. His name was Chris Jones, who died in a car accident on Sleaford Road, Metheringham, Lincolnshire, at 5.30pm Christmas Day, 2012. He was an incredibly nice man, 23 years old, with an enormous heart and a smile that lit up rooms. It seems there are three categories of death: death as a concept, our death and – by far the saddest – the death of other people. It is incredibly hard to believe his life is gone. As Joseph Brodsky said, “Death is always a song of innocence, never of experience.”

The very first part of this exhibition hints at what Brodsky said, wholly by accident, before you even get in the door. The first piece in this exhibition is a sign that says “Photography is not permitted in ‘Death’,” erected with the lordly purpose of protecting copyright. But this is what it is all about really. No one has been able to tell us what it was like (the moment), or is like (the continuing state). ‘Eternal rest cancels analysis’; it can only be looked at by those that haven’t experienced it, and this phenomenon is examined by the Wellcome Collection.

This exhibition is drawn from the collection of one Richard Harris, a former antique print dealer based in Chicago. It forms a ’modern-day cabinet of curiosities and an extended visual essay on our dealings with death across cultures and spiritual traditions. It functions as an autobiography of one individual and his collection but provides a remarkable opportunity to explore and interrogate our own feelings about mortality.’

This is the first interesting thing about ‘Death’. ‘Death’ is not about the afterlife: the Wellcome Collection puts on exhibitions of anthropology, not art – which is usually more concerned about relations with the everlasting as opposed to death per se. Christ doesn’t feature, heaven, hell, nirvana, saints, Valhalla are all absent. We have an exhibition of human responses to the idea of ending rather than what happens in the epilogue. ‘Death’ is not so much an encyclopaedia as a history of death.

The first room is a good introduction but in some ways a false start, dealing, as it does, with death in the role of “end of an individual person’s time”, and accompanying memento mori. Death has changed through the ages but for a long time its role was to be a kind of looming threat (and therefore usually taken as a kind of weapon of morality). ‘You are mortal, you are earth, and into the earth you shall go’, as Saint Prosper of Aquitaine is quoted as saying, which is teamed in the Wellcome Collection by Adriaen van Utrecht’s ‘Vanitas Still Life with a Bouguet and a Skull’ (1643) hold up death as a warning against arrogance and vanity that perhaps doesn’t hit home now; counterbalanced by Andy Warhol editions from Parkett Magazine no. 12 (1987), three months after his death, about which Glenn O’Brien Parkett has said, ridiculously:

‘Andy was what sports fans call a most valuable player. His work is more valuable now, but not because of some laws of marketing, but because he’s not around himself. Those works are souvenirs and relics. They’re pieces of Andy.’

Which is a very contradictory thing to say. Warhol’s death has led to the paucity of the Warhol commodity, cutting off supply and thus driving up value. The Free Market is set against the ‘Vanitas’ tradition. There is more than one way of “contemplating death”. Although, having said that, they all seem to centre around skulls, which would make for quite a boring art exhibition but anthropologically is an interesting observation in itself.

But this is does become something of a problem with ‘Death’ – there isn’t enough speculation. Room 2 looks at the Danse Macabre, whose heyday coincided with that of various pandemics of bubonic plague. The Dance of Death is an incredibly odd thing, seemingly ubiquitous as a theme, and seemingly inexplicable. Death kisses, hugs, embraces, scythes – all these are explicable through their being metaphors. But dancing? Why did people suddenly feel like they were dancing with death? Why does a disease-induced rise in death rate equal a dance with it? It does – the work is there – but why? Or is it that death dances around during an epidemic? More accessible is ‘Calavera’ (2011) by the Argentine Mondongo Collective, which takes the form of a huge skull, formed by a cascade of influence down from the Western World (placed at the brow) to poverty-stricken shanty towns (which make up the jaw); or ‘Death Chasing the Flock of Mortals’ (1896) by James Ensor.

Because the show’s real success is not really in showing how we remember death, but making us, as viewers of the exhibition, realise how much we forget about it or are wrong about it. The Danse Macabre and the momento mori illustrate how death is always close. Although, actually it isn’t – modern medicine pushes it very far away from our day to day lives, partly through hiding it and partly through preventing it. Maybe this is why the Danse Macabre looks so odd.

But as one would expect with the Wellcome Collection (as with, perhaps, any exhibition about death), the interaction of medicine and death comes in for considered treatment. At University, any student could technically go to any lecture apart from Anatomy. A photograph entitled ‘When shall we meet again?’ – featuring six c. 1900 medical students with a cadaver and titled after a line spoken by the witches in Macbeth – is a hint why. This hint is picked up on in a less subtle way by John Isaac’s sculpture ‘Are you still mad at me’ (2001), a carved out body of what we presume (from the picture on the front of the crate the body sits on) is a little girl who has apparently been dissected. Any doctor you have ever known has learnt their trade by at least watching, if not doing, the cutting up of a corpse for the purposes of poking around. Doctors learn to prolong life by studying the dead. Human dissection remains a secret, almost arcane, practice. 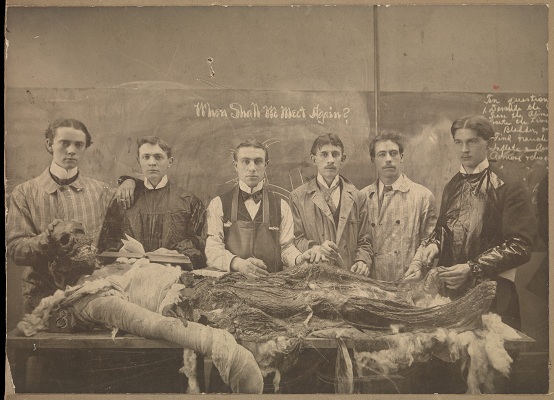 Along with this is a very useful implication, however, about the role of medicine. It seems that the view commonly held is that medicine prevents death, and the end goal of medicine is to actually cure death, in the same way that theoretical physics will “end” when it has found and proved the workable “Theory of Everything”. Lucas Franchoys the Younger’s ‘Portrait of a Doctor Lucas’ (1650) (who holds a skull), as well as the presence of a cadaver in “When shall we meet again?”, counteracts this assumption. Medicine saves life, it doesn’t prevent death – a misunderstanding that causes real problems for doctors who potentially face over-zealous claims for clinical negligence.

The exhibition’s success is in presenting death as corporeal, in a society where we assume it to be a more visual spectacle. Goya’s ‘The Disasters of War’ (1810-20) and Otto Dix’s ‘The War’ (1924) show what actually happens in violent death, which is crucial to this. Although television shows and movies depict violent death all the time, they depict an incredibly sanitised version of it, which then becomes what people expect violent death to be in the real world. Most warfare for most soldiers does not follow a heroic narrative arc, and being maimed in any way involves more blood. Goya’s are particularly strong in this regard: ‘A heroic feat! With dead men!’ shows unnamed heroes decapitated and strung on a tree; ‘They do not arrive in time’ is a simple visual statement against the assumed outcome of action films: ‘they arrive just in time.’ Three figures hold the body of a fourth. Otto Dix makes a series of powerful laments at the First World War, the most striking being the namelessness and unidentifiablility of some of its victims. The invention of gunpowder was also the invention of unintentional disfigurement of enemies – the unidentifiable corpse as a by-product of the weapons used rather than intentional defiling – leading eventually to the great legacy of World War I: the Unknown Soldier. This is in great counterpoint to the momento mori or the vanitas picture. Goya and Dix put forward a counter to the phrase ‘sweet release of death.’ Is death a release or a confiscation? 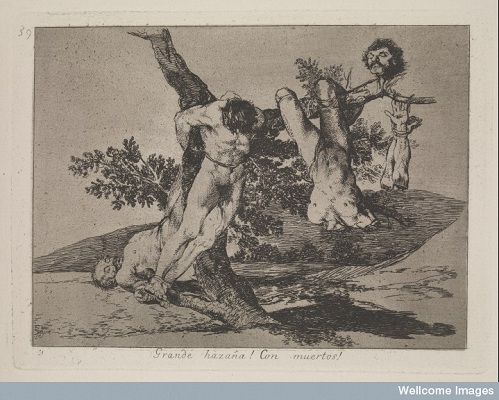 We all have the capacity to be dead and this is the least and most that ‘Death: A Self-Portrait’ could say. No one knows: there is no photography. The nearest we get to it is the object I will always remember from this exhibition. It is Kiki Smith’s ‘Vis Con Sili Expers Moli Ruit Sua’, a cast of her own skull (she is still alive and well) in bronze. Each human being carries a symbol of death, their death, inside their own head. As stupid as it sounds, I never thought of myself as having a skull before, not in the same way a skeleton has a skull anyway. Death is closer to Kiki Smith, me, and you than we commonly think. ‘Scythe, skull, and skeleton – an absurd pack of lies. Rather: “Death, when it comes, will have your own two eyes.”’ It found Chris Jones on the 25th December, 2012. Rest In Peace.