Dia Al Azzawi is in every way shape or form a painter’s painter. His application and layering of colour can be rich and sublime like Matisse or Leger but also his use of monochromatic elements resembling newspaper clippings are a most powerful vehicle for getting his imagery to act as a mouthpiece for his politically charged subject matter.

Al Azzawi  is a great communicator who works in the tradition of painters like Diego Rivera capable of creating vast mural-sized works which prompt the viewer to immerse themselves in his socio-political viewpoints. One can only draw comparisons to Picasso’s Guernica, perhaps the greatest modern depiction of the horrors of war. Society seems to have been desensitised by daily television news reports of the struggles and atrocities committed in the middle-east and perhaps we now need to hark back to non-digital forms of media like painting in order to reflect on this most recent and troubled history.

The vast body of work which includes painting, sculpture, relief, printmaking and even a carousel represented in this major retrospective exhibition is simultaneously displayed at Mathaf: Arab Museum of Modern Art and QM Gallery Al Riwaq in Doha. The exhibition is thoughtfully curated by Catherine David, a French art historian/curator, currently deputy director of the National Museum of Modern Art (Musée National d’Art Moderne) at the Centre Georges Pompidou. The work displayed at the Mathaf is of a smaller scale with the larger works in the cavernous Qatar Museums Gallery Al Riwaq.The two shows which run concurrently delivers a complete picture of the artist’s growth as a painter and sculptor rooted in regional traditions.

Al Azzawi describes his practice as not just political but as humanitarian.

Al Azzawi was born in Bagdad Iraq 1939 he studied archaeology and still possesses a love of objects which are apparent in many of his works. His figurative works are original and quite often Expressionistic by nature utilising black outlines in this tradition. Earlier pieces are quite intimate in size and depict themes of everyday life in pre-Saddam Hussain’s Iraq along with themes taken from literature and poetry. The work shifts considerably in 1976 when Al Azzawi moved to London.

Al Azzawi describes his practice as not just political but as humanitarian. In many of his most important works like ‘Sabra and Shatila Massacre’, 1982-83 (now in the permanent collection of Tate), he explains that by working from imagination, he delineates the scenes of chaos and horror in a semi-abstract style to create a work that is not a propaganda piece, but which documents a tragedy. It is prophetic that I tour his exhibition with him on the day that the operation to retake the Iraqi city of Mosul from so-called Islamic State militants is progressing faster than planned. It shows in Dia’s eyes but it is too painful to discuss and I leave it.

The current exhibition displays over 400 works and is the largest ever solo exhibition by any Arab artist. Entitled I am the cry, who will give voice to me?  Dia Al-Azzawi: A Retrospective (from 1963 until tomorrow). This thought-provoking artist is difficult to contextualise outside of other artists in his group of contemporaries. I wandered upstairs in the Mathaf Museum in order to try and piece together a working progression of art in Iraq before Mr. Al Azzawi left the creative community in the region. Much to my surprise, there were other artists of note such as Jewad Selim, Ismail Fattah and Kadhem Hayder exploring subject matter and an original style which can only be described as the ‘Bagdad School’. Dia Explained that life in this creative/intellectual community in Iraq was very much evident in the 1960s and like the rest of the world new boundaries were being challenged.

Forty years on and Al Azzawi is by no means a household name in Europe. His work is widely sought after in the middle-east, represented by galleries in Dubai and Paris. This week his painting Arsak Mowt (Your Wedding is Death) realised USD 235,500 at Christie’s Dubai. This is bound to be a game changer in terms of a market for this exceptional artist, who has yet to secure a London dealer. I predict this is all about to change with talk of a major London museum exhibition. 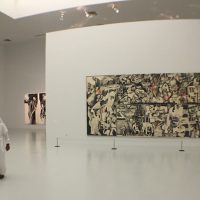 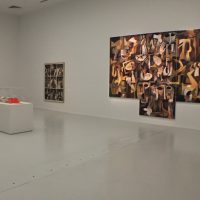 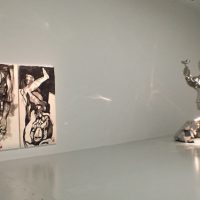 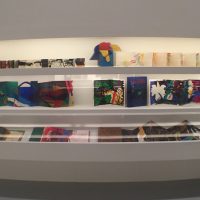 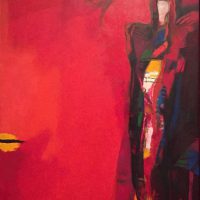 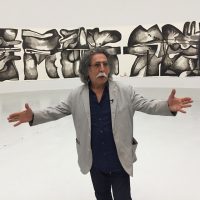 The exhibition “I am the cry, who will give voice to me?  Dia Al-Azzawi: A Retrospective (from 1963 until tomorrow)” Is on display until 16 April 2017  Mathaf: Arab Museum of Modern Art and QM Gallery Al Riwaq in Doha Qatar