A major retrospective of the war photographer Don McCullin at Tate Britain showcases his images from Vietnam, Northern Ireland and more recently Syria alongside pictures of poverty in the East End and working-class life in northern England.

There’s also meditative landscapes, particularly of the wet flat beauty of the flooded plains of Somerset. It’s a good morning to be aware of the quality of light for photography. There’s a bright wintry light on the Thames as winter turns to spring. People are gathering on the steps in the sunshine by the river, waiting for the doors to open.

The last time I saw Don McCullin’s work in a gallery context was at the Barbican in the late 1990s. Hence my witness of his work is a return visit. That was before I became an archivist for Reuters television before I went to study-work at the Imperial War Museum on a placement working on a significant conference on the Holocaust before I chose to spend time writing about and working with international news footage. 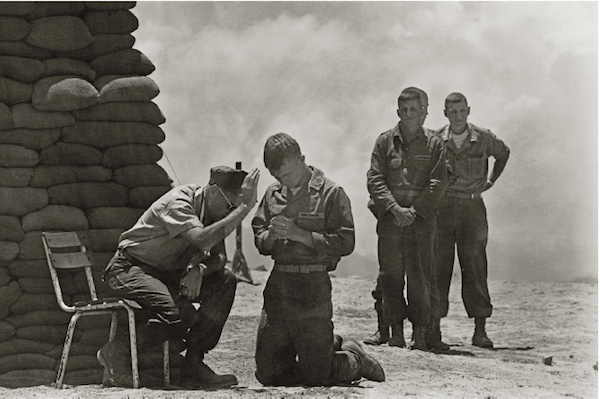 On a hill in Da Nang, Vietnam, a priest hears soldiers’ confessions, 1969

On this return visit, my eyes have changed. I have spent ten years daily cataloguing international news footage and recognise many of the tropes that McCullin works with, and have an internal catalogue of photographic notes of war which I refer to each photograph. The exhibition no longer awes me, as this has been the arena of my daily job. His presented personality as an action hero, ready with his camera, a hunter of conflict and human anguish is more familiar and more heart-breaking. At Reuters many camera reporters were embedded in the conflicts they were reporting. Like Fadel Shanaa, who was shot and killed with flechettes while recording an Israeli tank across the valley. He was just twenty-four years old and his footage of that final day when he died alongside eight bystanders (aged 12-20) is part of the archive and burned into my memory. I see it, and hear the screaming, in the back of my mind as I walk around the exhibition. Don McCullin’s reporter personality now is referenced alongside these urgent personalities that I worked alongside, from the safety of my bunker of film and tape and computers beneath central London.

As a picture maker, it is easy to recognise the artistry of Don McCullin’s choices as a picture taker. Composition for examples. There are many dramatic X shapes. There is complex and narrative use of planes, famously as in the corner shots of the confrontations between Irish Catholic teenagers and British soldiers where the two groups are on either side of a house, close, so close, but unable to see each other. Catholic youths attacking British soldiers in the Bogside of Londonderry (1971). These action shots are very graphic. And McCullin’s portraits too are so strong. The homeless man who stares into his lens has the wildness of Fuseli’s paintings of the players in Macbeth, the dirt on his face emphasising his grimace. McCullin’s theatrical narrative is strong.

But my soft spot is for anything humorous which breaks through. As in Boys in the book of Ibn al-Mustawfi, Arbil, Kurdistan (1991). The contrast in scale between these enthusiastic, adventurous youngsters and the serious import of the religious status, with these alive beacons of humanity sitting irreverently on the monument of this learned figure of the past is hilarious, hopeful, and to me, more effective in this juxtaposition than any statue could be along. Don McCullin, like other reporters’ footage I have seen for Reuters (and Fadel’s footage was very artistic with his choice of colours, his cinematographer’s eye) displays his expertise when noticing figures in an unusual setting. This happens time again in his photographs of the Lebanese civil war, and other photos of the civil war. Great, opulent hotels taken over by gunmen. Shattered, pockmarked wallpapered walls. As in the image of one gunman crouching with his weapon beneath the chandelier.

Like many professionals, Don McCullin is able to pull out the personality of a landscape even without a figurative component. Perhaps they’re waiting to be peopled by priests, warriors, families, officials, wanderers, artists, poets, the lost, the found. They are pregnant with the absence of human forces. I notice this as I move round to his pictures of the remains of older civilisations, buildings and temples thrust down by time if not by war (and probably brought low by both). In Europe and beyond we look at the incredible structures of the Roman empire, the pillars and walls as if they were not built by humans. Plenty of poems and writings testify to their past glory and how this makes us feel. McCullin’s angle on these buildings are very recognisable as part of this trope, but knowing his personal history as a photographer of war, of people in crisis, gives them extra power. McCullin’s trajectory is key to the level of emotion that I feel when I see his landscapes. It influences my response to them, but they are strong even without that provenance.

The curator’s note to accompany McCullin’s later landscape pieces says that he has now ‘ “sentenced himself to peace” ‘ but that the memories of conflict are clearly never far away. The note draws parallels between his pastoral pictures of Europe and the wars he has witnessed. I think of John Piper who could rarely draw a building without a dramatic stormy sky. I don’t think it’s necessarily personal memories of war that draw the jagged, portentous drama out of an environment. They lean on a classic gothic interpretation of the land. I think of the blasted trees of Cozens and Turner’s tumbling seascapes, hung only a couple of rooms away. This is the legacy of the countryside of Europe, of Britain, living with the ruins of former empires that seem to eclipse the present in terms of grandeur and achievement, and living with the shape of the land formed by pagan barrows, stones and holy trees.
I don’t recall the pictures of the Somerset Levels in my first encounter with his pictures back in the Barbican. I presume they hadn’t been taken at that point. I like the light. The washes of water. And the simple childlike title, Flood levels near my home in Somerset, 2016. We are all going back to the land.