Dorothea Tanning is the artist, face hidden to me back then, who drew and painted a short series of paintings that I have loved since a child. She created these as a young artist. Those Alice-in-Wonderland images that accompany books on surrealism, particularly the scene with the sunflower spreading itself languidly, organically over the stairs. In the gallery young girl, maybe twelve stands in front of Eine Kleine Nachtmusik (1943) with her mother who talks over the picture with her. She is engrossed. I remember my own fascination with this world of dreams, doors, stairs, melting into the walls and the domestic interiors, the strange way the girls are half undressed in their Victorian petticoats.

We know Tanning as a surrealist, but in the world of storytelling, children’s literature and illustration dream pictures predate the formal art movement.

These images, so beautifully painted in fluid oils, the brushstrokes hidden, the lines clear despite the nonsensicality of the scene, imprinted themselves on my mind like an Arthur Rackham illustration or the fairytale jewelled casket plates of Edmund Dulac. Surely these illustrators had a significant influence on this green woman age of Tanning’s work which has become the most popular, the most reproduced and the most loved of all her pieces with the general public. 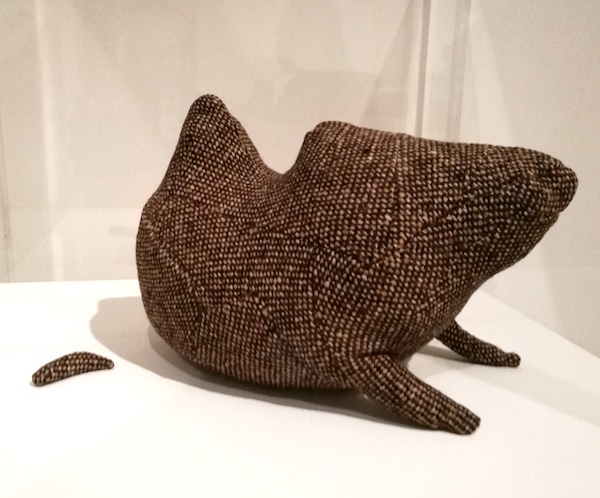 With this exhibition, the artist behind this small body of exquisite oils and illustrations is pulled from the shadows, where she has been lurking like a director in the wings, and revealed as a character to the world. It has been common knowledge that she was the partner of Max Ernst, that they were a modern art couple, one of the great pairings of outsider, counter-cultural dreamers that paddled their boat down a stream separate from the commercial flowering of twentieth-century culture. But with this large retrospective, we are shown the different ages of Tanning, a lifetime artist who lived till over a hundred.

When I see the photographs of Tanning as a child I see that she was one of a family of girls, and then I realise that her image Palaestra (1949) which gave me the impression of the communal imagination of boarding school must have been representing the dreaming and sleeping and togetherness of her own early family life, one of many siblings. There are more paintings that interrogate the dreams behind family life, the strange ideas that we have on waking about who we are and how our day selves relate to those selves we saw in the mirror of sleep during the night.

We know Tanning as a surrealist, but in the world of storytelling, children’s literature and illustration dream pictures predate the formal art movement. Beyond this generation of male influencers Tanning’s early work reaches back into her grandmother’s closets to try on frocks and archetypes in pictures like Children’s Games (1942), Magic Flower Game (1941) and the later The Guest Room (1950-52). Sneaky agitators and tormented princesses were packed in suitcases and brought from the forests of northern Europe (Tanning’s family were Swedish immigrants) and tucked under the beds in Illinois. This is the bunch of twisting identities that Neil Gaiman still peddles and that L. Frank Baum drew on when creating the magical otherworld of Oz that seeped into the heart of American popular culture. I occasionally jolt at the disconnect in histories artistic streams. As a film historian and archivist, many parallels jump to mind, so many people’s favourite dance classic, Powell and Pressburger’s The Red Shoes (1948).

There are more rooms to see, and I enter later periods of Tanning’s life. The paintings continue on their self-analytical, observational, memory tropes, beautiful, special, symbolic, recognising those moments where worlds meet. A restaurant experience suggests such a feeling. She sits at a table, her feet in water among the fishes, a painting of water hung on the wall. On her plate, a blue trout bends its back in the agony and ecstasy of death. The relationship is made between desire and surrender, unspoken but perhaps shouted in an inarticulate cry. 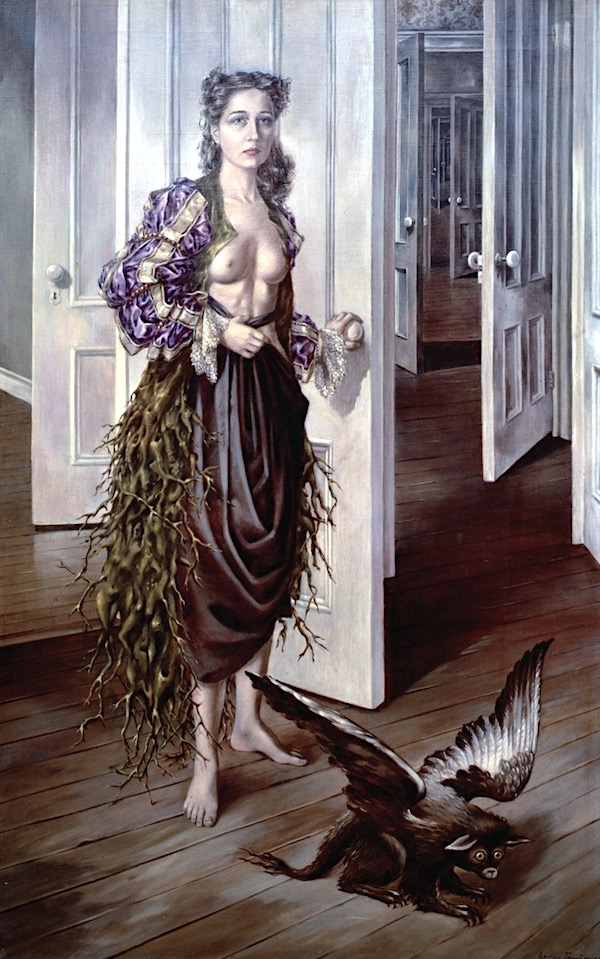 For there is sound and movement everywhere in these silent works. It gathers pace and becomes more abstract as clouds engulf the narrative, and body limbs begin to tumble. The dance seems to be removing itself from the trappings of props and scene, the bodies shedding themselves not only of clothes but of the standard identity of two arms two legs ahead. They are dissolving. This work of larger more abstract pieces seems to have continued apace for some time. I don’t I note I have never seen reproductions of these pieces before, not that I remember, and good as they are, well painted as they are, they dissolve in my mind, and I do not want to see them again.
But at some point Tanning took against the turps with fierce rage. She shouted against its physical domination of her studio, ‘I have had enough of you!’ or words to that effect. She records this as an important moment in her autobiographical comments for the short film in the exhibition’s final room made in 1970. She had had enough of its smell, of the pigments, of the aggressive solvents.

Which is when she took to her crazy sewing machine and began to sew like a demon, like she is both Rumpelstiltskin and Rapunzel fused into a bundle of energy working through the night, sewing the fraying material of tweed and the gorgeous thick fabrics as if she is making dresses for her siblings. And she begins to create soft sculpture that appears to have oozed out of her abstract period. As a dog lover who spends a long time with my own Bedlington terrier, I identify with her love for her Pekingese whose bug eyes stare at you from so much of her work in one form or another. And in a joke object, she has created a small abstract sculpture of her loved animal. With a stuffed bone he is locked inside a museum case and would be staring at us if his eyes weren’t dissolved into cloth, creating a needlework talismanic mascot, little Tweedy (1973).

And round the corner, we step into a darker space, the boudoir of Hôtel du Pavot, Chambre 202 (Poppy Hotel, Room 202)(1970-1973). Tanning grew up hearing the suicide ballad of Kitty Kane a Chicago gangster’s wife who poisoned herself in room 202. She relives her childhood imagination of that scary tale, the nightmare of the female dissolving into the wallpaper, the piano, the fireplace, the armchair, merging into the adult’s opium-induced nightmare. Again there is a physical ecstasy of the loss of self at the moment of death, most clearly expressed in the loose, contorted figure throwing itself backwards onto the table in a pose of abandonment. This echoes her images of a woman playing the piano, her neck tilted back in Romantic orgasm in musical climax. I don’t find out if Tanning plays herself but this interest in music and the body creating to music heard and unheard is everywhere. In the excitement of sensory deprivation, the thrill of poverty chic, a lone bare lightbulb hangs, it’s poor light fading around the blood coloured wallpaper and dark red patterned rug.

This exhibition has shown me the face of Tanning. She stands in front of her easel in her European peasant style, smiling, holding her brushes, showing herself happy to create, impish. She is Gretel. She’s also the witch. She’s the subject of her own paintings, beautiful and young full of the force of nature and ready to die like the rejected Kitty Kane. With the power of turps and the magic of a sewing machine, she’s rolled her identities into one amorphous lump of legs, buttocks, breasts, and arms, accompanied by her shape-shifting pooch. I’ll always remember those seminal, famous, oft-reproduced oils that imprinted themselves on my childhood consciousness but as she says ‘it’s hard to always be the same person’, especially over such a long and productive artistic career.