The shark has been a recurring theme in Cross’s practice for a decade, and here the viewer is met with the shark’s empty skin balanced on a painter’s easel, the underside of the skin has been gilded in precious white gold, below which a thin slab of translucent alabaster that sits in the position of an expectant artist’s canvas, awaiting an act of creativity, awaiting life. The material echoes the once living skin, as it sits above a gallery filled with an assembly of ancient cast iron bathtubs. 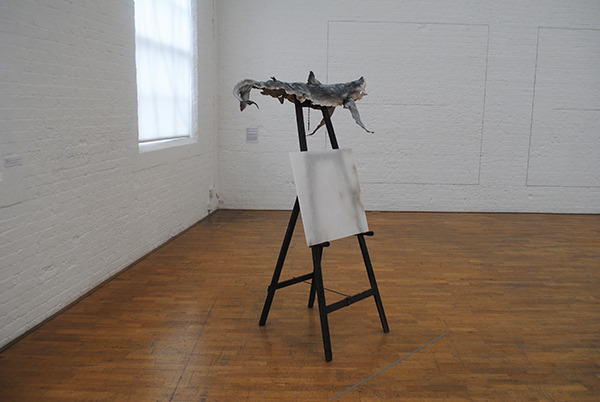 Each of these empty baths form the signifier of a missing body, the invisible weight of which has left behind a gold scum-line where bodily dirt would normally accumulate. The work signifies a poetic temporal passage and the alchemical transformation from dirt into gold, delineating a divide between physicality and time: objects become reliquaries from a past history. The work hovers and vibrates between sculpture and installation. Objects exist in their own universal spheres, as at the same time the viewer is projected into the individual elements, the invisible bodies of those bath tubs become our own. Housed within the wall of the gallery itself – creating a relationship with the tubs akin to alter and congregation – is the ultimate in reliquaries: as a disembodied shark’s eye peruses its flock of empty baths. This is ‘an organ of vision belonging to an animal that remains mostly hidden to humans and upon which we often project our fears’. The perception of an ancient, mysterious and feared creature is juxtaposed with the fleeting existence of our own physical presence in the world, displacing water with an equal Archimedian buoyancy. But here fluid mechanics give way to temporal and existential ponderings, as geological time turns the dirt of our Baconian fragility into gold.