The latest stage in the National Portrait Gallery’s endeavour to reach out beyond its original remit – paintings and sculptures, often of not much artistic merit in themselves, of worthy Brits – is a rather fascinating show of Old Master portrait drawing, lent from other British national collections. Entitled The Encounter, it covers a relatively short span, from the mid 15th century until the mid 17th. Very few of either the subjects or the artists are identifiably British, and a good many of both are in fact nameless. More anonymous subjects than artists in fact: Among the latter, there are indeed quite a few big names – Leonardo, Pisanello, Holbein, Rembrandt. But also there a number of drawings catalogued as ‘Unknown Artist’ or ‘School of’.

The show, though various in human types, has one conspicuous feature or lack of it.

This is in part due to the increasing prudence shown by professional art historians in providing attributions, even when the general circumstances in which a particular drawing may have been produced are known and on record. The exhibition, for example, offers five drawings from the studio founded by members of the Carracci family in Bologna in the early 1580s. Two are given firmly to its most eminent member, Annibale Carracci. Two are ‘attributed’. One more is simply labelled ‘School of the Carracci’. 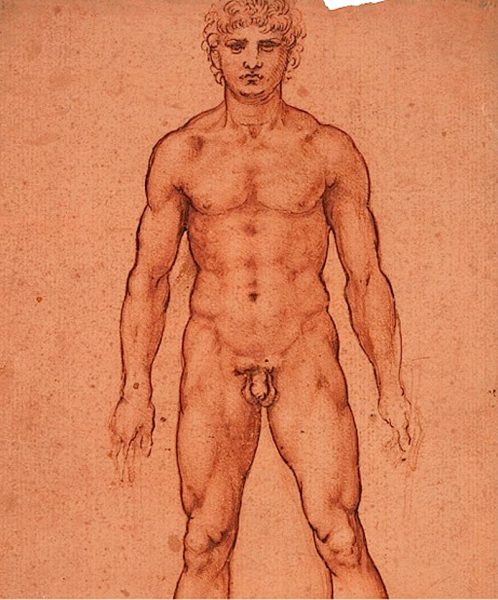 The subjects are very often people who would not, in the circumstances in which the likenesses were made, have rated a professional painted portrait. There are images of children, not always seeming too thrilled to have to sit still and allow themselves to be drawn, There are, in addition, likenesses that are fairly obviously those of young assistants in the studio, which might later be fitted into some ambitious multi-figure composition. The reasons for which the drawings were made seem to have been almost as various as the sitters themselves.

The show, though various in human types, has one conspicuous feature or lack of it. There is a minority of images of women – some by Holbein (the largest group), one by Ghirlandaio, one by Perugino, one attributed to Frans Pourbus the Elder. Plus a rather strange drawing attributed to Van Dyck, of a woman with her head on a pillow, staring up at the artist; and the likeness of a formidable elderly dame, cheek propped on fist, glaring at the portraitist, which is attributed to Jordaens. This imbalance reflects both the social circumstances of the time, and, even more so, the circumstances in which informal art works of this kind tended to be created. Making art, no matter what the actual subject of the image, was throughout this period very much the business of men, and studios were a masculine habitat. If women went there, more often than not it was assumed that they came to take their clothes off. During the earliest part this period, however, even this was not necessarily a given.  Female figures could be modelled by pretty young male apprentices.  The ‘encounters’ the show records – a meeting and mingling of essences, a momentary collision of psyches – are things that happened primarily between those of the male gender. Which, in turn, tells you a lot about the European society of the time.

There was also, I noted, a slightly strange, unaccountable hiatus between what one saw on the wall, and what one finds in the handsome catalogue. The catalogue offers a couple of very fine oil sketches, intended to illustrate the transition from drawing to painting. One is of a Bearded Old Man by Annibale Carracci. The other, by Rubens (the only work by Rubens included), is of a black man wearing a turban and seems to have been made in preparation for an Adoration of the Magi. Both come from a private collection. Neither work is present in the show. Their absence is to be regretted. Particularly that of the Rubens, as the exhibition, therefore, has nothing to say about encounters between different races. The catalogue tells one that Rubens probably portrayed a member of an official Congolese delegation that visited the Papal court in 1608, at a time when the artist was living and working in Rome.