Duchamp And Dali – Royal Academy: This provocative little show at the R.A., done in parallel with the same institutions big retrospective for Jaspers Johns, asks a number of questions about both the past history of the visual arts avant-garde, and about its current travails.

The exhibition examines the relationship, personally much closer than is usually realised, between two iconic 20th-century artists

The exhibition examines the relationship, personally much closer than is usually realised, between two iconic 20th-century artists. At the same time, it raises questions about the whole notion of avant-guardism, though I’m not certain that these questions were always present in the minds of those responsible for putting the show together. To put it bluntly: they remain true to the faith, whereas I am not certain that I join them in this. The just-closed Frieze Art Fairs tended to suggest, as one trudged round them last week, that the hey-day of the kind of avant-gardism that Duchamp and Dali had in common, despite their manifest differences, is now well and truly past, and that nothing convincing had been found to replace it. Frieze offered plenty of attempts to be provocative in either Dalinian or Duchampian modes (more usually the latter, because less skill in the process of making was required), but not much is the way of results.

At the R.A. itself, one small but eloquent silence was there to undermine the message of the show. Duchamp’s famous Fountain was duly present, a ready-made urinal, flat on its back, but there wasn’t a whisper in the labelling to tell you that this, presented as an art work, was not originally Duchamp’s idea, but that of an eccentric female artist, Elsa von Freytag-Loringhoven.

As Wikipedia tells one: ‘Duchamp indicated in a letter to his sister Suzanne, written in 1917, that a female friend of his had sent him the urinal for submission to Society of Independent Artists Exhibition: “Une de mes amies sous un pseudonym masculine, Richard Mutt, avait envoyé one pissotière en porcelaine comme sculpture” (“One of my female friends, under a male pseudonym, Richard Mutt, had sent a porcelain urinal as a sculpture.’ 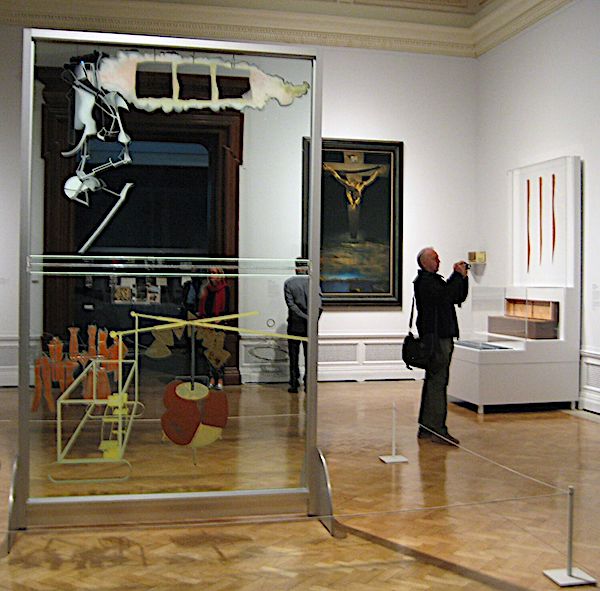 Von Freytag-Loringhoven, in turn, seems to have intended the gesture as a topical protest against the USA’s imminent involvement in World War I. She was pro-German.

This convoluted back-story tends to undermine, not only one’s view concerning the real significance of this particular object but concerning the status of readymade artworks in general. It doesn’t help that the Fountain one sees here comes from a later edition, this time one definitely fathered by Duchamp himself. The version submitted to the Independent Artists a century ago is lost.

For me, the most eloquent moment in the R.A.’s display was maybe intentional, but on the other hand once again perhaps not. The show has Richard Hamilton’s exact copy of Duchamp’s Large Glass – in this case, the original still exists, but having been dropped and shattered in the dim long ago it’s now too fragile to travel. Today, the version offered might rank, not as a Duchamp original, but as a Hamilton ‘appropriation’, just as Duchamp himself seems to have appropriated von Freytag-Loringhoven’s work. Times have changed rather rapidly, and so has our critical vocabulary. As the saying is, however: ‘Plus que ça change, plus que c’est la même chose’ – a phrase coined in 1849 by the half-forgotten French critic Jean-Baptise Alphonse Karr.

Through the Large Glass, one sees, if one stands in the right place at the R.A., an undoubted Dali original – his late Christ of St John of the Cross (1951), lent from the Kelvingrove Museum in Glasgow.

Dali based this painting on a drawing made by the 16th-century Spanish mystic St John of the Cross, a major figure in the Counter Reformation, but also, as he later explained, on a dream.

‘In the first place,’ he said, ‘I had a ‘cosmic dream’ in which I saw this image in colour and which in my dream represented the ‘nucleus of the atom.’ This nucleus later took on a metaphysical sense; I considered it ‘the very unity of the universe,’ the Christ!’

Buying the work in the early 1950s, the then director of the Glasgow Museums made a shrewd bargain. He acquired not only the painting itself but the intellectual property rights to it, including the copyright, for the modest sum of £8500, since of course repaid many times over. Mammon and mysticism were never more shrewdly allied.

The purchase was not entirely popular at the time. A petition against it, arguing that the money should be spent instead on exhibition space for local artists was presented to Glasgow City Council by students from the Glasgow School of Art – later, of course, a hotbed of artistic innovation in the 1990s.