The current Ed Moses paintings on display at Blain/Southern represent only a snippet of a very varied career. His presence there is a tribute to a (very) Old Master. Moses died last year, aged 91. By that time, he was already long-established, as a leading member of the Californian school of artists who had come to rival the big names whose studios were located in or near New York. His work became well known, not just within the USA, outside of as well as within the West Coast art-scene, but internationally as well. There was an Ed Moses exhibition in London as long ago as 1972, which is to say, almost half a century ago.

There is probably no such thing as a typical Moses painting

The paintings on view at Blain Southern are late works, ranging in date from 1988 to 2014. The majority were made in the 21st century – after the millennium. They are big meaty pictures, though as it happens, outdone for sheer size by one of the paintings by Qin Feng, the veteran Chinese artist who founded MOCA Beijing. Qin Feng is, like Moses, an abstractionist, influenced in his case both by Western painter such as Robert Motherwell, but also by traditional Chinese ink-painting and Chinese calligraphy. The gallery handout claims that certain aspects of Chinese philosophy link the two artists: “Another idea important to both artists is inaction, or ‘acting by not acting’, expressed by the Taoist concept Wú Wei, which creates a space of stillness, or void, in the painting – and the mind of the viewer.” 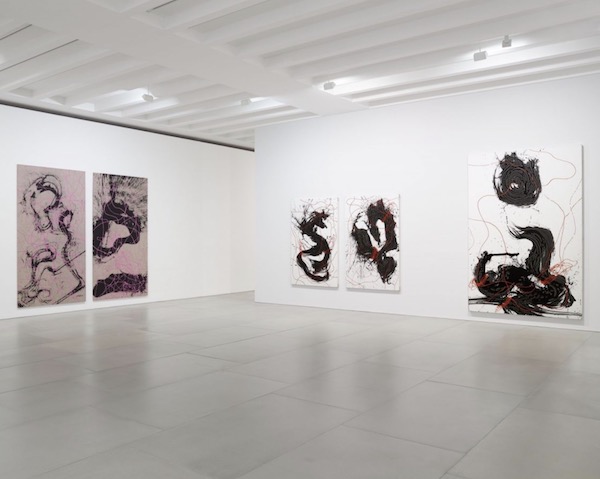 The truth is that it is often quite challenging to tell which painting is by which of the two artists whose work is on view. It’s only on repeated inspection that one can distinguish one from the other. Then it is Qin Feng’s work that begins to feel more calligraphic – with wriggling dragon shapes in black. However, the difference takes quite some time to sink in.

What this hiatus did, where I was concerned, was to make me wonder about the continuing importance of abstraction in Western art. More and more Western abstract works seem to exist in an area isolated from what is taking place in Western visual culture looked at as a developing entity. One significant factor in this has been the computer screen – the screen you are looking at now, reading this. Primary forces in the digital world have been images. Images recognisable from what we are familiar with from what surrounds us when we are not looking at a screen. Where the Chinese have characters, which compress the real world into symbolic forms, we now have an increasing range of emojis – much less sophisticated, and with more immediately recognisable derivations from what we encounter in reality.

Though Ed Moses is in no sense of the term a Minimal artist, he may, like other big-name American abstract artists of the second half of the 20th century, be subtly drifting away from us.