Though we have plenty of experience of and access to American art here in Britain, this means chiefly American art from the 20th century. 19th-century American art, where British collections are concerned, tends to mean examples of the work of John Singer Sargent and James McNeill Whistler. Moreover, then, of course, just across the Channel, safely housed in the Musée d’Orsay in Paris, there is Whistler’s famous portrait of his mother (1871). Of earlier American art there is not much to be seen in our national institutions. Specifically, not in the collection of the National Gallery.

The Thomas Cole exhibition entitled Eden to Empire currently at the NG is therefore extremely welcome, as it features the work of the man who was perhaps the most important and gifted American artist of the first half of the 19th century. It contains not only the paintings universally regarded as his most important works, specifically The Oxbow (a.k.a. View from Mount Holyoke, Northampton, Massachusetts, after a Thunderstorm), and the five canvases of The Course of Empire, but a wealth of comparative material by related artists. 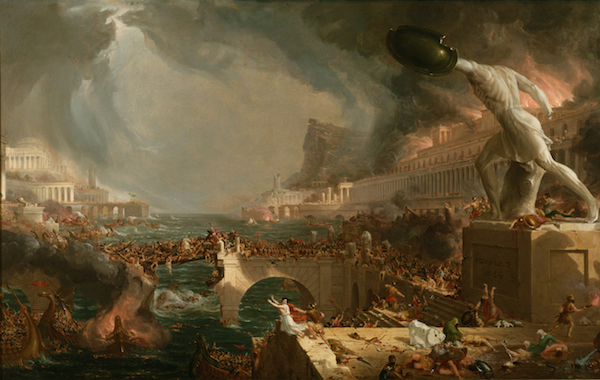 The pity of it is that it doesn’t have an easily accessible catalogue. There was a previous version of the exhibition at the Metropolitan Museum and related to this there is a handsome folio-sized hardcover publication available in the NG’s bookstore, price £50. Too big and heavy to lug around the show, and in any case, not a price most visitors to the exhibition will want to pay. Yes, there are wall-labels, but for such a complex exhibition, featuring quite a number of comparative works by other artists, many not well known to British visitors, this isn’t nearly enough.

Cole was American, but not American born. Born in Britain 1801, he emigrated to the United States with the rest of his family in 1818. As his official biography, placed on the Web by the National Gallery of Art in Washington informs one, he began a career as a painter in the mid-1820s and met with some success painting American landscapes, but became dissatisfied with doing simply this. “His ambition was to create ‘a higher style of landscape’ that could express moral or religious meanings.”

In pursuit of this aim, he returned to Britain late in 1829, to study the Old Masters. There he met both Constable and Turner. Later, before his eventual return to America, he travelled to France and Italy, making lengthy stays in Rome and Florence. It was during this period that he conceived the Course of Empire series, finished soon after his return to the States. The idea was to create “a multi-part landscape series tracing the rise and fall of an archetypal civilisation.” 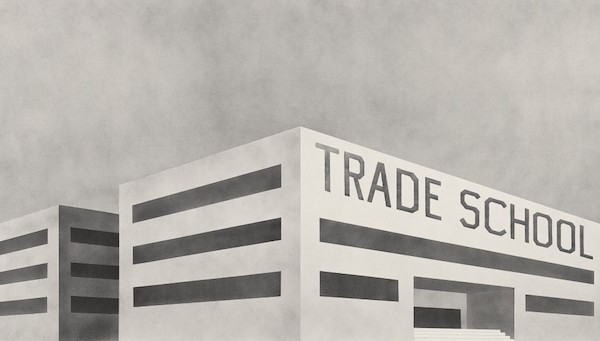 He travelled once more to Italy in 1841, returning to settle in Catskill, New York, close to the Hudson River. He continued to paint American landscapes, but also laboured on a series called The Cross and the World, about “the individual’s quest for spiritual knowledge and salvation”. This was left unfinished at his comparatively early death in February 1848.

What one has here is, if one looks at the story of American art since Cole’s day, a strangely familiar story, though expressed visually in very different forms that would be chosen now. American art has always had a strongly moralistic element. One finds it in unexpected places, not only in the work of leading 20th-century Regionalists, such as Thomas Hart Benton but more unexpectedly in Andy Warhol’s Car Crashes and Electric Chairs and Jean-Michel Basquiat’s Skull paintings. Moralism is often combined with a strong degree of pessimism.

This note recurs in a set of ten paintings by Ed Ruscha, which the NG offers as a free extra. Entitled Course of Empire, in homage to Cole. With paintings made in pairs, a few years apart, it suggests that physical changes in the contemporary urban environment are seldom changes for the better.

Cole’s paintings are a lot more complex – there is more meat on the bone – and they resonate more loudly, in my imagination at least. The Oxbow, his undoubted masterpiece, is less pessimistic than the Course of Empire paintings that immediately preceded it. The composition is divided by a long diagonal – top left to lower right. The left-hand triangle is wild and stormy, dominated by dark clouds and a shattered tree. Tucked away in the greenery of the foreground, if you look closely, there is a self-portrait of the artist, looking up from his easel to gaze at you, the spectator. On the right, the skies are calm, and the oxbow loop of the river borders and encircles areas of cultivated land. The message is that, yes, this wild and inhospitable continent can still be tamed, to the profit of mankind.