Anything but a conventional artist, Eddie Peake is a footballer, a musician, a dancer, a graffiti guy covered with spray-paint, a ferocious attention seeker but cramped with shyness and insecurity, he is compulsive, obsessional and occasionally “shit-scared” of performing, as some would scream it out loud on the pitch.
He also finds it staggeringly beautiful to be an artist.

“Concrete Pitch”, showing at White Cube in Bermondsey, is inspired by a concrete recreation ground in Finsbury Park where Peake grew up. It is a playground for sports, a perfect place for congregating, fighting, socialising and all kinds of encounters for people of every age, class and ethnicity.

“I used to treat things like graffiti and football and dance which were not part of my art, but then I had a sort of Epiphany and realised that I wanted all these elements of my life to be incorporated with my art and vice versa.”

Peake’s work is constructed with lacquered spray paintings, dance, sculpted nudity and performance art, where the gallery serves as a stage, a pitch, a concrete playground for grown-ups and can be considered as a place to orchestrate scenarios from his childhood, neighbourhood and multicultural society. 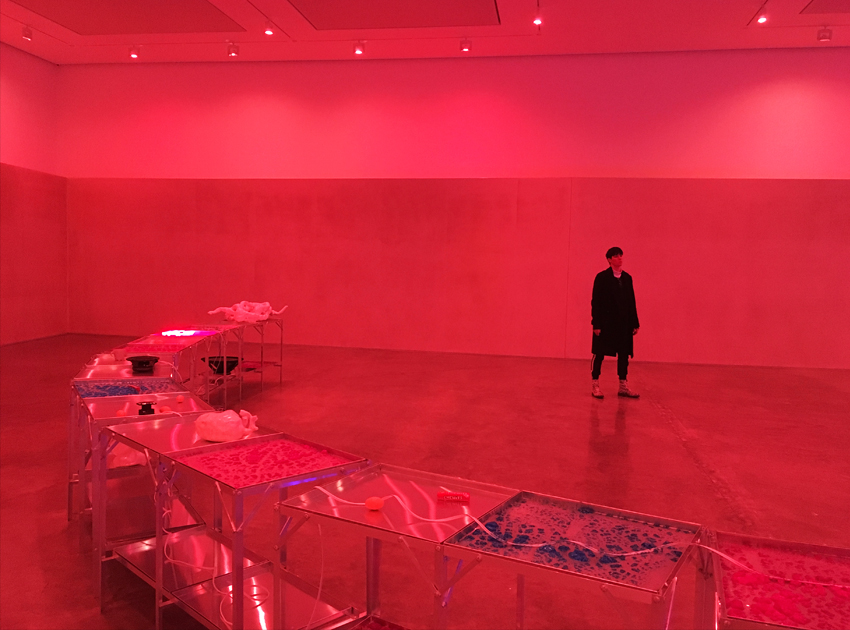 The exhibition is filled with autobiographical elements, juxtaposition paintings, objects, soundscapes and performing art in a constructed an immersive environment. It is also an exploration of self-identity, as Peakes is already on a mission, on a sort of quest for identity. He has a strong desire for the body. His work is his personality and sexuality manifest, and he has undeniable importance of eroticism. 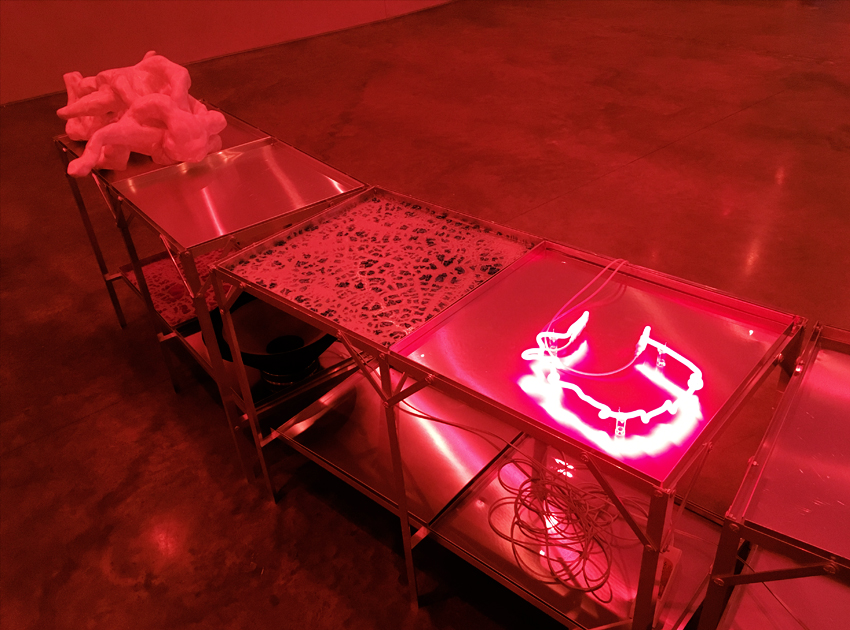 Under the strong pink light flooding the principal room of the gallery a row of stainless steel tables curves through in a snake-shape. On their clinical tray-like surfaces, small objects, sculptures, plaster, hair gels, eggs and neon signs attract the attention as well as small eclectic appliances and turntables purchased from various corner shops on Stroud Green Road. Speakers transmit a deep register, wavering, rattling vibration, using distorted sample recordings, composed by the artist and these abstract soundscapes create a continuously looping traffic-like sound. It’s tense and hectic.
In a specially constructed space, room-in-a-room, DJs from Kool FM (now Kool London), one of the longest running underground stations, broadcast an online radio show, pumping jungle and garage during the entire period of the exhibition. 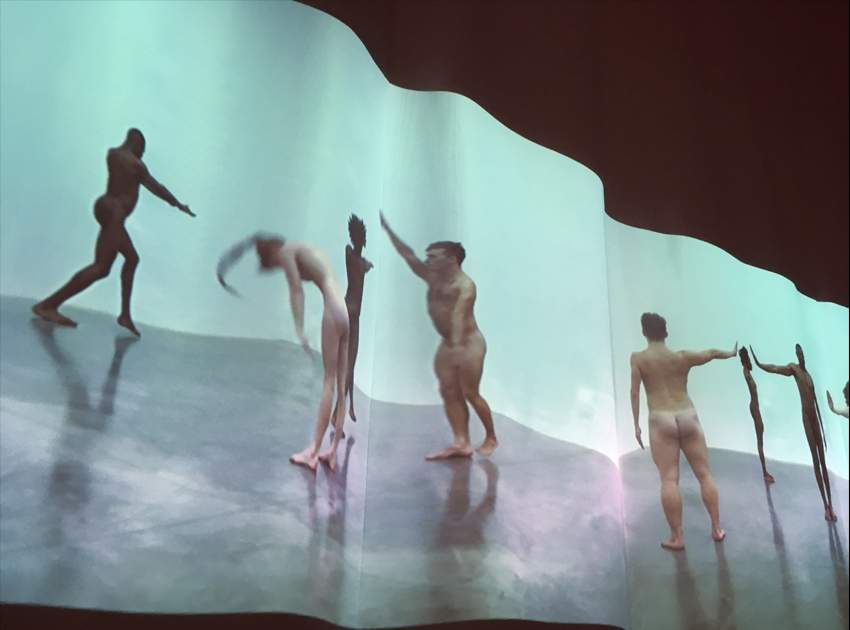 Continuing the game of concealing, a full-length curtain hangs in the middle of the exhibition space creating a spiral passage and in the centre naked dancers are projected in a looping sequence and repetitive movements, reminiscent of the subversive “Touch” or “Duro”, the piece he made at the RA and the latter performed in Paris at the Palais de Tokyo.

Throughout the exhibition, Peake is present in the gallery following a strict scheduled routine, working, performing. He puts himself into a double role and ‘plays’ himself; praising and dismantling his artistic ego. 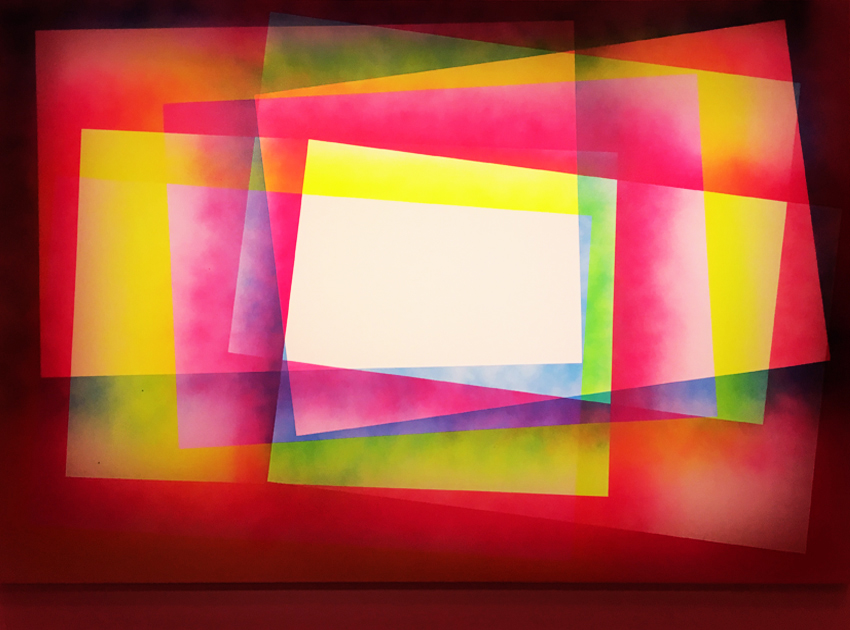 In several new paintings layering and masking are used to create vivid abstract compositions on the canvas and reflective, mirrored-like, stainless steel panels with enigmatic slogans written on them. Overlapping, spray-painted rectangles recall the urban patchwork of flyers, album covers while in others, graffiti-like marks and paintings fall back into what was ultimately a white void, knocking back to some kind of an inner turmoil.

Somehow, it is all a bit of a mess, a big mess, a visual clutter with angry tone of graffiti, social media and urban music but this is Peake’s life on display, his youth, his loves and worries, his depression and vivid ideas; his ART. You might hate this chaos, but he has displayed his work so openly and honestly, that you have no other choice than diving into it and accepting that his scene is not far from our crazy-adult life in London.