The current Paolozzi exhibition at the Whitechapel Art Gallery is, for an old stager like me, a bit of a puzzle. There was a time when Paolozzi was a very big deal – one of the major innovators in British art, the destined successor to the first generation of major British Modernists, chief among them Henry Moore.

Then there came a time, after a rather badly received retrospective at Tate in 1971, when he was out of favour with the real innovators, but still very much a figure in the British cultural hierarchy. He was elected as a member of the Royal Academy in 1979, became Her Majesty’s Sculptor in Ordinary for Scotland in 1986, was given an honorary doctorate by Heriot-Watt University in Edinburgh in 1987, and was knighted in 1989. During this latter part of his career, he made quite a number of major public artworks. Among the most familiar, at least to Londoners, are the mosaic designs for Tottenham Court Road underground station (1982), and the hulking statue of Newton, After William Blake (1995), which adorns the piazza of the new British Library.

Despite this, however, his name does not resonate today, not only like that of Moore but also like that, for example, of Paolozzi’s slightly older contemporary Francis Bacon (1909-1992). Both artists had ‘outsider’ traits as well as establishment ones, but Bacon – ahem! – remains much further out: a much edgier, much more controversial figure, who continues to stir up debate in a way that Paolozzi somehow doesn’t.

The slightly messy effect made by the show at the Whitechapel indicates the edge to which his reputation remains in flux. There is a bit of everything there – items which owe clear allegiance to Surrealism, as the Surrealist Movement continued its post-war trajectory in Paris. Other items that confirm Paolozzi’s reputation as one of the true innovators of Pop Art, before the Americans got there. There are small figurative sculptures, chunky abstract sculptures, lots of collages, designs for dress fabrics, decorations for plates. Pools seem to challenge Picasso’s reputation as an eternally restless innovator, without ever quite getting there.

The truth is that Paolozzi’s allegiances remained with the Ecole de Paris, even when he was busy exploiting the materials and images supplied by American popular culture. As one of the founders of the Independent Group in 1952, he was a genuine precursor, by quite a long way, of the American Pop movement, which did not in fact not emerge until the early 1960s. The fact is, however, that he was looking at the kind of materials and images that American Pop pioneers – for example, Roy Lichtenstein and Andy Warhol – used from a different angle. For him, these images were as exotic as African sculptures had been to the French founders of Cubism. He was in fact indelibly marked by the crucial two years he spent in Paris from 1947 to 1949, immediately after his final student years at the Slade in London. In Paris, he met many of the French ‘greats’ of the immediately postwar epoch: Giacometti (whose influence can very clearly be seen in some of his early sculptures), Jean Arp, Brancusi, Braque and Léger. It’s not going too far to say that some of the early work is the visual equivalent of Franglais. He measured himself against these Ecole de Paris greats in a fashion that Henry Moore, for example, was careful to avoid.

If the early part of the Whitechapel Gallery retrospective is rather dauntingly cluttered, it is hard nevertheless to avoid the feeling that, as it gets less cluttered, it’s increasingly less interesting. The British Establishment got Paolozzi in the end. 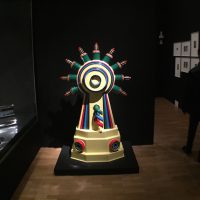 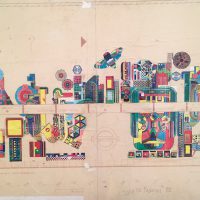 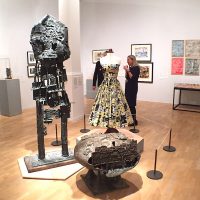 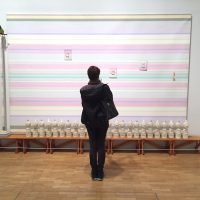 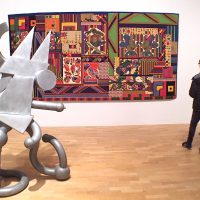 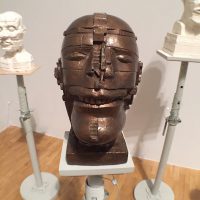