How times have changed! And how much they haven’t! A small but telling display of work by the celebrated Victorian artist Sir Edwin Landseer, now on view at the National Gallery, invites both comparison and cogitation.

Landseer gave his animal compositions an empathetic, moralistic dimension very much in tune with the taste of his day – ELS

Landseer has somewhat sunk in popular estimation. He is not up there in our national artistic pantheon with the likes of JMW Turner and John Constable, or even with more recent art stars such as Henry Moore and Francis Bacon. Yet he was nevertheless a very big deal in his time.

The exhibition at the NG focuses on the most famous of all his paintings, ‘The Monarch of the Glen’, a grandly looming depiction of a Highland stag. Outside, in Trafalgar Square, there are his huge bronze lions, made in collaboration with the emigré Italian sculptor Carlo Marchetti, because Landseer himself wasn’t trained to do this kind of three-dimensional work. They’ve become one of the symbols of our city, much more so than other public sculptures. 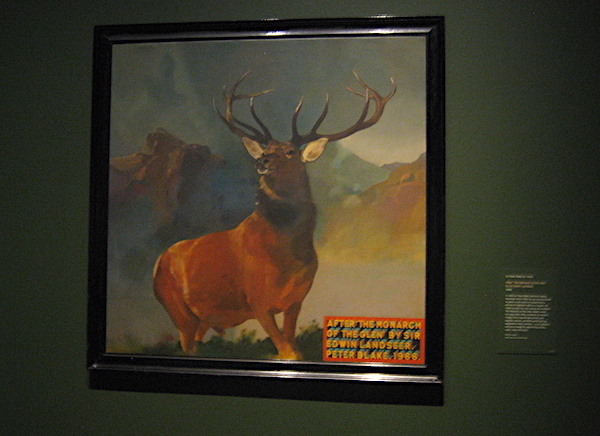 Landseer was the son of an engraver. He became successful very young, exhibiting at the Royal Academy when he was in his mid-teens. Aged 24, he was elected ARA. He became a full Academician before he reached his 30th birthday. No 20th-century British artist has had quite that sort of runaway success,

After this start, there was for a while no stopping him. Much of Landseer’s success came from three very different but inter-related things – first that he fell in love with the Scottish Highlands: something that fitted in with the tastes of Queen Victoria and her court. The Queen though he was “very handsome, but too short.” Secondly, his compositions were widely circulated in the shape of engravings, which had become an increasingly popular way of democratising art and making it available to an increasingly emergent middle-class, greatly enlarged and strengthened by the 19th century Industrial Revolution. Thirdly, there was the fact that he gave his animal compositions an empathetic, moralistic dimension very much in tune with the taste of his day. This moralism didn’t necessarily conflict with the fact that for many years the Duchess of Bedford, wife of one of Britain’s grandest aristocrats, was Landseer’s mistress.

The moralistic, self-justifying dimension characteristic of his work is, though many of my critical colleagues might be reluctant to admit this, one of the things that link Landseer most closely to the artistic climate here in Britain at the present moment.

His success, like that of many artistic prodigies, including very probably that of some of those most in view now, didn’t last in its first and best form. In his late 30s Landseer had a mental breakdown, and after that suffered from depression, though he continued to be productive. The Trafalgar Square lions were created in the 1860s and first unveiled in 1867. By the 1870s, however, he was mentally incapacitated. He died in October 1873,

Landseer hasn’t been entirely neglected in recent, or near-recent times. The display at the NG includes an ‘appropriation’ of the Stag at Bay, about half the size of the original, painted in 1966 by Sir Peter Blake – at a time when outright appropriation hadn’t yet become as fashionable as it is now. There was also a major retrospective at the Tate in 1981.

Nevertheless, this display of Landseer’s work, cheek by jowl with paintings by the very grandest Old Masters of the Western tradition, has a very particular vibe. What it says is: “Come home, Sir Edwin. Moralistic or not. In the present climate for art what you did fits in surprisingly well.”