When I visited art college studios as a jealous English student in the 1980s, the cool, edgy artists had pictures of skinny, edgy women in tea shirts, naked. Their women were angular, anorexic and stiff. I wondered where their inspiration had come from. I learned quickly it was Egon Schiele.

Schiele was undoubtedly an artist of his time, a child of the Symbolist tradition – JCM

This was my chance to see his work in the flesh. And ‘in the flesh’ are words that feel appropriate for standing in front of these drawings of naked human beings.
I feel quite cold although it’s warm in here, in this clean gallery, these expensive, sterile rooms. Yet the work conjures up a very different interior. Beyond the pictures of poor, posing women, I can feel the scratchy, uncomfortable, floorboards and cloth rooms where these were painted. I can smell the musty, foxed paper closed up behind the glass in these frames. These works, when you look into them, transport you out of this formal environment and into somewhere far more dirty and physical. 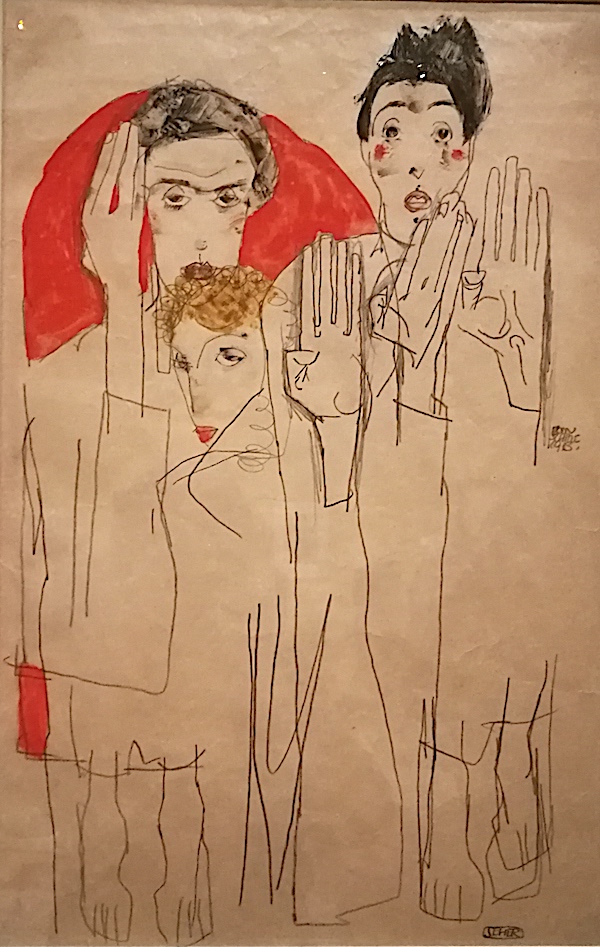 These bodies are physical. That’s obvious of course. But here they are on show for us. They are superb. They are emaciated, stretched, poor, they look destitute. It’s disturbing while we admire the style with which they are so expertly drawn.

Here, in pictures, in this comprehensive exhibition is the tale of how Egon Schiele became Egon Schiele. How he coped (or didn’t) with being Egon Schiele. His journey came to a crash very early with the Spanish flu but his obsessive, single-minded artistic career gives many windows into his development, and here we get a clear idea of the different stages in his progression.

As a student, Schiele learned from Gustav Klimt, an artist considered much more uncool in the 1980s, far more commercial and popular, an artist who used gold as part of his repertoire, an artist who sold out. That was my impression at the time. But we can see how the older artist gave Schiele a model not only for eroticism and interest in female flesh but also for the interest in decoration, in stylised representation. In some of the early nudes the flesh is paternalistic, wallpaper, reminiscent of the drinking and the entertainment clubs, places far below the cultural echelon of the 1910s equivalents of the Fondation Louis Vuitton. This patternistic approach to flesh continues in subtle ways in Schiele’s work. Strange colourful accents. He is known for his anatomical expression, yet many details are not accurate or observational. They might be playful. A little dab of red on the knees and elbows, a smutch of green on a throat and shoulders. The beige, faded paper is perfect for allowing the playfulness of these choices to speak through. It doesn’t interfere in this expression, it soaks into a drab background like the drab rooms of city winters pre-war with their bare floorboards.

And so the complexity that is Schiele emerges from regarding the width and breadth of his work on show. For more information, I am drawn to the self-portraits and the images of named men rather than the racks of anonymous women. During the period when he was in retreat from the authorities, hiding his interest in eroticism, he drew the pianist Roderick Mackey (1913). The tortured artist, thin and concentrated, echoes Schiele’s self-portraits. And they are powerful and strange. There is one that is only a head, the background in white allowing the face to pop out. The highlights on the head work like tattoos, primitive and warlike, showing an intense, otherworldly state being occupied by the sitter, who is of course also the artist. A more famous piece shows Schiele against a light like a twisted, deformed moon or a state spotlight, or perhaps it is more like a halo. He is a saint and a sinner, a holy demon, a creature of the night, born in the clubs of the night. 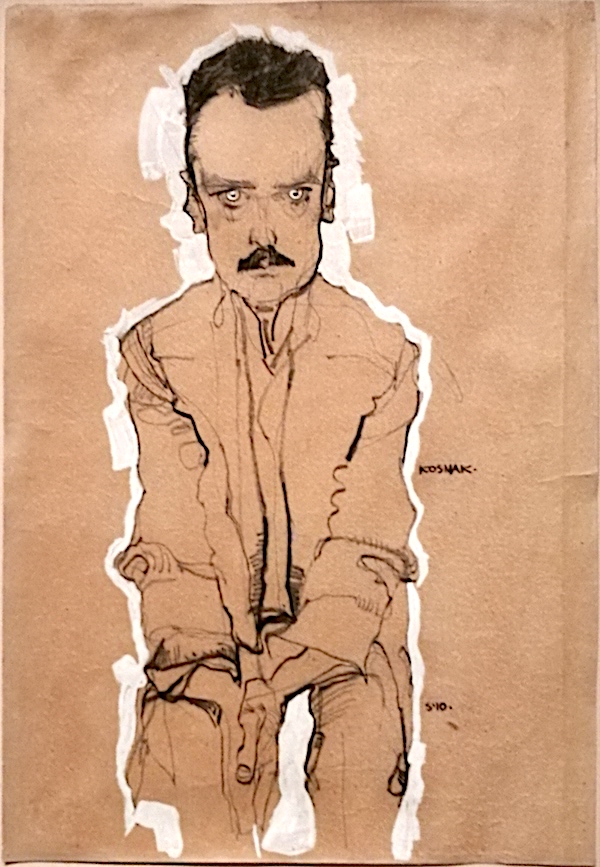 In other self-portraits Schiele is deformed, concealed, his coloured hands and legs emerging coquettishly from behind the blank sheet of clothes. He looks cheekily at the viewer like a portrait of a cabaret artist. Always his hair is windswept and stiff, like a carefully contrived hairstyle dependent on a ton of hairspray, a cabaret illusion of a wild orphan, blown on the moorlands. And going backwards, here is Eduard Kosmak in 1910, the Viennese publisher. Even if Schiele chose to paint Kosmack (five times) for political reasons his portraits fit in with the artist’s view of the creative mystic. Kosmack’s white gouache eyes, the white gouache radiance surrounding the figure in an unearthly glow demonstrate powers that cannot be seen. Kosmak was a mesmerist. He was well-known for his interest in and abilities of hypnosis. Schiele sees himself as something similar. His body, revealed in the self-portrait, has invisible forces blazing through his flesh. Through his physical form, it is apparent to those who have the extra-special perception, energies beyond those of conventional science are humming and thrusting and bursting out, affecting others in ways that cannot be explained by logic and words.

Schiele was undoubtedly an artist of his time, a child of the Symbolist tradition and artist at the end of this strong tradition of nymphs, maidens, holy men, riders, erotic mythology. But if he had chosen a more decorative path or a less realistic subject his legacy would not have impacted us in the dramatic way it has. He was a man who drew women in brothels, legs, arms, breasts, bony arms, young men with overlong backs and twisted torsos. Why did he get sucked into this underworld for his subject matter? Was he encouraged as a student to go and draw in whorehouses because that is where he would find naked forms, and if so, did art lead him into this life? I wonder about the young man embarking on his chosen path, stepping out into these exciting, illicit venues, becoming more immersed, not able or wanting to sustain the distance that was probably expected between him as a young male artist and his young female models.

That desire to eradicate the distance between artist and model, is fundamental to finding his work attractive, for me. I end up quite liking him, still able to admire his work, not destroyed by what I have learned about the artist from this extended exhibition, comfortable in the uncomfortableness of his incredible, bony drawing.