As a new young arts writer, I once went to Eileen Agar’s flat in Kensington. I honestly didn’t know who she was at that time. The flat was quite conventional, except for a few collages on the walls and her famous Bouillabaisse hat – constructed of cork and decorated with a large orange plastic flower, a blue plastic star, assorted shells, glass beads and starfish – sitting on a stand. Sadly, this was before the digital age and I’ve lost what I wrote about her. So, it was with real curiosity that I went along to the Whitechapel to see Angel of Anarchy and realised not only what an interesting artist she was, but how underrated she’s been.

Eileen Agar was one of the most adventurous of her generation.

Surrealism was not kind to women. Despite the creativity of the likes of Dorothea Tanning and Leonora Carrington, the work and even the names of many female surrealists are either lost or unknown. Surrealism was a man’s world despite its ‘high priest’, André Breton writing in 1944 that “it is high time for women’s ideas to prevail over man’s, whose bankruptcy is clear enough in the tumult of today.” Many talented female artists had to battle against their role as muses: Meret Oppenheim standing nude next to a printing press in a Man Ray photograph, the artist Unica Zürn depicted as a tied-up doll by Hans Bellmer. But women were fighting back, beginning to explore their own imaginations and psyches, refusing simply to be repositories for the male gaze and male desire.

Eileen Agar was one of the most adventurous of her generation. Born in Buenos Aires into a privileged family, a rebellious child, she was sent off at the achingly young age of six to board at Heathfield school in England. It was there that her teacher, Lucy Kemp-Welch RA, persuaded her to ‘always have something to do with art’. The rift with her parents grew and she took up a place at the Slade that was, at the time, the acme of traditional, figurative English painting. In 1929 she travelled to Paris, ripe for the conversion to Surrealism, and met André Breton and Paul Éluard, embracing the movement’s sensuality and irrationality, its explorations into the subconscious and the imaginative freedom it gave to explode existing norms.

The show at the Whitechapel opens with a series of stunning works on paper and board in watercolour and pencil, including Self Portrait 1927 and the previously unseen painting of her partner, Joseph Sleeping 1929, that show the influence of her art school education at the Slade. It was in Paris that she learnt the principles of Cubism which, along with Surrealism, were to become the hallmarks not just of modernism but of her future work. These influences can be seen in early works such as Autobiography of an Embryo 1933-4 and Quadriga 1935.

Collage and its sculptural twin, assemblage, were the two techniques that allowed her to collide unconnected images in ways that were witty, beautiful and at times insightfully disturbing. She became a magpie, rummaging in flea markets, and the collector of natural forms – shells, bones, leaves and fossils – that she used alongside cut-outs and drawn elements. “I surround myself”, she said, “with fantastic bric-à-brac in order to trigger my imagination. For it is a certain kind of sensitive chaos that is creative, and not sterile order”.

Fascinated with the natural world, she used this ‘sensitive chaos’ to juxtapose the manmade with the natural world to create provocative collages such as Erotic Landscape 1942. It is hard, now, to see just how radical some of her images would have seemed at the time. Attracted to the coastal rock formations “sculpted by the sea” when she travelled to France, these infiltrated her work in the manner of her contemporary Barbara Hepworth. A Rolleiflex square-format camera became her constant companion. This passion for photography led to some wonderfully intimate photographs of her relaxing on the beach with her surrealist friends, including Roland Penrose and a virile looking Picasso. 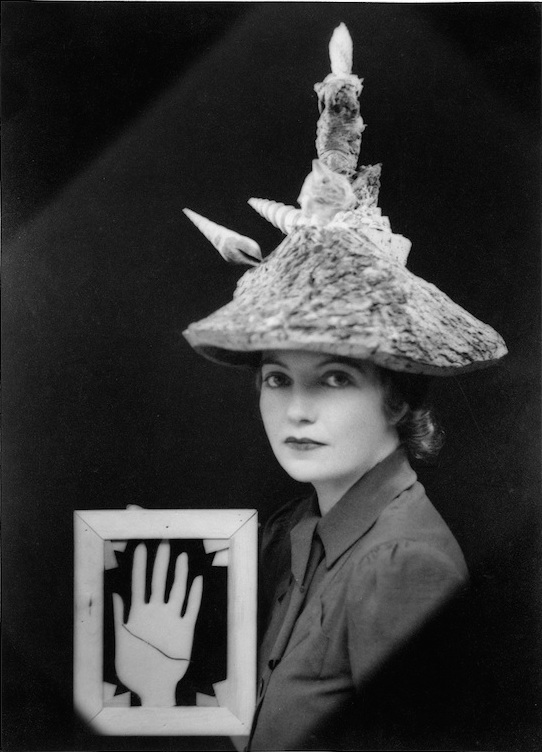 In 1936 Agar achieved overnight success when she took part in the first International Surrealist Exhibition in London at New Burlington Gardens, though the war was to interrupt her artistic output. A pacifist, she enlisted for war work in a canteen in Saville Row and as a Fire Watcher but “felt it impossible to concentrate on painting when you could turn to look out of the window and see a Messerschmitt flying low over the treetops.” After the war, she was ‘exhausted’ and visited both Cornwall and the Lake District in an attempt to replenish her artistic imagination. One of her most eccentric and charming works was her Ceremonial Hat for Eating Bouillabaisse. A black and white 1948 Pathé Newsreel shows her wearing it as she strides through Soho, past giggling delivery boys leaning on bicycles and gawping women with tight post-war perms and even tighter lips who can’t quite believe their eyes, all accompanied by a chirpy voiceover in BBC Alvar Lidell tones.

For the rest of her life, Agar went on experimenting, travelling in the ‘50s to Tenerife, a trip that was to become a watershed in her life. Later, she moved to a much larger studio that allowed her to paint on a scale she’d not been able to before and to work in acrylic. Although many of these later works show the characteristic Agar motifs -shells, fossils and silhouetted forms – they’re more deliberate and lack the verve and playfulness of her early work. Prolific until her death, she was a trailblazer with her experiments in Surrealist fashion design, modelling for Issey Miyake at the age of 87.
Surrealism both infantilised and empowered women. Male Surrealists often portrayed the female form as an object of violent erotic imaginings whilst idealising women as beautiful, mysterious muses. Eileen Agar was able to find her own way through this male terrain, relying less on the Freudian themes beloved by other female artists such as Meret Oppenheim and Leonora Carrington but rather on the opportunities that Surrealism gave her for playful and innovative visual juxtapositions. Long overdue, this retrospective at the Whitechapel will rightly secure her reputation, bringing her to a new generation of viewers.