As one of the participants in the globe-trotting EMPIRE 2 project, exhibiting the moving image on a world tour, I came to Paris for the project’s opening at Le100Ecs, an artist centre at 100 Rue de Charenton. A hundred videos from a hundred international artists based in London have appropriately taken over the ground floor of this communally organised building. Above the gallery, there are studio workspaces available to permanent residents and transitory artists. Taking a few of us curious visitors upstairs, Fabienne Rousseau showed how fashion designers, painters and other cultural workers and artists were making use of the tall white-washed rooms. She told us how members can book four-hour sessions for community prices and showed us how the theatre that was being put together for performance artists for drama development. She explained that, like so many buildings made available to artists, the Société Coopérative d’Intérêt Collectif (SCIC) only had the building on a short-term agreement for six years. Of course, they were concerned about the long-term future. Yet this fear didn’t prevent them from being ambitious and committed, putting in effort and work, much on a voluntary basis, to create a sensible response to the shortage of ateliers available in Paris today.

The multiple screens on the ground floor showed selected moving images from the Empire collection on loops. In Ann Grim’s short, green light watery creatures swim into their future, seeking a solution to the complex morality and ecology of the contested present. In luminescent lines they traverse through blueprints of architecture, exploring possibilities. In the back room, the full collection of films from those artists selected by curator Vanya Balogh to screen on the fringe of the 57th Venice Biennale in 2017 were rolling to a comfortable group of deckchairs. I slacked in the front row with author Lindsay Gordon and discovered qualities I had missed on previous viewings. Made on the set theme of anxiety, the cycle lasts over four hours. Only invigilators and a very few have seen every single contribution in one sitting. 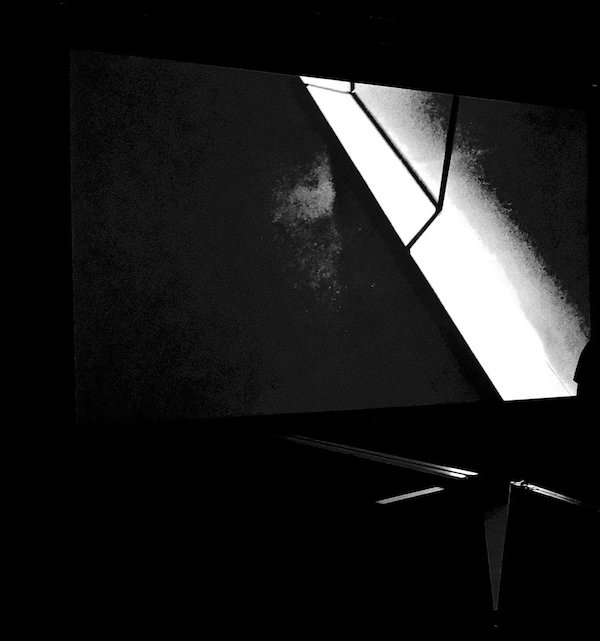 On this day I was struck by Pariah made by Tracey Moberly and Robbie Ryan. This dark short uses documentary-style footage filmed on streets of Calcutta at night and finishes with the twitching body of a rat. The fear of rats and the fear of the outsider are brought together in a symbolic representation of how anxiety can contribute to cruelty through fear. Lindsay Gordon, witnessing the films for the first time, was pleased by the variety and the standard three minute length. He found that each film was fascinating for its different world set up by each artist, but was also pleased that each ended as this world was established and started to become ‘predictable’. This rhythm made the experience of watching work well despite the challenging length of the entire programme.

Earlier that afternoon at the Pompidou I had myself been watching for the first time two different pieces of video art in the main galleries. Taus Makhacheva’s Tightrope (2015), a symbolic meditation on the artistic inheritance of Dagestan, and what it means to contemporary makers to work with the legacy of fine art. A circus performer, in absurd style, carries paintings from a storage holder across a short gap to a mountaintop. The disconcerting way he achieves this is by tightrope. He nudges, pulls and balances these framed canvases of significant characters from history across this mountainous gap in a performance which physically sets out many questions; why, how, who and what is the point of keeping these treasures of art? Each artist has to make art that is relevant for the age in which they live. Are these great pictures really great? Is not the sublime landscape of snowy mountain tops more alive and wonderful than any of these dead pictures. Only the circus performer, with his confident skill, makes these 2D oils seem worthwhile against the stunning backdrop. His movements are riveting. Will he falter? Will he and the paintings arrive safely on the other side of the chasm? How will he carry them this time?

Outside this dark room, other videos perform, quietly and regularly against a white wall. Ismail Bahri’s Eclipses (2013) winks and teases with a shutter of paper, giving glimpses of a landscape beyond in three separate screens. The fluttering of the paper mimics the lid of an eye. Bahri’s video work plays with the science of optics and intermittent viewing, performing simple mechanical interventions on everyday scenes, hiding and showing the world through the lens. His work with the static camera recalls the experimentations of early cinema, a period which avant-garde artists have plundered for their explorations, presumably at least partly because it is outside and previous to the established conventions of commercial cinema. Working with cinema methods often gauchely described as ‘primitive’, like Makhacheva’s work on the inheritance of Dagestan, Bahri obliquely refers to questions of his country. Other works take the viewer with him down the streets of Tunis as in Orientations (2012) where the film-maker walks with a glass of ink through the urban landscape. Here in the Pompidou Bahri’s piece feels unsatisfactory as a single work. Feeling the need to see more of his imaginative experiments I later visited his website to watch his manipulations of various phenomena created with basic equipment and ingredients such as sewing thread and water.

Unexpectedly, on my way exploring the more ancient landmarks of Parisian art and culture I encountered more video pieces. Inside the sublime early modern architecture of Saint-Eustache, I wandered past the pulsating crimson heart of Pascal Haudressy. I stopped to contemplate Heart or Le Coeur qui nous amine, noting how it helped me meditate on religious feelings, its continually moving lines having hypnotised me into standing and staring. The choice of colour felt essential – red on black background. This is an animated drawing, representing the immense subject of time, mortality and immortality. In a cathedral of static art, its electronic spirit of motion had arrested me for standing still and contemplating the process of life and death. It was entirely fitting to see it there, yet surprising. Its presence there begged the question of where else can we show and experience video art. As motion picture advertising advances fast into the commonplaces of our public life and steals our potential for wonder, artists working with moving pictures have to be faster.