Once upon a time in modernism, the interlacing of art and religion was rendered invisible. Art was not just for art’s sake but was exclusively about art. For Clement Greenberg and his followers, art that was pure and autonomous was art that was self-critical and self-defining.

As Mark C. Taylor presciently noted in 1992, one of the ‘most puzzling paradoxes of twentieth-century cultural interpretation is that, while theologians, philosophers of religion, and art critics deny or suppress the religious significance of the visual arts, many of the leading modern artists insist that their work cannot be understood apart from religious questions and spiritual issues.’ Taylor suggests that Greenberg was perhaps the most glaring example of this phenomenon as his writing on the Abstract Expressionists obscured ‘the self-confessed spiritual preoccupations’ of the very artists he analysed. 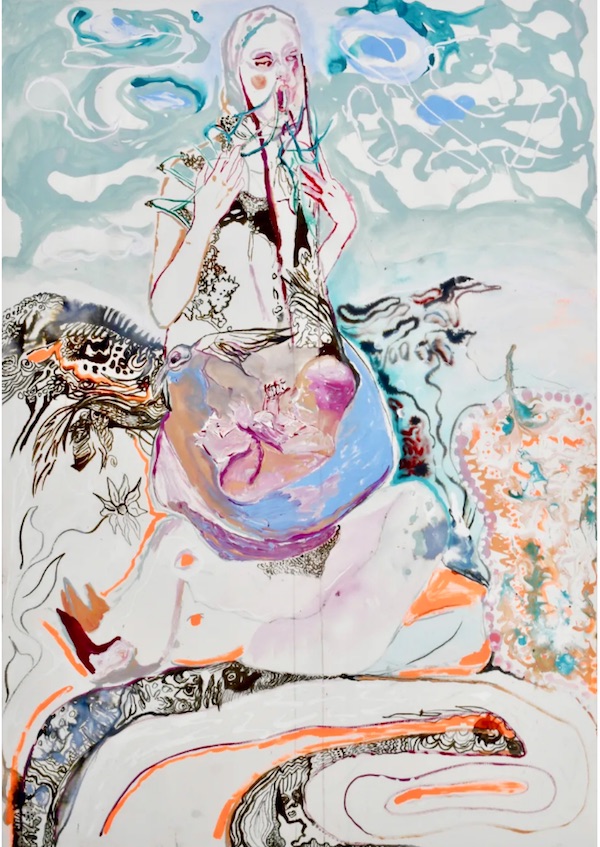 That time is long past as art critics and curators have now caught up with the religious questions and spiritual issues that inform much contemporary art. The question is no longer the puzzle of the paradox that Taylor identified, but what these spiritual preoccupations signify. Reflecting on ‘A Resurgence of the Spiritual in Art’, Rebecca Anne Proctor attributed this trend to the upheaval of living in a time of climate emergency, geopolitical division and pandemic. Times of woe, she argued, ‘inspire a search for alternative understandings of present-day reality.’ Anna Brady writing about Frieze 2019 highlighted a pick and mix approach to meaning quoting Damien Hirst: ‘… today people realise that science doesn’t have the answers, religion doesn’t have the answers, art doesn’t have the answers … we need a hybrid that takes a bit of everything in order to find something to believe in … Everybody’s on the lookout for something that can get them through the darkness.’

Rhiannon Rebecca Salisbury and Arusha Gallery have identified another impetus in creating an exhibition based on Neil Gaiman’s perception that, ‘Old gods never really die; they only wait to be awoken in a new time.’ For ‘Ancient Deities’ they called upon eighteen selected artists to invoke, channel and create an ancient deity arguing that gods and demons are omnipresent in our consciousness, deeply rooted in various mythologies, and reinterpreted in mainstream media as films and TV programmes abound with reincarnations of the old gods.

The fascination with this show is in the choices made and what that reveals about each artist. Agnieszka Prendota, Creative Director at Arusha Gallery, says: ‘I think it is infinitely interesting to see, which deities resonate with this group of artists, how the concepts develop and fall into individual understanding. In the same way as the retelling of myths or in the adopting existing deities by different religions; it serves to illustrate a wider scope for aligned thought. Choosing a deity speaks to so many aspects of ones being, and at its core is devoid of ideology but rather has a scope of voicing and acknowledging the aspects of existence which one yearns to draw and expand within their own practice of art and life more generally.’

By inviting a group of artists whose work excites and inspires her, Rhiannon Rebecca Salisbury hopes to ‘invoke a whole world of otherness, apart from the seen reality around us’: ‘My desire is that the exhibition can offer us visions to access or think about other modes of being, new pathways that are drawn from ancient wisdom, embodied in ideas that predate our current mass belief systems and structures. I hope that the spirit and experience of this show will connect, reconnect, or amplify, the awe-inspiring sense of the unknown which is abundant outside of our normative daily grind.’

By seeking inspiration from an old and primarily reinterpreted and reimagined world order, ‘Ancient Deities’ follows in the footsteps of other artists who are heralded in today’s contemporary art world as pioneers and visionaries by engaging with the breadth of spirituality, organised and esoteric. Artists such as those included in ‘Not Without My Ghosts: The Artist As Medium’, a major exhibition of artists and works inspired by mediumistic methodologies and their deep cultural history. 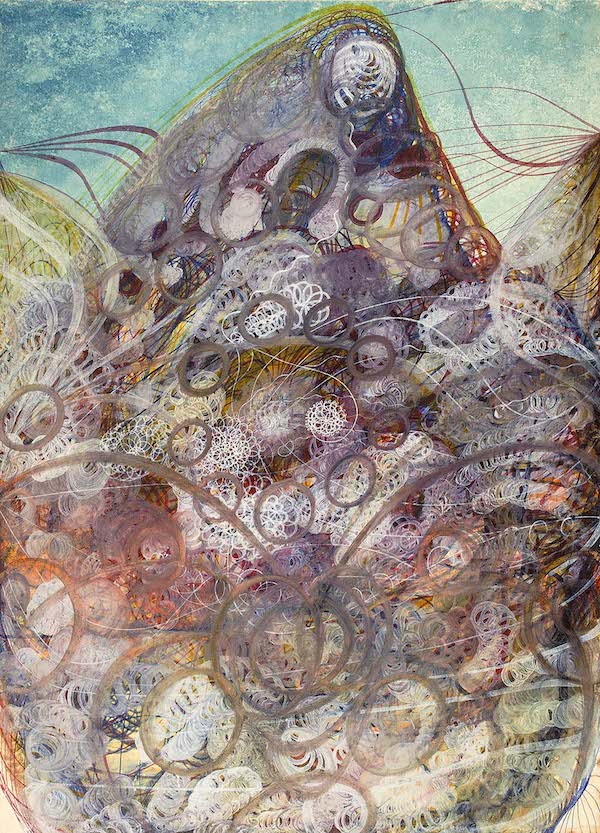 Taking as its starting point the visionary works of William Blake and the largely forgotten Victorian spiritualist artists Georgiana Houghton, Anna Mary Howitt and Barbara Honywood, the exhibition processes through the 20th century. James Brett, who curated a similar survey exhibition ‘The Medium’s Medium’ at the Museum of Everything last year, has said that ‘Blake is probably the spiritual godfather of much of this material.’ Houghton’s work was showcased by the Courtauld Institute in 2016 and has been shown alongside that of Hilma Af Kint and Emma Kunz, as well as that of Agnes Martin and Lenore Tawney, artists whose inspiration came more from Zen Buddhism and other Eastern spiritualities.

Practices of automatism are explored in surrealist experiments and, in work by Austin Osman Spare, Ithell Colquhoun and Cameron, the combination of automatism techniques with ritualised forms of occultism can be seen. Other forms of artistic engagement with mediumship that are explored range from perceived spiritual inspiration and creation during séances and trances, to practices of channelling, and paranormal investigation. Concluding with works from artists such as Suzanne Treister, Lea Porsager and Louise Despont, the exhibition demonstrates how contemporary artists are using the power of the unseen and the ghostly to explore the radical ambiguities of the world around them. As the practices explored challenge traditional forms of art, religion and politics, and are often associated with female artists, the exhibition also considers spirit art and the mediumistic in relation to the history of feminism over the last two centuries.

Spiritualism, with its claim to channel the spirits of the dead, has undoubtedly influenced modern and contemporary art. Yet, as Taylor noted, such influence is true of religion generally whether organised or esoteric, Western or Eastern. Danh Vo is among those contemporary artists interrogating why this should be so.

Working primarily with found objects, Vo shows us traces of the past as he listens to the spirits of the dead. Drawing on personal experience, Vo has depicted the continuing but complicated influence of Catholicism in the present through works like ‘Christmas (Rome) 2012’ and ‘2.2.1861’. The former is a display of velvet fabric initially used to line display cases for religious objects and relics in the Vatican which still shows traces of the objects themselves marked on the material. The latter involves the regular reproduction by the artist’s father of a short letter penned by Théophane Vénard and sent to his father in France, as he awaited execution in a small bamboo cage in Vietnam. The killing of priests like Vénard led to French military intervention, which then led to the colonisation of Vietnam, Cambodia, and adjacent territories. People who believed they were doing good caused disaster. What was inspirational to one brought terror to another.

Catholicism has been part of his life from before his family’s escape from Vietnam in 1979 when Vo was four years old. Phùng Vo, the artist’s father, fervently supported the Vietnamese Catholic leader Ngô Đình Diệm, the first president of South Vietnam. After Diệm was assassinated in 1963, Phùng converted from Confucianism to Catholicism, an act of political protest that ultimately developed into an earnestly held faith.

‘Chicxulub’ brings together many themes that Vo has been exploring over the last decade: the rise and fall of empires; the seduction and violence of Catholicism; the parallels between the export of Christianity and the contemporary travel of multinational brands; and the interconnected nature of life on this globe where each thing is shaped by the reflection of its inside to an outside. As with all his conceptual artworks, he charts the relationship between our inner selves, our desires, and the broader historical, religious, social and political forces that determine them.

The Chicxulub crater is an impact crater in Mexico formed when a large asteroid or comet struck the Earth. It is possible that worldwide climate disruption from the impact caused a mass extinction affecting 75% of plant and animal species on Earth, including non-avian dinosaurs. The press release for the show features a timeline of the artist’s chosen empires or historical events that also changed the course of history, and will be available within a QR code in the exhibition. A description for each event will be added throughout the show, with the full timeline available at the end of the exhibition.

Apple trees, wood-burning fires, carvings from 17th-century Portugal, stained glass windows and religious statues in plant gardens, 1st-century Roman marble sculptures in Johnny Walker crates, cardboard boxes with Coca Cola logos elevated to the status once occupied by Eastern Christian icons by being painted with gold leaf. An American flag made of stacked wood logs, which will be burnt one-by-one throughout the course of the show till its closure, on the eve of the 2020 US presidential elections, are among the sculptural collages here which squeeze together different periods in history and art history. His work, Vo has said, is really through installation exploring how things speak together.

The artefacts he uses no longer have their original function. Still, their life as objects that resonate, speak or have meaning for us is revived and extended into our time and culture through his collaging and installation work. This is a form of resurrection after the dissolution of the culture in which they were originally fashioned. This grafting parallels the history of horticulture in the aftermath of world conquest; hybrid plants brought together to form new, often stronger genotypes.

Vo, therefore, adds another possibility to our exploration of what our spiritual preoccupations may signify. He has said ‘I see myself, like any other person, as a container that has inherited these infinite traces of history without inheriting any direction. I try to compensate for this; I’m trying to make sense of it and give it a direction for myself.’ He takes the traces of history in his personal story and culture and, through installation, performance, sculpture, drawing, film and photography, reconfigure an understanding of ownership and authorial status. In his work history and biology intertwine to create new forms. This installation is a laboratory in which Vo is searching out new forms of meaning and being.

‘Not Without My Ghosts: The Artist As Medium’, The Drawing Room, until 1 November 2020