Everything at Once is the hopeful title of the vast exhibition currently being presented by the Lisson Gallery + Vinyl Factory in the Store Studios space at 180 The Strand. Three full floors of contemporary art, plus something extra on the roof, to celebrate fifty years of the Lisson’s activity as one of the most respected avant-garde galleries in London.

Given how big it is physically, and the very substantial number of internationally celebrated artists it showcases, Ai Weiwei, Anish Kapoor, Richard Long, Tony Cragg, Richard Deacon and Ryan Gander to name but a few,  the show has received only a fairly modest amount of coverage in the print media. A three-star review in The Observer, and a somewhat more enthusiastic four-star one in The Guardian, both of them willing supporters of the ‘usual suspects’ in contemporary art. Beyond that, nothing… 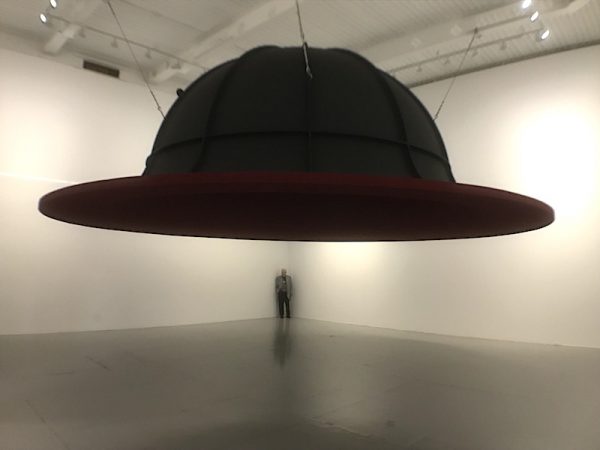 Anish Kapoor At the Edge Of The World II 1998

If you search the exhibition title on the web, you’ll find much more attention given to popular music – a song by the Australian singer Lenka, released in 2012, then an album with the same title by the Scottish band Travis, released in April last year.

Part of the lyric of the song runs as follows:

As pretty as a picture hanging from a fixture
Strong like a family, strong as I wanna be
Bright as day, as light as play
As hard as nails, as grand as a whale

One thing you won’t find in the show is pretty pictures, or indeed paintings of any kind, though there are in fact just a few, of a non-representational sort. ‘Bright as day, light as play’ are also qualities in fairly short supply. So is anything hard as nails’ – anything, that is, determined to last. There are, instead, quite a large number of darkened temporary compartments, into which you plunge to see videos of various kinds. 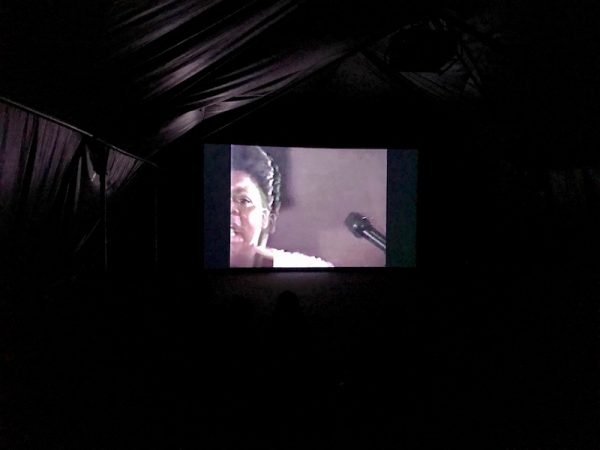 Right up on the roof, and a separate enterprise, presented by Vinyl Factory in conjunction with the Serpentine Gallery, you’ll also find yet another video, this time by Arthur Jafa. Entitled Love is The Message; The Message is Death. It is a compilation of found footage, offering brief, brutal glimpses of racist America, which pummels you in the gut for seven minutes, accompanied by Chance the Rapper’s Ultralight Beam, featuring Kanye West:

This tends to seem more immediately relevant than anything you’ve seen previously in the main show. What it says is ‘this is happening right now.’ And it means it. Nothing in the main show has quite that edge.

Let me not, however, be too negative about the offerings that precede this brutally polemical video, both physically in the form of an exhibition, and also as an event in contemporary culture. The main message, I think – and paradoxically this should not be read in a negative way, is that the art we have now is by its nature ephemeral. Some of the older items in Everything At Once, such as a Marina Abramovic video from the mid-1970s, made long before she ascended to the heights of celebrity from which she is gradually descending right now, already seem incredibly remote. Young, slim and in blurry black-and-white, the figure presented is fading away before our eyes, a spectre at some long-forgotten feast, held before the civil wars that destroyed what was then still called Yugoslavia. 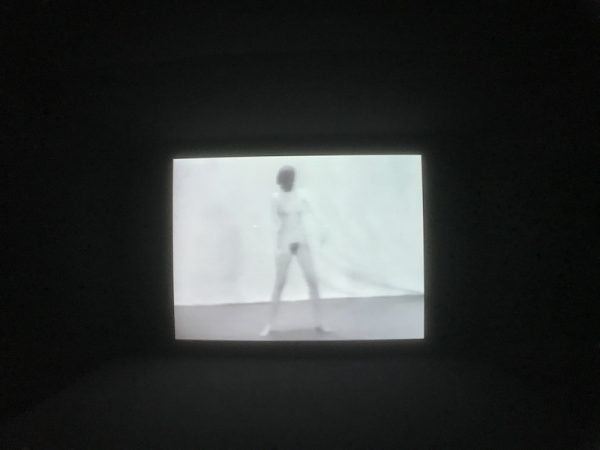 Marina Abramovic video from the mid-1970s

When you visit the main Lisson show, a certain kind of public history is presented. This has increasingly been the function of much contemporary art, especially those segments of it that most aspire to be regarded as avant-garde – not merely in step with, but actually a step or two in front of the epoch that has produced them. But the contexts crumble away almost as soon as the art itself is created. Add to this the fact that modern technology, far from being the friend of durability is in fact its enemy. Not merely in a material sense. Whereas the Greek Titan Chronus devoured his children, for fear they would grow up to replace him, technological progress tends to replace existing images with better, more convincing ones at an ever-increasing rate, and there is no way of dethroning it since it is not one power, but many. We become dissatisfied, not with what we were previously shown, but with how we were shown it. Which does, however, in due course tend to lead to dissatisfaction with the actual content. Perhaps unfairly, this content starts to seem increasingly simplistic.

Being stranded in a number of darkened compartments, or, alternatively, being lured into various maze-like environments, seems to defeat the pleasure principle. We are happy to be, so we feel, in step with our times. But we – or I – am constantly aware of how fragile these mechanisms for instruction are, both in directly physical terms, and also in technological ones, and thus of how unlikely they are to resonate with posterity. Much of Everything At Once is moralistic art. An additional moral is: enjoy it while you can, and while it’s still with you.