I confess I had a few reservations about the Fahrelnissa Zeid retrospective now at Tate Modern.

It follows a now rather familiar pattern of box-ticking, apparent from a number of the exhibitions recently put on by Tate institutions. When the Taties are not trying to be down with the kids – performance art and all that – they are in hot pursuit of the feminist and the multi-ethnic. Fahrelnissa Zeid (1901-1991) conforms to this template. Definitely female. Born Turkish, married to an Arab. She began her long life in Turkey and ended it in Amman, the capital of the kingdom of Jordan.

In other respects, she doesn’t fit. She was born into an aristocratic Ottoman family. Her uncle was Grand Vizier to the Sultan. Her father was Turkish ambassador in Paris, pre-World War I, and her first husband was President of the Imperial Ottoman Tobacco Company, and also a well-known Turkish writer. Her second husband was Prince Zeid Al-Hussein of the Hashemite dynasty, then rulers of Iraq. 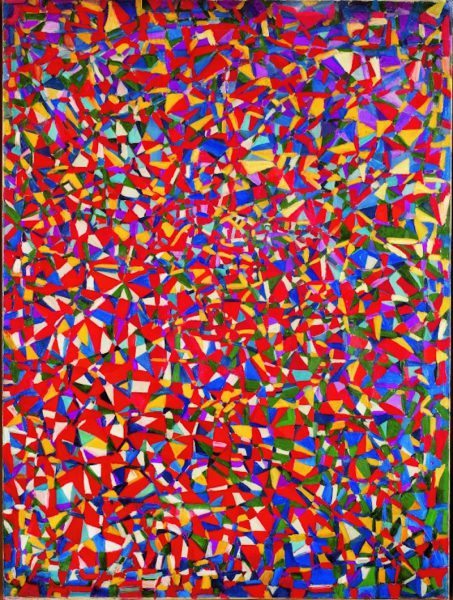 Very soon after their marriage, her husband was appointed the first ambassador of the Kingdom of Iraq to Germany, where the Nazi regime had just come to power. There Fahrelnissa bonded briefly with Adolf Hitler over their mutual interest in painting.

In 1946, very soon after the end of World War II, her husband Prince Zeid became Iraqi ambassador in London. This appointment lasted until 14 July 1958, when the Iraqi monarchy was overthrown in a coup d’état, and most of the royal family were slaughtered. Lucky to escape, Fahrelnissa and her husband were on holiday in Ischia at the time. This was not the only violent event in her life. Much earlier, in 1914, her father had been shot dead in unexplained circumstances by her older brother Cevat, who was sentenced to fourteen years in prison for manslaughter.

In 1969 Fahrelnissa and her husband moved to Paris, where Prince Zeid died in the following year. In 1975 she moved to Jordan, to be with her son Prince Raad, who had settled there. Her grandson, Prince Zeid bin Ra’ad, is the current United Nations Commissioner for Human Rights, appointed in 2014.

During much of the time between and just after the two World Wars, Fahrelnissa was mingling with the various European visual arts movements of the day. She was nothing if not well-connected. She doesn’t seem to have found herself as an artist till she was well into her forties. Even then, she doesn’t seem to have known immediately what she wanted to do. There’s a telling painting in the show called Fight Against Abstraction. Dated 1947, this shows an impatient hand ripping abstract patterning apart. If you look again, you see, buried among the patterning, both a couple of heads, one male and one female and what perhaps looks like a muscular arm (not belonging to the hand) wearing a tight patterned sleeve.

Gradually abstraction gained the upper hand, though often with sly figurative references peeking out, once you’ve trained your eye to look for them.

Some of the paintings are very large, and it’s a temptation to try to fit them into the major impulses that ruled the development of painting at that time – particularly, in the some of the really big canvases, to Abstract Expressionism, though Fahrelnissa never seems to have had any connection with the revolutionary New York art world of the late 40s to 1950s. Very few of the paintings rely for their effect on sweeping brushwork, More typical are teeming mosaic-like patterns that, as the exhibition catalogue points out, have some relationship to medieval stained glass. I found myself liking these quite a bit, not least because they seemed so entirely personal.

What I liked much less, alas, were the primitivist portraits with which Frahrelnissa occupied her old age. The catalogue stuffily warns one against comparing them to Ancient Egyptian Fayoum mummy portraits. So me bad for making the comparison, But the comparison is nevertheless exactly what immediately comes to mind. Despite this, I’m grateful to Tate for introducing me to Fahrelnissa. She’s definitely one of a kind.