I was looking at the tapestries with painted and sewn figures, the colourful designs of pioneering activist and artist Faith Ringgold when I heard a discussion taking place in the next gallery room. Could it be? Yes, it was Faith herself holding court with an excited feminist group informally asking questions and she was answering as directly and pleasantly as I’d always hoped.

Faith Ringgold tells us how she had begun making quilts based on her mother’s interpretation of the slave quilts. How individual characters would need to be sewn onto the quilts. For the first quilt, she did this. We turn around to see it hung on the wall, the figures with different coloured hair, the colourful, childlike, doll-like design. Then she tells us how this was the only one she executed in this way. It was too much work. After that, she began to paint, paint onto the quilts. Paint the figures. And the rest of her quilts were made in this way. After all, she was already a painter and an illustrator.

Born in 1930 in Harlem, New York, Faith Ringgold is finally being celebrated in her first major exhibition in a European fine art institution. She is impressive in person as well as her work. It feels a thrill to be in the room with her, hear her talk so honestly and plainly about her influences and her history of being influenced as an artist. About her intersection with performance art, with protest. About the place of her work and about her feelings concerning other practitioners she admired.

I am not knowledgeable about the slave quilts. Through research, I begin to learn about this powerful art form as well as about Faith Ringgold, the artist. Harriet Powers’s work, a freed slave, and her story told through quilting. I devour sources that show how African Americans may have used a quilt code to navigate the Underground Railroad. Despite disagreements as to how accurate this idea, maybe it’s a compelling narrative. The Underground Railroad was a fact, not a paranoid fantasy of those upholding the government, not wishful thinking by abolitionist historians. It was a network of secret routes and safe houses in the first half of the 19th century used by slaves to escape into free states, Canada and Nova Scotia. The connection of the quilts to this story, even by association with a myth, a legend of a code, gives them an electricity that makes them crackle with static force.

A strip of illustrative faces, graphically simplified, change in tone like a painter’s strip from darkest to lightest. Race, colour, face. Represented by line and paint. It’s neat, powerful and says much about how we live. I can’t help thinking of skin lightening. The destruction of Michael Jackson’s face. How we live with those chemicals being sold to bleach skin. Toxic creams. The politics of pigmentation and how young women’s faces are the key location where that battle is fought. Illegal, harmful, but still rife in South London.

I stop to see the children of America hiding in the jungle. Their faces peer like wild animals. Hunted down. Like the women on the tapestries, trying to escape rape and aggression desperately, fleeing from slavery in the foliage. Today these rooms are full of beautiful, painterly, illustrative representations of terror. America, you have sinned, and Britain too, and you continue to sin although today America is the focus, for you are the target of Faith’s brush.

Oh Faith, you have the right name, as it is you, and others like you, who really show how art and campaigning can be combined. It’s time for me to read her autobiography, ‘We Flew Over the Bridge’ (1995). This exhibition has opened me to revisit your work, which I have only brushed before.
In the shift to concentrate on female artists. Lee Krasner at the Barbican, Dorothea Tanning at the Tate, Cindy Sherman coming to the Tate, where are the young, practising female artists? Instead, we are treated to retrospectives of influential international artists. Some of their work is worth seeing like Faith Ringgold’s undoubtedly is. But I am less impressed by the gallery exhibiting the graphite and ink drawings, the crayon and oil paintings of Luchita Hurtado. 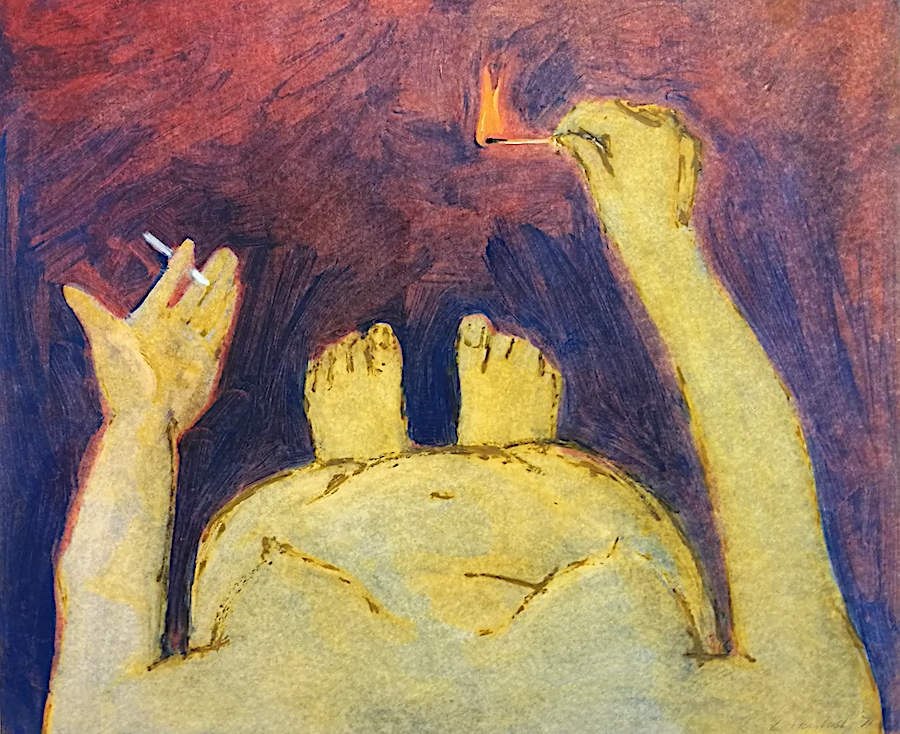 Luchita Hurtado (born 1920 Maiquetia, Venezuela) has had limited exposure as an artist until recently. I keep thinking, as I walk around. I am not surprised. Unlike the strong continuity in Ringgold’s work, it is as if every decade has influenced Hurtado despite their intimacy, domesticity and interest in alchemy. They are perhaps best summed up with an identification with prog rock and hippy culture. Her approach reminds me of design for album covers. The album covers I used to put to the back of the pile.

There are posters in both Hurtado’s work and in Ringgold’s work. I like this aspect. And really, do we want to compare a female artist with another female artist? Once I would have said no, but in this context when both artists are exhibited at the two main Serpentine spaces I can’t help but do it, and it’s an obvious thing to do in this instance. Hurtado’s work is concerned with issues of ecology, using alchemical ideas of transformation and the connection of the female body to the sky. The elements are written out in rough, we’re looking behind the finished art to the raw design. But it does make it look like a foundation art portfolio or the drawings that all commercial and gallery-exhibited artists have in their plan chests but which are not for public consumption. The political power of Ringgold’s activism charges her work, even if it were not so more highly achieved.

For me, the interest in Hurtado’s work is in two places. One is in her use of resist as part of her process. I am a printmaker and so am intrigued by the relations of drawing materials to each other, breaking down lines. This occurs mostly in her early work but peeps through at odd places. The other is her ongoing interest in fire. Now this interests me, her paintings of hobs and matches. The hob is the ancient energy of the house at work and has been downgraded in our minds. But open your mind to the wonder of fire and that wonder burns you with its elemental truth. I thank Hurtado for reminding me of the simple importance of sky and fire. How, wherever we stand and look up, that small patch of sky is infinity it is everything it is the blue of eternal materialism.

Let this be only the beginning of celebrating women’s art at the major galleries. Let us see more support for their work during their development, and in their middle age, and more exhibitions for, by and about feminist and female art while it is ’emerging’ as well as when it is considered to ‘have emerged’.