Do not miss Artist Farsad Labbauf’s new show ‘Revisiting Fragments and Entities’, which opened recently in Chelsea at Roya Khadjavi Projects. This marvellous series must be seen in person to appreciate the dynamic impression of their execution. Mr Labbauf is still using his signature lines. However, this time, rather than separating colour and delineating time’s inability to stand still, he probes the concept from a novel multilayered angle with new media to take an unexpected look.

It’s a juxtaposition of the foreground with the background

In 2001 he visited a collection of statues from the Capitoline Museum’s collection in Rome while they were being housed in Centrale Montemartini. He took pictures of ancient Roman statues, some of which were copies of Greek effigies, many are shattered with missing body parts severed from the complete form they once were. Twenty years seemed to flow through the space of time in which the pictures lay dormant. Like supernatural spectres, the photographs waited to be resurrected from a drawer in Mr Labbauf’s studio, the ancient sculptures dug up once more from a resting place in the artist’s studio. 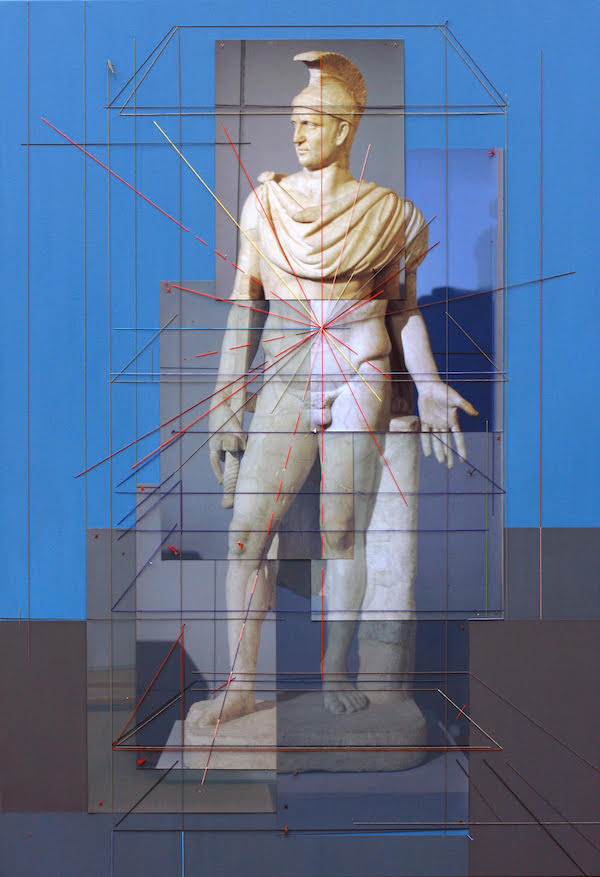 Because of the long and arduous quarantine of the pandemic, time slowed down. It afforded Mr Labbauf the ability to reimagine the old photographs of the thousands of years old statues. The artist put down his paintbrush for this series to explore the flat dimensionality of these photographs. He began tying together the meaning. Regarding them with a mathematical formula, focusing on the abstraction of time and object through the empty spaces that were left in a void, while choosing to use vivid coloured string to define space; creating a unique mandala for each sizable piece encased in a deep frame behind glass. Here Mr Labbauf elaborates on his canny use of thread for this masterful series and why he used this media to make his investigation.

It’s a juxtaposition of the foreground with the background with not only the content of the work but also the space around it. Something I have also been working on in my linear figurative paintings for a long time, an interplay with volumes. However, in these sewings, because of the three-dimensional volume of the thread, the light sometimes casts shadows and as it shifts, it changes the work. Sometimes it even happens as you walk around each piece.

The process of sewing allows for change. The use of threads and the process of sewing/stitching came about organically around the year 2000 when I made my first sewing series. The first collection of works were made from found images. Then, I started creating my source material by photographing different subjects in parts and sewing them together, exposing the thread line. These lines are an integral part of each work. They both construct and interrupt the content at once.

As with every photograph, they are windows in time. The fact that most of the subjects are photographic prints of Roman statues, some of which are copies of Greek statues, adds another layer. The idea of timelessness is something I strive for in my work; an in-between state or a state of flux and transience, similar to existence. Even though most subjects in this series are statues of antiquity, I hope they evoke these ideas. Suspended between absence and presence, completion and dissolution.

I’d like people to look at the work and think about why it’s made the way it’s made. Why it is in segments, and why are some parts missing or overlapping? The connections among pieces, I hope that captures something of the way we look at things. How we experience time, how we experience connections in time, as bodies that are transforming. The way memory is affected by time and how we see and remember things as fragments. In the end, I want it to be in a state of flux. I want it to be finished and unfinished, like life, like how I see life.

‘Revisiting Fragments and Entities’ speak to the fact that time is barbed with stops yet continues to move. We are anchored to the past and present with the expectation of the future. This is all happening at once and continues not necessarily through a linear lens as we might think, as in one day following the next, in its most practical form. One could say the artist is splitting space while linking it all together, bringing us into the awareness that the yesterday of 20 years is as long as the thousands of years old statues, but as young and meaningful as the present photographs in 2021. And will continue beyond Mr Labbauf’s existence, which is all one experience.