I had the privilege to have a private tour and a passionate talk with gallery owner, Amar Singh a few days before he opened “Hiding In Plain Sight”, celebrating female abstract expressionists of 1950s and 60s New York. First time shown in the UK. Curated by Dr John Paul Rollert.

“Where were they, these women? They worked not for fame or fortune, but for one reason only, they were artists” – Dr John Paul Rollert / curator

Amar talks fast and convincingly and before I could ask him any question, he dives into the subject with great enthusiasm.

“The exhibition brings together a collection of works from key cultural female artists of the time – were are back in the 1950s downtown Manhattan, in the biggest market period, when the abstract expressionist movement made New York city the capital of the art world and changed the face of contemporary art.

Female artists, who were consistently overlooked in favour of their male counterparts, deserve their rightful place in art history. What gets the most attention, if you look at the market, the museum collections, that it’s Jackson Pollock, it’s Mark Rothko, Willem de Kooning, Barnett Newman, who have all long been in high demand.

But these are all men! You know them well. The men of the New York School, also known as the Abstract Expressionists, but you have not heard about the women who truly and amazingly worked alongside them, were friends with them, slept with them, married to them. There is a gap, a massive financial gap, and a gender gap where you can take a man and a woman who were married, worked in the same industry, taught by the same professor, the male was in exactly the same museum collection as the female artist, however, the male artist was selling for $150-200million dollars, and works by the women only in the thousands. There is no bigger financial gap in art.” 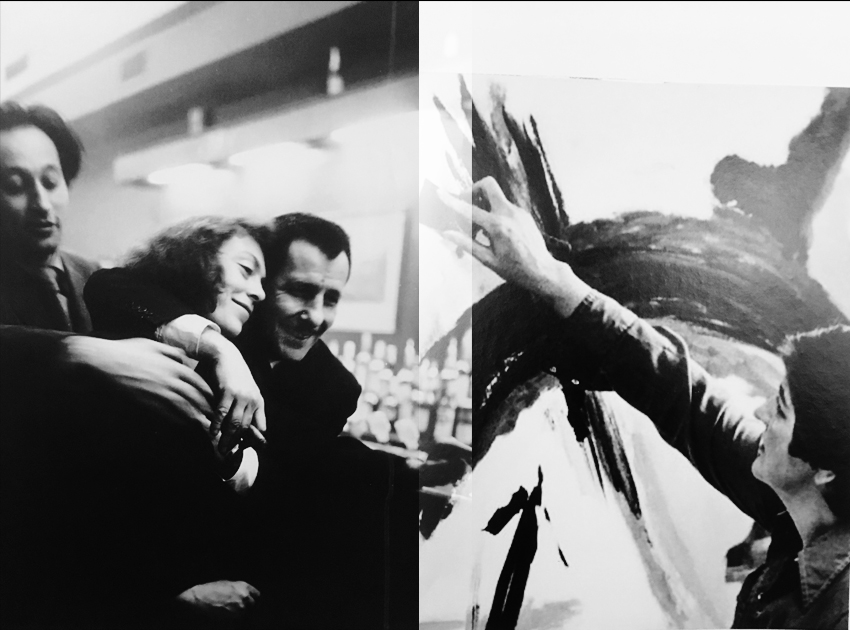 It is time to provoke Amar with some questions: Have there been no great women artists or where were these women? What has created this huge gap?

Amar briskly replies: “I tell you what provoked this gap, Misogyny! These women were hiding in plain sight. What was interesting that a committee was set up in 1951 to admit artists to this monumental show and many of the members from the fifties boys’ club did not want women in the exhibition. Thankfully, some of the artists were part of the committee and wanted their female friends in, and Leo Castelli, the great Leo Castelli, hang the show, which wasn’t even from his New York gallery.”

The current exhibition comprises a unique selection of oil paintings, collages and prints. Grace Hartigan laughing with Rauschenberg, Joan Mitchell, long been the most celebrated of her female peers, photographed with Norman Bluhm and Franz Kline at Cedar Tavern in 1957, and Franz Kline, who designed the “9th Street” poster, which launched the whole abstract impressionist movement to the world, and most importantly in 1951 art moved from Paris to post-war America. Look at the names: Motherwell, Jackson Pollock, Willem de Kooning.

The exhibition is featuring a wide range from post-impressionist landscapes of Lynne Drexler to Elaine de Kooning’s gestural works. Yvonne Thomas who studied with Mark Rothko and Barnett Newman is also ultimately important, then Helen Frankenthaler, who in her early twenties was the founder of colour field aesthetics that placed her in the direct path with Rothko. 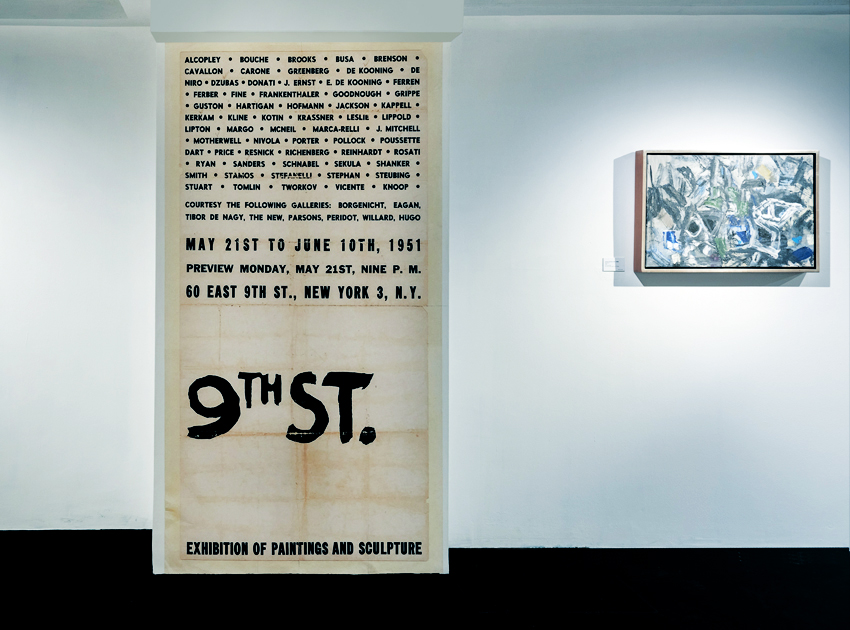 “Yvonne Thomas was also in the “9thStreet” exhibition and after that was included in the series in every single show. A lot of people would not know Yvonne Thomas’s name, but that is the ultimate point of a gallery, a true patronage. In the exhibition, I put Yvonne Thomas opposite of her own work by Yvonne Thomas, next to Charlotte Park who was married to James Brooks. Ethel Schwabacher’s brushstrokes are bold statements and she was not only an artist but also a civil rights activist. Look at Helen and Grace together, they were best friends, and now they are face to face in conversation on my walls.”

The exhibition includes works of Mary Abbott, Amaranth Ehrenhalt, Perle Fine, Judith Godwin, Ethel Schwabacher and Grace Hartigan, who once said:  “A woman or a man creating feel very much the same way and I don’t mind being miserable as long as I’m painting well.”

Helen Frankenthaler, who is in the entrance of the gallery, was the youngest of all in the “9th Street” show, she was only 22, she invented a new staining process, pouring cans of paint across the canvas using brushes and other materials to finish them off. Her monumental images were however ludicrously undervalued. Later the well known and respected Kenneth Noland and Morris Louis borrowed her technic after visiting her studio.

In the curator’s choices, Dr Rollert made a clear selection of artists who have never been exhibited in the UK before, and have never been recognized for their remarkable contributions. At Amar, the visitor is forced to re-evaluate the role of women. 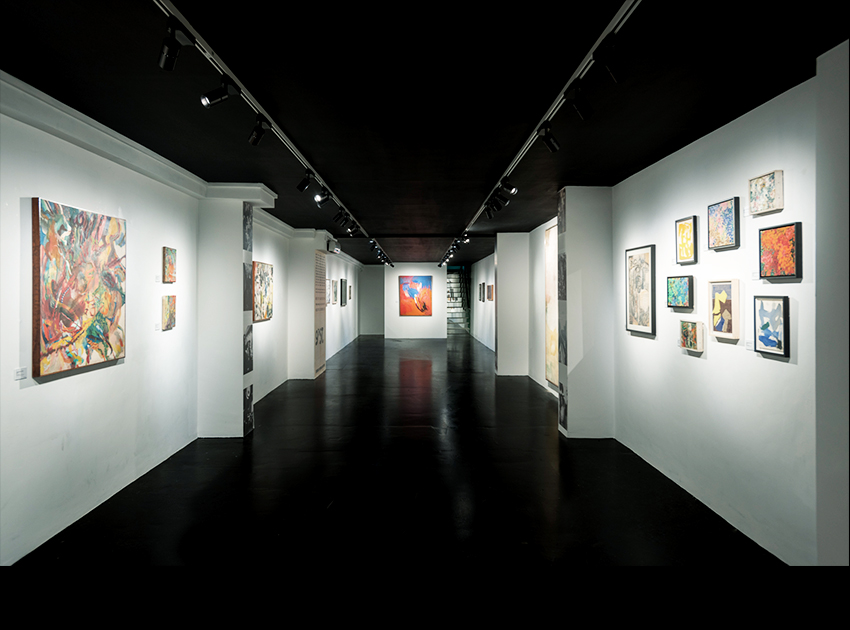 “Look at Elaine de Kooning, it shows the level of misogyny perfectly. Willem in his personal interviews speaks about the artistic power of his wife and how she was an inspiration to him, but auction houses consistently and shockingly undervalued the works of female painters. Their work might not equal up with their male counterparts, but certainly worth more than what the auction records and art history texts show. Happily, it’s all changing, although often the auction houses have no idea how to price these works. In recent years, canvases by Grace Hartigan, Helen Frankenthaler, Elaine de Kooning, Yvonne Thomas have shattered all records. There is nothing emerging about them, these artists are in history books but often written out and so much work has been overlooked due to the gender of the artist. This show is a mission to help to correct the imbalance.”

“… and listen to this, you can put that into your article, I was in Art Basel at a private dinner, was set opposite some people, and within minutes a female art advisor (I whistle her name out), backed up by some over-privileged “white” men said: “I do not agree with your programme championing female artists”. Well – Amar added – you cannot debate ignorance.”

How did you conceive this show?

“I was always interested in the sector and focused for over a year to set it up. The idea occurred during the summer of 2011 when I was actually a student at Harvard and was having a conversation with John Paul Rollert, one of the teachers there, and the curator of this exhibition. We came up with a list of names, then shared the master list and saw what was available. What compelling is that the work is strong and art historically important. These artists are in MOMA but not in any UK collection. I worked together with many private collectors and artists’ estates, went to see them for multiple times, and for the record, even three months ago I did not think that we would get a Hartigan or some other artists, as nothing was ensured, although I already sold these artists before.” 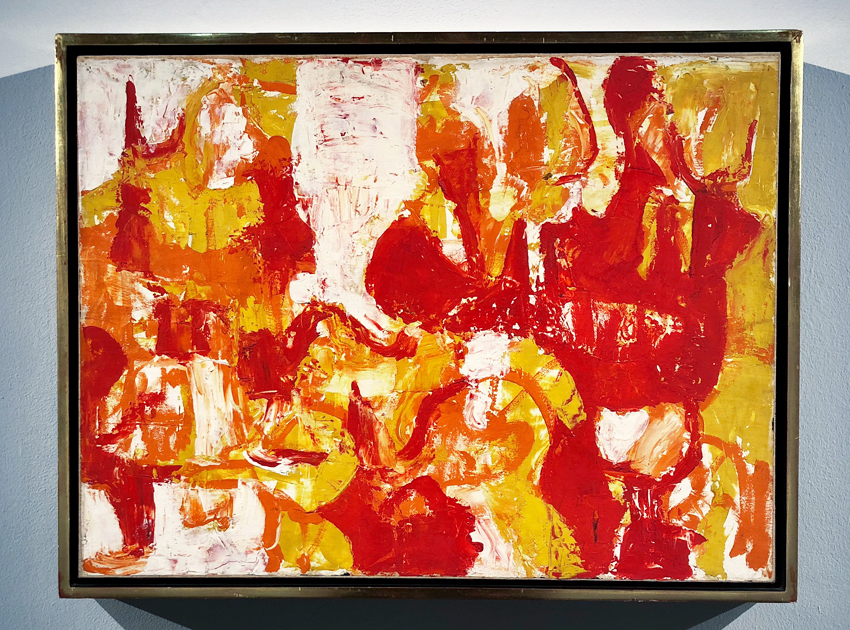 “The Sun” by Charlotte Park / Photo © Courtesy of Amar Gallery

Has anyone ever said no to you?

“I am hopeful for the art world” – he smiles. Amar is definitely a dedicated man and an activist for women’s rights, especially for women’s rights in India, not mentioning his painstaking work for LGBT rights. His cultural heritage is based on spirituality and art tradition, he donates and raises a lot of money to charities, Andrea Bocelli (recently at Phillips London) was amongst them.

Why are you doing this?

“Well, I have been raised this way. First of all, it is a moral issue for me, I have been brought up by very strong women, my mother, my grandmother, and my family has been always big on women. India is still the country where women are repressed. But look, the market is shifting; in 2020 the Guggenheim is going to have a Joan Mitchell retrospective, next year the Barbican is organizing a massive show on Lee Krasner, the wife of Jackson Pollock and Sotheby’s are taking on a lot of female estates.”

On that note, the tireless Amar Singh rushes out of the gallery, his car just arrived, leaving me in a moment of silence under Helen Frankenthaler’s large-scale picture.

Indeed, where were they, these women, celebrated by critics and praised by gallerists? They were just too busy working. They worked not for fame or fortune, but for one reason only, they were artists, they lived to create.