Currently, Huxley Parlour in Swallow Street, a location better known for its restaurants rather than for art, has a show rather mysteriously entitled Figurative Abstraction in Contemporary Painting. It raises the question of what abstraction really is. The word has become a catchall for almost any variety of contemporary art that doesn’t want to be dismissed as being drearily realist – or – worse still – as being so focused on delivering polemical content that the quality of the image – its actual status as a work of art – doesn’t matter too much. There were some rather nice pictures on view, but the show didn’t really hang together to make any kind of story, artistic or otherwise.

Some works were faux naif in a jolly way reminiscent of some of the better British art of the 1930s. For example a large jolly canvas by Eileen Cooper RA. Some were indeed abstract – no question about it. They would have looked perfectly at home hung next to the works by Johnnie Cooper discussed above this brief notice. Others were large and lyrical, with figurative representations apparently in the throes of breaking up.

Looking at the gallery website, after my visit there, I found a very distinguished representation of Modern Movement and contemporary photographers – Cartier-Bresson, Patrick Demarchelier, Terence Donovan, Robert Doisneau, Robert Frank.
It made me wonder, not for the first time, which photography remains so sure of its purpose in life. While supposedly ‘grander’ form of art seems more and more uncertain – not only of what they are doing but of why they are doing it.

Figurative Abstraction in Contemporary Painting – Huxley Parlour – Until 4 May 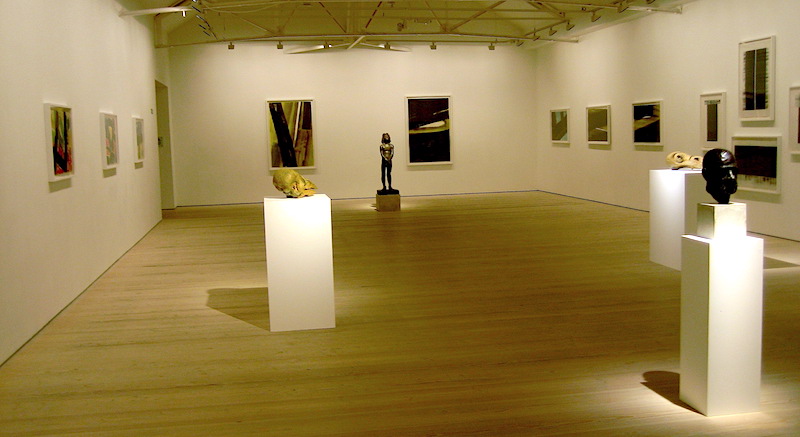 Sean Scully isn’t the only elderly, or at any rate middle-aged, artist currently swimming against the tide with some success in London’s grander galleries. Another instance of this is Johnnie Cooper, with a good show just opened on the top floor at the Saatchi Gallery. Like Scully, Johnnie Cooper is not entirely wedded to abstraction. His show contains a small scattering of figurative sculptures that go back to the 1970s. The paintings are a lot more recent. The title of the exhibition is Throe on Throe, and a handsome catalogue implies that some of the inspiration for it comes from The Listeners, a famous poem by Walter de la Mare:

Never the least stir made the listeners,
Though every word he spoke
Fell echoing through the shadowiness of the still house
From the one man left awake…

A catalogue note by the artist states: “Although there are no intentional references to natural forms in these paintings, they exude a surreal mood of a desolate landscape. The slab application of the paint is also suggestive of decayed structures.”

Hello Mr Turner! There is plenty of evidence here that these paintings, abstract though they may be, owe a lot of the English Romantic Movement tradition, still stubbornly with us after the passage of two centuries.

My reaction is that this tends to work in their favour, rather than against them. The show is suffused with romantic gloom, but it is nevertheless gloom of a comfortingly familiar kind. The artist isn’t rushing around, as some many artists are nowadays, trying to wake us up to urgent political and social problems. There is no banner-waving here. The banners, if they exist, have been rolled up and put safely away in some convenient cowshed. The paintings, though they officially represent nothing that can be found in the external world – no points of comparison are offered – are meditative dreamscapes. What you see, when you are lying awake in the dark, eyes wide open, but seeing nothing. They are indeed deeply melancholy, but also – paradoxically – rather comforting.