You have to be reasonably senior to be an Academician of any sort. Put five together? The result is an exciting and extremely varied show.

The 2 sides show A vivid undulating panorama of simplified mountain ranges and rivers seen at dusk & dawn, brooding blue/purple or sunlit icy white/stone set against red sky, while a fertile plain of rivers and lakes fold outwards. Smart, simple, stunning. Each frame was drawn on the wood by Woodrow, then reduction cut by his master printer. “I can do it, but Umberto is 100 times quicker!” says Woodrow who admits that Norwegian fishing trips provided the topographical inspiration. A keen fisherman he has even made a fundraising print for Wester Ross Fisheries Trust! 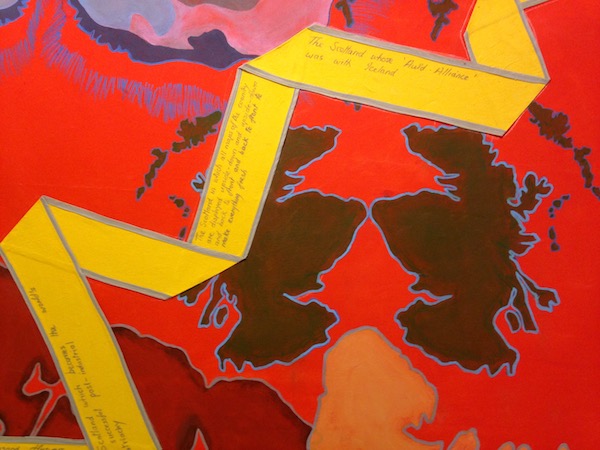 Islands are a recent theme, exploring their potential as “both utopias or dystopias; possible safe havens but also places of isolation. Images of separation & connectedness recur in my work; walls, borders, rivers, boundaries, alongside real or imaginary maps.”

All this new work features her favourite bright red, which she’s used since 1980 when, following a period of monochromatic minimalism, she realised “I’m not a minimalist! I’m a maximum-ist! Then I got into colour big time!” Red’s connotation with warmth, blood, fire, feminism, and of course politics, also suits her fine. Use of the circle comes from her involvement with sewing & the embroidery hoop. Here 3 circular canvases include a memorable “Winter Cities.”

KENNY HUNTER is another key educator, at Edinburgh College of Art. He has also created an impressive number of high profile, public commissioned works including a new Southwark Memorial to War & Reconciliation, London which shows a youth of 14 standing on a huge fallen tree trunk. “You can read it many ways. Does it represent his own truncated family tree? Is he remembering his own childhood before the war?” The fact that the tree is horizontal, lowdown, encourages touch and connection. A period in 1990 studying classical sculpture at the British School, Athens, undoubtedly influenced his approach.

Hunter’s work is traditional without being conventional. His figures are contemporary instance, attitude & dress, clearly, simply defined. Never sentimental, always universal, they are somehow anonymous, everyday folk, “someone you might pass in the street.” He favours empathy over reverence so that his figures have that reassuring monumental quality we all expect & recognise as public sculpture but without its antiquated period aspect.

This is exemplified here by ‘Statecraft’, a young girl standing on a split base. “I want the idea of tension between permanence & rapid change. She’s very grounded, international, modern. I carry the past with me, but I aim for modernity, for the contemporary.” 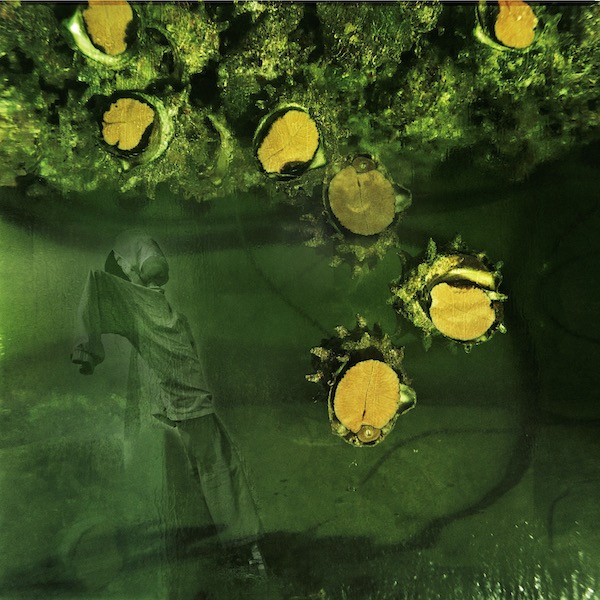 Identical twins JANE & LOUISE WILSON work together, despite studying separately in Newcastle & Dundee respectively. Turner Prize nominees in 1999, they are the youngest, most recent RAs elected this year. I got to know their film & video work in New York via their 303 Gallery. They currently have a 4-channel video installation on East Berlin’s former Stasi headquarters, on exhibition at the Met.

At GPS they show new photos made on S. Korea’s tiny Gapado Island where Shrine worship & Shamanism is an integral part of life. It’s a beautiful island, famous for shellfish like sea urchins which are harvested by female ‘free’ divers who dive deep without oxygen masks.

Gapado is not far from the site of horrific 1948 massacres when 30,000 Koreans who practised Shamanism were executed by the government, yet the Wilsons’ 5 photographic pigment prints have a tranquil, beautiful aura quite at odds with this violent history, perhaps because Shamanistic rituals can involve both protest and healing. A metallic sheen gives “Seaweed Urchin” and “Sea Divers” an otherworldly feel.