Having been downgraded by the early 20th century Modernists, portraiture is now, a hundred years later, making a significant comeback. However, the means through which it does this is now more usually photography than it is painting or sculpture. So much so that we tend to take the marriage between photography and the job of making immediately recognisable likenesses more or less for granted. When we are curious to know what somebody – famous or infamous – actually looks like, we search the web for a photograph.

‘The trouble with Oakland is that when you get there, there isn’t any there-there.’ – Gertrude Stein

London is rich in major photographic exhibitions just now, not all them devoted to portraiture, but all containing at least a few portraits. At the Whitechapel Art Gallery, there is a retrospective of work by the German photographer Thomas Ruff, comprising work made between 1979 and the present. At the Photographers Gallery, there is a long series of polaroids by the film-maker Wim Wenders, also German. The overt portrait element is present but slight. Wikipedia describes his photographic work as ‘emphasizing images of desolate landscapes’. The show can nevertheless be described as a kind of self-portrait of Wenders as a young man, accumulating experiences, recording them image by image.

Finally, there is the show at the National Portrait Gallery for the latest edition of the Taylor Wessing Portrait Prize:
‘For the first time,’ so the catalogue informs one, ‘digital sifting was introduced as part of the judging process…This additional round of judging assisted us in assessing 5,717 photographs that were submitted by 2,423 different photographers.’ 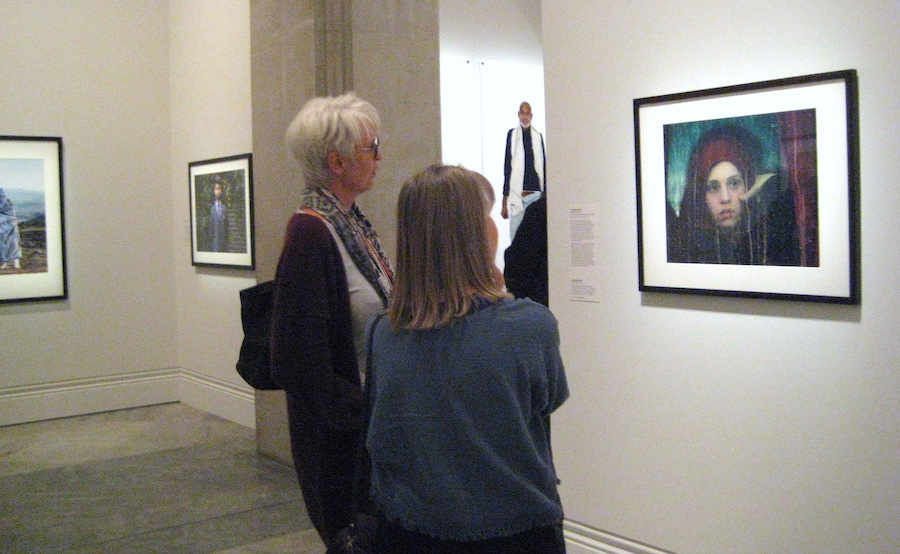 At the NPG you will also find a few examples from Ruff’s most famous series, also more extensively shown at Whitechapel. Entitled simply Portraits, and made in the 1980s, these consist of the kind of identity image you might find in someone’s passport, blown up to semi-billboard size. Directly frontal, staring fixedly out at the viewer, they have an eerily unsettling effect. What they immediately remind me of a line from Empson’s poem Let It Go,:

‘It is this deep blankness is the real thing strange.
The more things happen to you the more you can’t
Tell or remember even what they were.’

More peripherally, they carry an echo of Gertrude Stein’s description of the city of Oakland, California: ‘The trouble with Oakland is that when you get there, there isn’t any there-there.’

This effect in portraiture is not entirely new. In fact, it has a distinguished pedigree. Visitors to the NPG will encounter a version of it in some of the portraits by Cézanne which are also currently on view at the same institution. Obdurate blankness is the prevalent quality in the great artist’s numerous likenesses of his wife. In a long marriage, he seems never to have managed to penetrate any region of her inner self. To offer a variant on Stein: ‘Cézanne’s portraits of Mme Cézanne tell you nothing about her because there is nothing to say.’ Ruff’s big portraits make the same statement about their subjects. 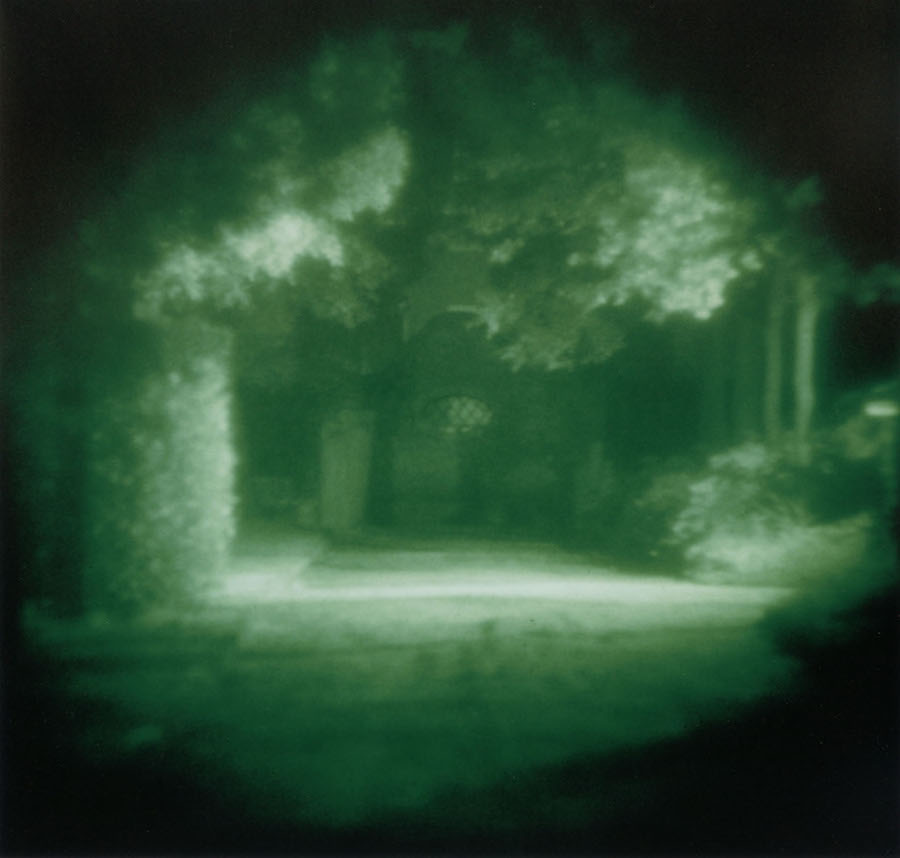 The Ruff show starts off with some jolly images of the youthful artist romping with items of furniture, but basically it is often much less concerned with what he saw (the subjects of his enlarged portraits) than with what can be done with borrowed images: e.g. images of the night sky made with powerful electronic devices, or else with devices that can be used in situations where the human eye can’t, in fact, discern anything much – e.g. infra-red photography. There are also abstractions called Substrates, quite good of their sort, which offer little clue as to what the camera actually recorded; erotic images that are artfully blurred, and images of the 9/11 Twin Towers in New York when the planes hit – made by somebody else and ‘treated’ by Ruff, who wasn’t present at the catastrophic event.

What the exhibition the beginnings offers is an instructive dictionary of what you can do with photographic images with the right equipment to make them (or simply with access to interesting source material made by somebody else), and the right software to alter them, but no very pressing engagement with the actual subject matter. Photographic itself is the basic subject, not what the photograph shows. 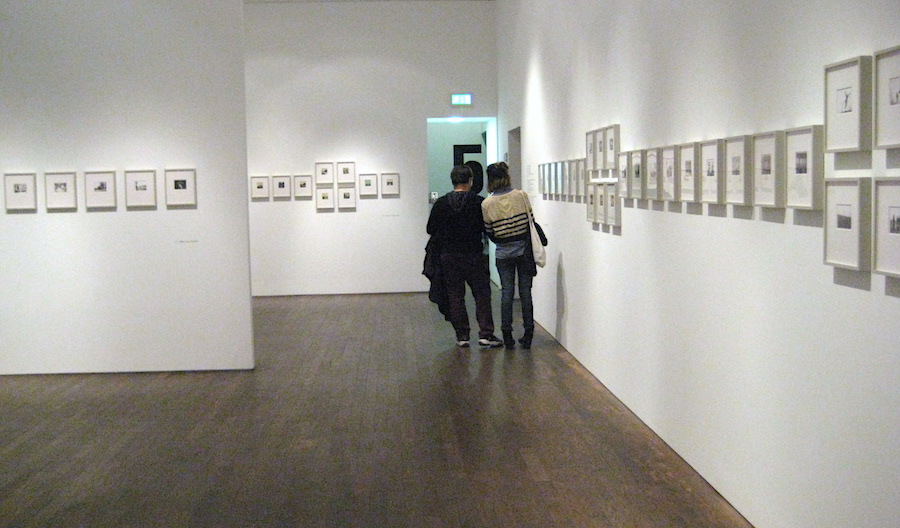 Wenders’ polaroids at the Photographer’s Gallery are a different matter. There is no doubt that they are a personal, subjective record of the process of a film-maker’s growing up. Polaroids belong to a very particular technological moment. Like the daguerreotypes that marked the beginnings of photography, each polaroid picture is a unique artefact. To duplicate it exactly, you need to use another process, for example, a scanner – one that involves translating the image into a totally different medium. The polaroid process enjoyed a relatively short life of widespread use and popularity, though it is now sometimes revived for what one might describe as nostalgic, antiquarian reasons.

For Wenders, now, it is a reminder of times gone by. As Violetta sings in Verdi’s La Traviata:

‘Farewell, happy dreams of the past,
The rosiness of my cheeks has already gone pale…’ 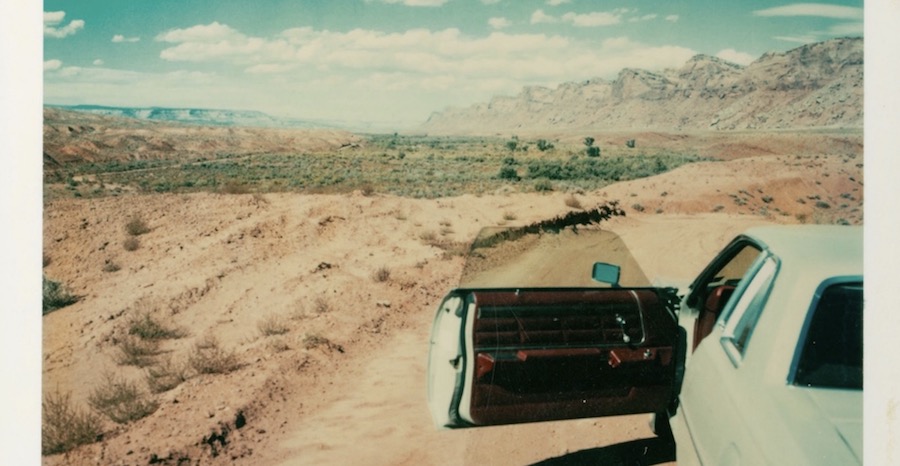 Wenders’ dreams, however, seem to be melancholy ones, not happy ones. The main impression you carry away is of the vast emptiness of much of America, as symbolised by never-ending highways leading towards some goal that always remains out of reach. No single, tiny image makes an impression. An accumulation of two hundred such images, each guaranteed to be unique, does inevitably have an effect.

The Taylor Wessing Prize show represents a more conventional view of what photography is and does. It also reflects the current obsession, in the bureaucratically blessed and managed sectors of the visual arts, in being virtuously moralistic.

The winner of the first prize in the competition is an unsparing portrait by Cézar Dezfuli of a young Somali refugee, glaring fiercely out at you. He has just been rescued from an overcrowded rubber dinghy, about to sink in the waters off Libya. Same kind of composition as Ruff’s portraits, but a totally different message. You know exactly what the subject of the portrait is thinking and feeling. Yes, tick that box.

Second prize was awarded to an image of a woman, behind a rain-streaked pane of glass, seen in a refugee camp after she had fled from Isis-held Mosul. ‘Usually,’ the photographer Abbie Trayler-Smith says, ‘I like to establish a rapport with my subjects, but in this instance, the camp was so crowded that I never had the chance to catch up with her.’ Read her expression. Tick that box too.

It doesn’t make much difference that the third prize went to an image that may, in fact, represent an android. “I wanted to question what it is to be human and what it is to be alive,’ says Maija Tammi,
the photographer responsible.

In fact, the subject of this third prize-winner paradoxically seems a lot more alive and ‘relatable’ that the subjects of the three blank-faced likenesses of young Germans made by Thomas Ruff that you will find on a nearby landing at the NPG.