Artlyst has attended the Foundling Museum, London, currently presenting the exhibition ‘FOUND’ curated by Foundling Fellow and Royal Academician Cornelia Parker. The artist was invited to curate an exhibition of over sixty outstanding artists with a varying range of practices to respond to the theme of ‘found’, reflecting on the Museum’s heritage and collection.

The Foundling Museum was the UK’s first public art gallery and its collection explores the history of the Foundling Hospital, as well as housing works by Britain’s most prominent eighteenth-century artists, including William Hogarth, Thomas Gainsborough, Joshua Reynolds, and Louis-Francois Roubiliac. The works including paintings and sculptures, were donated by the artists in support of Britain’s first home for abandoned children, effectively making the Foundling Hospital the nation’s first art gallery open to the public gaze.

Parker has also brought together works from 22 fellow Royal Academicians including Ron Arad RA, Phyllida Barlow RA, Richard Deacon RA, Tacita Dean RA, Antony Gormley RA, Thomas Heatherwick RA, Bob and Roberta Smith RA, Wolfgang Tillmans RA, and Gillian Wearing RA. This interaction reciprocates the role that the Foundling Hospital played in the development of the Royal Academy. Parker, herself a Royal Academician, took her curatorial inspiration from the intimate eighteenth century trinkets that mothers would leave as a means of identifying their babies if they were to ever reclaim their children – small, personal, and melancholic tokens of desperation. Yinka Shonibare RA, opens the exhibition with ‘Trumpet Boy’, 2010. The work is a sculpture of a child with the artist’s trademark ‘globe-head’, dressed in a Victorian jacket made from African textiles, a signifier of the empire-building of the period. Dominion and the highly contentious issue of migration seem to be aspects of this work, in the context of the Museum. The figure exudes the optimism of childhood, trumpet held aloft – an interesting juxtaposition with the singular identity of the Foundling’s abandoned children, and the latter-day nature of a global identity. The artist found the trumpet on a trip to Portobello Market many years ago, and it is now a signifier of the evolution of experience and the hybridization of identities, that may in fact have been made possible by the Foundling’s interventions. 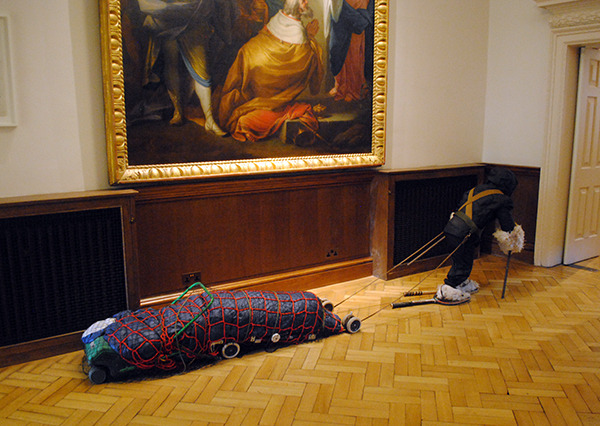 Among the nearly 70 artists on display, Laura Ford’s work ‘Glove Boy 2’, 2002, seems to be the perfect curatorial choice for this exhibition. The inception of the piece came about with the daily school run of the artist and her children. Once Ford had dropped her older children off at school, the artist would wander home through Camden Town with her youngest child, stopping only to pick up lost children’s items: gloves, hats – or anything useful – which Ford would hang on her buggy on the push to her studio. These found objects were then incorporated into a jacket to be worn by the figure of a child pulling a sled. The work is made from everything discarded, and placed in the context of the Foundling Museum and its history. The work mirrors the items left by parents with their children to identify them if ever they were to return. The figurative piece is like an amalgamation of those tokens, an amalgamation of lives struggling through an alien landscape. The work is a signifier, and poignant reminder of the relationship between the Museum’s history as the first public art venue, and Britain’s first home for abandoned children. 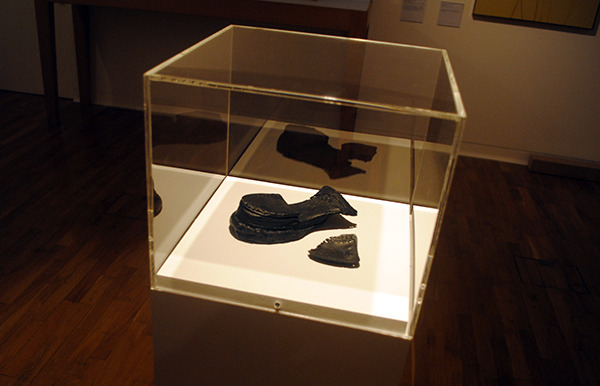 Rachel Whiteread presents ‘Untitled (Found Heel And Toes)’, 2015. The piece was the consequence of a commission to create a work as a response to Governors Island, a 172-acre island in New York Bay that was expanded by millions of cubic yards of material excavated from the Lexington Avenue subway line. While the artist embarked on her commission to create ‘Cabin’, 2015, she came across the heel and instep of an old shoe. From this Whiteread cast the object as a signifier of the integral relationship between the archaeology of the island and the imagined human presence within the cabin. This is the forensic memory of the relationship between the body and its environment, another temporal imprint from the artist that seamlessly transfers its meaning to the museum environment, and more importantly to the history of a particular human presence within its walls.

Artists participating in FOUND include: