London’s posher Art galleries offer exhibitions of all kinds right now, but they tend to have a slightly depressing characteristic in common. The artists concerned are usually either very senior or dead. Few of them are British. The days when the YBAs dominated the British art scene are long over. In a way, this is a tribute to the cosmopolitanism of today’s London art world.

A good example, and certainly one of the most exciting exhibitions now on view, is the retrospective at the Serpentine Sackler for Luchita Hurtado. 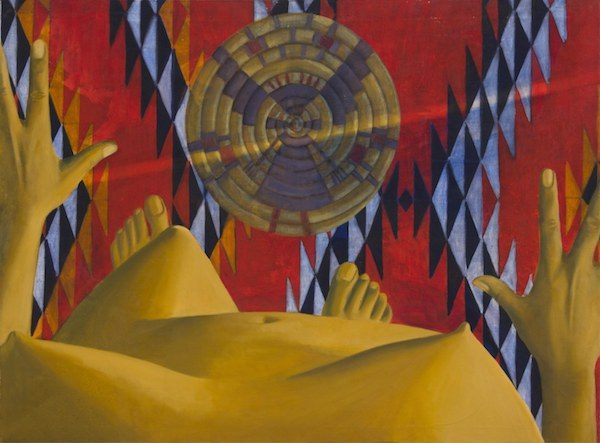 Born in Venezuela in 1920, she has been long resident in California. The Serpentine proudly claims that this event, entitled I Live, I Die, I Will Be Reborn, is ‘her first solo exhibition in a public institution’. One wonders why she had to wait so long.

This is a good solid show, of work by a painter who has gradually evolved a convincing personal language. There is an interplay between figuration and abstraction. In some of the paintings, you seem to be inhabiting a woman’s nude body, pregnant perhaps, looking down at a geometrically patterned carpet. In others, a female torso appears to become the sky, shaped by clouds, and with a few floating feathers. In yet others, words appear – EVE, ADAM and WOMB.

Though the paintings are not derived from any of the big names in Latin American art, certain aspects of them are culturally familiar. For example, the cultural and political activism that runs through so much of the Latin American art produced in the 20th century. Also, the clear signal that women artists expect to be treated as being central to the culture that produced them. In this case, the comparison that comes to mind is not with the Mexican Frida Kahlo, but with the Brazilian Tarsila do Amaral. Though she long ago left the country in which she was born, Hurtado remains in many respects a characteristically Latin American artist. 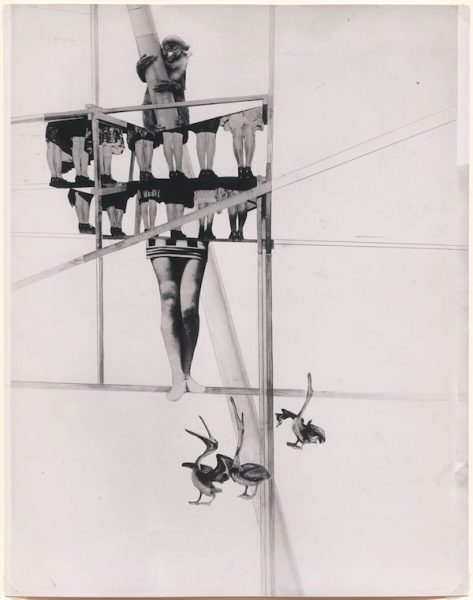 Other exhibitions now on view in London belong to more familiar territory. One of the two spaces in Hauser & Wirth’s big gallery in Savile Row currently houses work by the pioneering Hungarian Modernist László Moholy-Nagy  (1895-1946).  Moholy-Nagy belonged to the first wave of European abstractionists. He worked in a wide variety of different disciplines, as a photographer, filmmaker, typographer, painter, sculptor, graphic designer and stage designer. He was also a writer and teacher. The Hauser & Wirth show offers examples of a good few of his activities, but most of the works on view are on a small scale – souvenirs from what was undoubtedly a significant career. The two items that interested me most were both of them sculptures – small but not diminutive. One was a work made largely of metal, which, as I looked at it, sprang to life and began to rotate. The elements it was made from were geometric. If one insisted on any resemblance, what it looked like was an architectural model – a project for a futuristic building. The other sculpture, made entirely of transparent Perspex, was quite different – all curves and quasi-natural forms. Sitting on its gallery plinth, it looked ready to be blown away, to take its leave and vanish into the atmosphere.

These thoughts recurred when I visited another ‘classic Modern’ show at Hazlitt Holland-Hibbert, 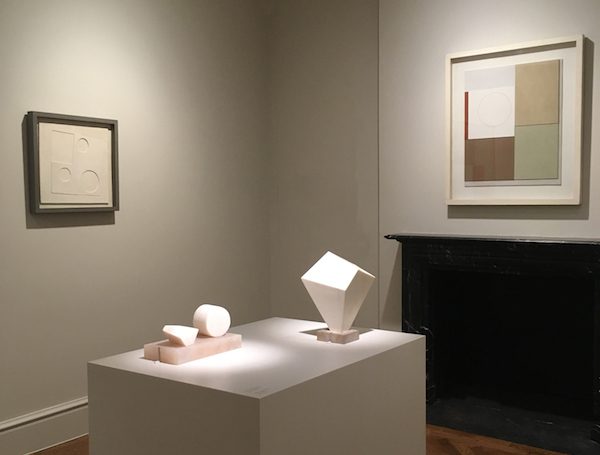 Barbara Hepworth / Ben Nicholson: Sculpture and Painting in the 1930s. Until quite recently, Nicholson used to be thought of as a slightly bigger deal than Hepworth, to whom he was married for a time. In the early 1950s Hepworth wrote to Herbert Read, who was about to publish a study of her work, acknowledging his influence: ‘Ben Nicholson’s work had a profound effect on me, opening up a new and imaginative approach to the object in a landscape, or group in space, and a free conception of colour and form. It often happens that one can obtain special revelations through a similar idea in a different medium.’

Those days of equality now appear to be gone. In Jonathan Jones’ recent book about British art, Sensations, which range from Hogarth to the present, Nicholson is contemptuously dismissed as ‘a dull, dry imitator of the European modern greats’. Hepworth, though she does not rate an illustration, is more kindly treated:
‘Hepworth carved images of genuine beauty. The more abstract her work, the more it seems a magical act of self-expression by nature itself…’

The forms Hepworth used are indeed a little more directly suggestive of things seen in nature than either of the two Moholy-Nagy sculptures I have just described, but they belong to the same universe of Classic Modernism. Today that world is gradually fading away. Its art no longer seems wholly rooted in the culture we inhabit. 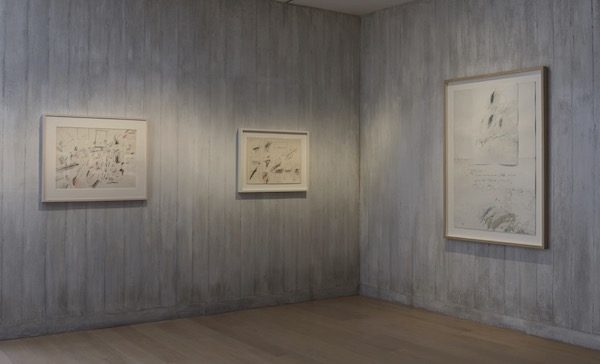 One sign of this breach can be found in the contemporary fascination with urban graffiti. The beginnings of this are well illustrated in a current show at the Waddington Custot Gallery, entitled The Writing on the Wall. It features work by a range of mid-20th-century Modernists, most of them more closely related to the culture of Paris rather than to that of New York: Brassai, Caniaris, Dubuffet. Millarres, Tapies and Twombly. Basically, what one is offered at Waddington are recreations or paraphrases of the then existing language of the street made by more sophisticated hands. Brassai photographed graffiti that he encountered. He didn’t make them himself. Dubuffet adopted the demotic forms of street art to create art brut but didn’t actually paint on urban walls. That time is over. The art of the street has now fully asserted itself. Just a little later in the sequence of development, Jean-Michel Basquiat came along. He began as an urban graffitist but moved on to using more portable supports that would allow him to take place in the current New York art world. Today, however, the transition is complete. What we have now is the pseudonymous Banksy, content to use urban walls as his primary surface. Content, one might say, to paint and run. He attracts far more publicity and discussion than rivals who are content to remain within the boundaries of the art world.