The new Francis Bacon show at Gagosian Grosvenor Hill is something of a landmark event. It contains a sumptuous array of top-quality works. Only a very few of these come from museum collections, so see them while you can.

The show is brutally frank about Bacon’s homosexuality, and about the role that his sexual orientation and interests played in his art – ELS

Entitled Couplings, the show is brutally frank about Bacon’s homosexuality, and about the role that his sexual orientation and interests played in his art. While the overwhelming majority of the paintings currently on view have been seen in public before, their sexual content has never, I think, been so firmly emphasised. The exhibition organisers take pride in the fact that two of the works, produced in the mid-1950s, at a time when homosexual activity was still a criminal offence in Britain, are the most openly recognisable images of sexual activity between men that Bacon produced. At the time when they were made, they were proclamations of the artist’s outlaw status. 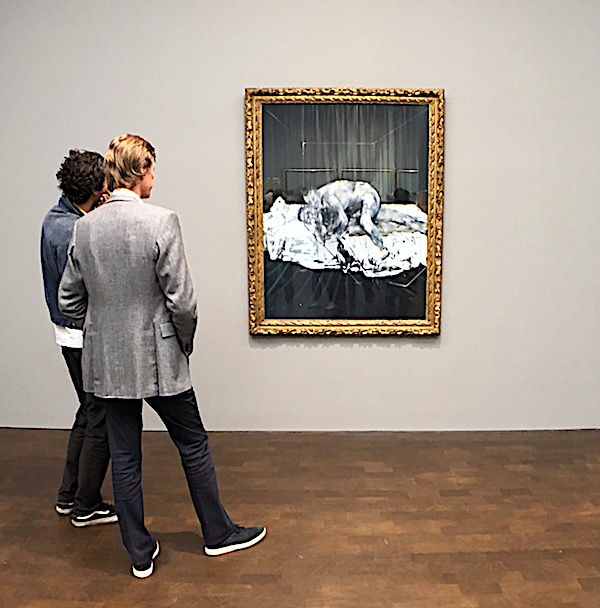 Now you can look at them quietly, no entrance fee required, at one of the grandest commercial galleries in London. The mind reels if you try to tot up the collective financial value of the paintings on view. It comes to hundreds of millions of pounds. If that’s the way your mind works, go to Gagosian just to look at the money. And then think about what the figure you come up with has to tell you about the way in which society has changed, in the space of just a bit more than half a century. Bacon died in 1992, having gone to Madrid in pursuit of a male lover who had discarded him. He was vehemently atheist, and his body was left to science. If his corpse still existed, it would probably be rolling rapidly in its grave.

Bacon’s strategy, so he always claimed, was not to paint from life. The models for these figures were, he said, images of wrestlers made by Eadweard Muybridge, an eminent Victorian photographer who analysed the motions of men and animals by making sequential images of them as they walked, ran, or engaged in athletic activities. They were thus conveniently distanced from the awkward realm of real life. This distancing was partly true, and partly a convenient fiction. It provided a convenient, legally protective, pretext for his coupling male figures. If you chose to see them as representations of lovers engaged in what was, at the time when Bacon first started to make these compositions, a shameful activity, condemned by the law, also by all members of so-called ‘decent’ society, then that was up to you, the viewer. It was your choice to look at them, and also your choice as to how to interpret them.

Now all that is conveniently settled. The shift in interpretation is automatic because society has changed. We go to Gagosian to look at the show, and we know exactly what we are looking at – painted representations of muscular men fucking. The thrill of the illicit has not, however, entirely gone. That is the power of figurative art of a certain type: to make us see more than we are capable of seeing for ourselves, unaided. Bacon ramps up the power of the illicit, even now, when the barriers that once existed have fallen. The pictures – dare one say it? – Are charged with his sense of guilt, embedded in the psyche of a homosexual man of his generation. This is the unsettling gift that he offers to us. Great art has always tended to do this kind of thing, and artists don’t have to be nice human beings to do it. Look at Bacon’s copulating male lovers. Look at Caravaggio’s alluringly, ambiguous street urchins. Would the world, in each case, be better off without these unsettling images? No, I don’t think it would. They both have something quite profound to tell us about human nature.